Acts of insensitivity toward A-bomb devastation of Hiroshima and Nagasaki 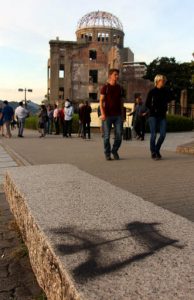 A baseball player from the U.S. major leagues posted video footage of the Hiroshima Peace Memorial Park accompanied by an image of a bomb on his Instagram account. Recently, there have been a number of instances of inappropriate behavior by foreign visitors in connection to the atomic bombings. What accounts for the frequency of these insensitive acts, that seem to disregard the feelings of suffering and grief experienced by the people of the A-bombed cities? We explored the background behind these incidents.

In October, two Bulgarian men spray-painted black graffiti in five different locations in Hiroshima, including the Peace Memorial Park. After criminal papers were filed with prosecutors, the pair professed that they simply wanted to leave something that would serve as a memory of their visit to Hiroshima.

Also, the agent of a popular South Korean pop group called BTS (Burn the Stage) has apologized on behalf of a member of the group, who had worn a T-shirt with a picture of a mushroom cloud printed on it. Lyrics to the dance song “Taki Taki Rumba,” which is rising high on U.S. charts, had included the phrase “Booty blows up like Nagasaki.” When this caused controversy, the questionable phrase was then removed from the song.

Robert Jacobs, 58, a professor at Hiroshima City University’s Hiroshima Peace Institute, stressed the fact that some people take a frivolous attitude toward the A-bombed cities. In such incidents, he said, those involved don’t seem to treat the atomic bombings seriously. Dr. Jacobs thinks that the men who were expressing their excitement over their visit to Hiroshima as tourists, in the incidents involving the video posting and the graffiti, behaved thoughtlessly but without any apparent intention of causing hurt to the people of Hiroshima.

Dr. Jacobs believes that one factor fueling these incidents is Hiroshima’s rapid rise as a tourist destination, and that since the visit to Hiroshima by former U.S. President Barack Obama in 2016, the city has become a popular site for international travelers. According to Mr. Jacobs, as the number of visitors to Hiroshima has grown, their interest in understanding the suffering experienced by the A-bomb victims and survivors, as well as the suffering brought about by war, seems to have declined.

On the other hand, Harumi Okada, 19, a second-year student at Hiroshima Jogakuin University, who has conducted several interviews with A-bomb survivors since high school, said, “I don’t think that the awareness of international visitors, and their sensitivity to the trauma of the A-bomb survivors, has changed much over time. It seems that the difference in the basic viewpoints between Japanese residents and international visitors is now more easily observed because of the widespread use of social networking services.” She added, “There are also some cases where the message made by the person sending it is taken in a different way than that person’s original intention.” She believes that such incidents will likely continue to occur in the future.

With regard to the incident involving BTS, some say that this sort of situation is linked to the difference in perceptions of history between people in Japan and people in South Korea. Son Hyun Jin, an associate professor at Hiroshima City University’s Hiroshima Peace Institute, said that many South Koreans believe that they were released from Japan’s colonial occupation as a result of the atomic bombings and the subsequent end of the war. Mr. Son went on to say that the image of an atomic bomb printed on a T-shirt is merely an image that represents Japan and that the BTS member had no intention of hurting the people of Hiroshima. The professor added that he assumes the adults around the group are seeking to question Japanese perceptions of the past by making use of the group’s influence.

In response to this series of incidents, some say that the attitude of the Japanese people themselves, with regard to the atomic bombings, should be questioned. Akira Kawasaki, 49, a member of the executive committee of Peace Boat, a Tokyo-based NGO, pointed out that thoughtless behavior is a problem not only involving international visitors. “Some young Japanese people make a ‘V sign’ with their fingers when taking photos in the front of the Cenotaph for the A-bomb Victims,” he said. “As memories of the war fade, people’s ability to imagine the thoughts and feelings of the A-bomb survivors has deteriorated.” Fresh in our minds are the shouts for an atomic bomb to be dropped on the Hiroshima Carp baseball team, by some supporters of their opponent at Mazda Stadium in Hiroshima, at the start of this year’s baseball season.

“We should not conclude the matter by simply calling out this inappropriate behavior as inexcusable,” Mr. Kawasaki said. “The people of the A-bombed cities need to think seriously about how best to convey the devastation of the atomic bombings to young Japanese people and international travelers who visit Hiroshima with no particular attention to peace and A-bomb survivors.”