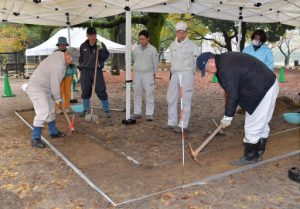 On December 4, the City of Hiroshima started a test excavation and research effort in the greenbelt to the north of the east wing of the Peace Memorial Museum. Any remains found as a result of the excavation of the former Nakajima district, which was completely destroyed by the atomic bomb and buried under the Peace Memorial Park, in Naka Ward, will be displayed. This work is being carried out to locate remains that will be suitable for display and to check their condition. The excavation area will be closed to the public in order to protect all remains. The results of the research will then be reported next March to the city’s advisory panel, which is comprised of experts and A-bomb survivors.

The area to be excavated is to the west of the former Tenjin-machi-suji area, where a lumber dealer, a printing company, private homes, and other wooden buildings once stood prior to the atomic bombing. Two blocks of earth measuring 0.5 meters in width and 5 meters in length, which are located next to each other, will be excavated in an L-shaped configuration. It is expected that any artifacts that still exist in the area will be found at a depth of 60 to 70 centimeters. On December 4, about 10 city staff members used hoes to carefully dig away the top soil of the site.

After a check is made of the condition of the remains at this zone, a test excavation of the east side of the former Tenjin-machi-suji area will begin. If remains are not located at expected places, the search area will be expanded. To convey the destruction of the original Nakajima district, which used to be a prosperous downtown area, the city intends to open the remains to the public no later than fiscal 2020. Haruaki Nakagawa, the director of the A-bomb Experience Preservation Division of the City of Hiroshima, said, “Many people once lived their daily lives in the place that has become today’s Peace Memorial Park. I hope that the excavation will find remains that will clearly show the scale and significance of the things that were lost because of one single atomic bomb.”