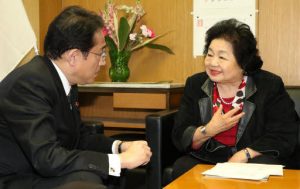 On November 5, Setsuko Thurlow, 86, an A-bomb survivor based in Canada, met with Fumio Kishida, the chairman of the Policy Research Council of the Liberal Democratic Party at the party’s headquarters in Tokyo. Mr. Kishida is the representative of the first district in Hiroshima. Ms. Thurlow, who last year delivered a speech at the award ceremony for the Nobel Peace Prize on behalf of the International Campaign to Abolish Nuclear Weapons (ICAN), a non-governmental organization (NGO), stressed the significance of the Treaty on the Prohibition of Nuclear Weapons and called on the Japanese government to ratify the treaty.

The two talked for about 30 minutes and, except for a short period of time at the start, the meeting took place behind closed doors. According to Akira Kawasaki, 50, a member of ICAN’s international steering committee who also attended the meeting, Ms. Thurlow emphasized that the ratification of the nuclear weapons ban treaty would be a big step toward the abolition of nuclear weapons. In response, Mr. Kishida explained that the policy of the Japanese government centers on first minimizing the number of nuclear weapons and their roles.

Ms. Thurlow is originally from Minami Ward, Hiroshima, and her nephew, who lost his life as a result of the atomic bombing of Hiroshima, is distantly related to Mr. Kishida. After the meeting, she said to reporters, “I repeatedly conveyed my desire for the Japanese government to reconsider the ratification of the nuclear weapons ban treaty. And I appreciated it very much that Mr. Kishida discussed the matter with me in an open, honest manner.”

At a press conference after the meeting, Mr. Kishida said, “I understand her wishes and comments and I was also inspired by her words and her as a person. The goal of the treaty to create a nuclear-free world is the same as the goal of the Japanese government. As a citizen of the A-bombed nation, I must make efforts to help realize that goal.”

On November 5, Ms. Thurlow also met Kiyoto Tsuji, the vice-minister for foreign affairs, at the office of the foreign ministry. She handed him a letter of petition for Foreign Minister Taro Kono that emphasizes the importance of the nuclear weapons ban treaty.

Ms. Thurlow had also hoped to have a meeting with Mr. Kono, but was unable to do so. She said, “It was very regrettable not to be able to meet him, but I don’t know whether he was too busy to meet me or if he was just trying to avoid meeting me.”