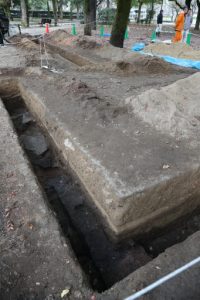 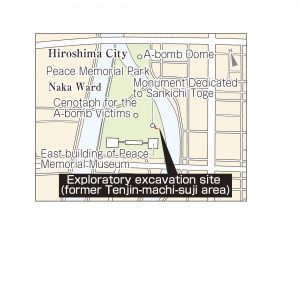 On December 12, it was learned that a piece of asphalt, which was likely used for paving a road, was discovered in the former Tenjin-machi-suji area during the first exploratory excavation conducted by the City of Hiroshima. The area was part of the former Nakajima district, which lies beneath the Hiroshima Peace Memorial Park in Naka Ward. Before the atomic bombing, its streets were lined with shops and homes. The excavation is part of preparations for publicly exhibiting the remains of the former Nakajima district. On this day, the city completed the excavation work and opened the site to the press. After a thorough examination of what they have found, the city will report the results next March to a panel comprised of experts and A-bomb survivors.

On December 4, the City of Hiroshima began the exploratory excavation on the north side of the east building of the Hiroshima Peace Memorial Museum to see if there are remains that are suitable for display and what their condition is like. They dug up the ground in an L-shaped pit of about 20 meters long and 0.5 meters wide. When they reached a depth of about 60 centimeters, they discovered the surface of the ground which probably existed at the time of the atomic bombing.

According to the city, the asphalt and ditch that were found in this excavation were likely part of the former Tenjin-machi-suji area. These remains can provide clues to the traces of streets and buildings from the old district that existed before the bombing. Charred pieces of wood and pieces of stone structures were also discovered during the excavation. The city plans to investigate the connection between these artifacts and the houses and buildings that were destroyed or burnt to the ground in the U.S. attack.

The city is also considering the idea of carrying out a second excavation at a different location on the north side of the east building of the museum. When they report the results to the panel, they will discuss with panel members whether this is a suitable location for public display in order to convey the daily life of the people in the old district before the bombing and the inhumane nature of the nuclear weapon that took everything away. The City of Hiroshima hopes to open these remains to the public by the end of fiscal year 2020.