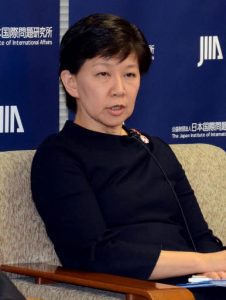 Izumi Nakamitsu, the U.N. Under-Secretary-General and High Representative for Disarmament Affairs, took the platform during a forum held in Tokyo on December 7. She stated that she had proposed that a meeting be held among ministers of the signatories of the Treaty on the Non-proliferation of Nuclear Weapons (NPT) in order to make the 2020 Review Conference of the Parties successful.

Ms. Nakamitsu said that it was necessary to have new wisdom to produce an impression that the conference was successful while there were challenges that include tensions between the United States and Russia. She added that she was calling on the treaty’s signatories to hold a ministerial meeting at the beginning of the review conference and issue a ministerial declaration that firmly maintaining the NPT regime would be crucial to its members’ security.

Ms. Nakamitsu first communicated her idea unofficially in October during the First Committee of the United Nations, which deals with disarmament issues. Some countries have expressed their approval for her idea, according to her.

The last NPT Review Conference, held in 2015, broke down and closed without adopting a final document because of divided opinions concerning such issues as the approach to nuclear abolition and the establishment of a nuclear-weapon-free zone in the Middle East. Ms. Nakamitsu said that the 2020 Review Conference must not fail. “To make it a success, signatories must send out a political message that they will be committed to nuclear disarmament as well as nuclear non-proliferation,” she said.

Some 100 people attended this forum organized by the Japan Institute of International Affairs, a Tokyo-based think tank.