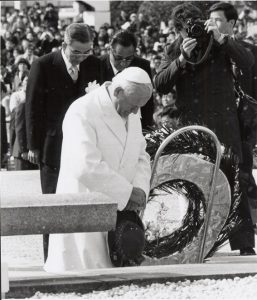 On December 18, one day after Pope Francis’s desire to visit Japan around the end of next year, including a visit to the two A-bombed cities of Hiroshima and Nagasaki, was conveyed, A-bomb survivors in Hiroshima welcomed the announcement. They hope that the Pope’s visit will help advance a world without nuclear weapons.

Toshiko Tanaka, 80, a cloisonné enamel artist living in Higashi Ward, Hiroshima, said firmly, “This will be a good opportunity for us to strengthen the momentum toward the abolition of nuclear weapons. I hope that the local government and the citizens of Hiroshima will work together to make the most of his visit.” Ms. Tanaka is an A-bomb survivor and has been active in sharing her A-bomb account both in and out of Japan.

Assuming the visit by Pope Francis comes to fruition, it will be the first visit by a Pope since the late Pope John Paul II came to Hiroshima in February of 1981. At that time, the City of Hiroshima gave a piece of her cloisonné enamel art to the Pope as a commemorative gift. During Pope John Paul’s visit, Ms. Tanaka listened directly to his “Appeal for Peace at Hiroshima” at the Peace Memorial Park, in which he called for the abolition of nuclear weapons, and she had the chance to meet the Pope in person, too.

According to information from that time provided by the Hiroshima prefectural police department, about 25,000 people flocked to the park to see the Pope. Ms. Tanaka said, “Whether or not we were Catholics, many citizens of Hiroshima were so impressed by the Pope’s appeal.” She hopes that a second visit to her city by a Pope will become a reality and enlarge the circle of people who desire the elimination of nuclear arms.

Since he became Pope in 2013, Pope Francis has repeatedly called for nuclear abolition. The Vatican has ratified the Treaty on the Prohibition of Nuclear Weapons, which was adopted at the United Nations last year. Kunihiko Sakuma, 74, the chair of the Hiroshima Prefectural Confederation of A- and H-Bomb Sufferers Organizations (Hiroshima Prefectural Hidankyo), shared his hopes for the visit by saying, “I hope he will call on the Japanese government and other nations to ratify the treaty when he is in Hiroshima.”

Tomoyuki Mimaki, 76, the vice chairman of the other Hiroshima Prefectural Hidankyo, chaired by Sunao Tsuboi, was focused on the timing of his potential visit, at the end of 2019, which is prior to the Review Conference of the Nuclear Non-Proliferation Treaty (NPT), scheduled to take place in the spring of 2020. The NPT Review Conference is held every five years as a venue for the nations of the world to discuss nuclear disarmament measures. Mr. Mimaki said, “Looking ahead to the milestone year of 2020, I hope Pope Francis will make an appeal that conveys the horror of nuclear weapons and calls for the abolition of nuclear weapons to people all over the world.”

With more than a billion Catholics in the world, their global influence moved both Hiroshima Mayor Kazumi Matsui, in November 2017, and Hiroshima Governor Hidehiko Yuzaki, in May of the same year, to visit the Vatican and request that the Pope visit the A-bombed city of Hiroshima. Mr. Matsui held a press conference on November 18 and stated that the Pope’s message from Hiroshima would have a powerful impact. He added that he hopes the Pope will take in the wish of the people of Hiroshima for nuclear abolition and peace, and communicate this to the world, along with his own impressions of the A-bombed city.

Mr. Yuzaki also welcomed the Pope’s comment about paying a visit to Hiroshima. At the press conference, he said, “Amid the difficult recent circumstances of nuclear disarmament, the Pope’s visit will be a large driving force for strengthening international momentum to abolish nuclear weapons.” The governor expressed his intention to begin making preparations to welcome Pope Francis to Japan through collaboration with the city and the prefectural police department.

Editorial: Hope for advancing nuclear abolition in visit by Pope to A-bombed cities