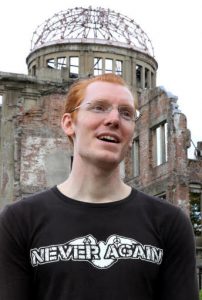 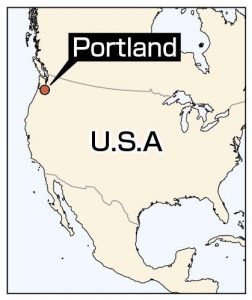 Peter Chordas, 35, a resident of Minami Ward, Hiroshima, serves as a volunteer for the citizens’ group called the Hiroshima Interpreters for Peace (HIP). He holds workshops for the members of the group and Hiroshima citizens each weekend to help them explain the monuments in and around the Peace Memorial Park in English to international visitors. His workshops to date have focused on explaining the Cenotaph for the A-bomb Victims and the Monument Dedicated to the Poet Sankichi Toge. He spoke passionately, “Hiroshima serves as a gateway into peace issues and anti-war issues.” He thinks that anyone can find ways to contribute.

Peter Chordas’s grandfather on his mother’s side, Mikhail Chordas, was originally from Latvia and miraculously managed to survive his captivity at a Nazi concentration camp. Mikhail Chordas died in 2009 at the age of 85. During the workshop he held in April, Peter talked about his grandfather’s experience of the war for the first time.

Peter’s grandfather studied composition at a music school in Riga, the capital of the Baltic state of Latvia. In 1944, when he was 21, he traveled to Germany and was captured there by the Gestapo, the Nazi secret police, and taken to a concentration camp near Dresden. Someone apparently reported him to the Nazis, saying that he had been listening to BBC radio.

It is said that there were around 20,000 Nazi concentration camps in addition to the Auschwitz concentration camp in Poland, and not only Jewish people were held at these sites. Peter says that his grandfather was abruptly stripped naked, paraded through a medical inspection, and his teeth were pulled out to obtain the gold fillings. He added that his grandfather was not properly fed and was forced to undergo medical experiments in which he was infected with unidentified viruses.

Peter Chordas was born in Santa Monica, a city near Los Angeles. He moved about the country with his mother, who was a college professor, living mainly on the West Coast. His mother was an ardent antiwar activist and instilled in her son’s mind, from an early age, that “nuclear weapons are evil.” When Peter was a high school student, he formed an antiwar group. He also took part in demonstrations in 2003 to protest the U.S. war in Iraq.

As a student at the University of Portland, he met a woman from Hiroshima, who later became his girlfriend. They moved to Japan at the end of 2015. On August 6, 2016, the anniversary of the atomic bombing of Hiroshima, he happened to attend a meeting organized by HIP, in which A-bomb survivors were sharing their A-bomb experiences in English. Since that time, to deepen his understanding, he has actively been reading books and literature related to the atomic bombing of Hiroshima and the subsequent reconstruction of the city.

As a freelance writer, Peter contributes articles to The Japan Times, an English language newspaper, and a tourism website. He often has the chance to listen to A-bomb experiences from survivors, including Keiko Ogura, 81, the head of HIP. He says that Auschwitz and Hiroshima are both emblematic of the consequences of war, and that such suffering is occurring on the world’s battlefields today. He argues that every bullet fired should be considered a crime against humanity, and that therefore we should remember the war experiences of the past, learn from them, and share them with others.