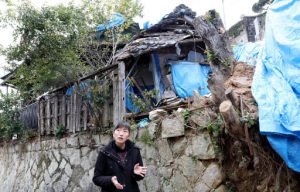 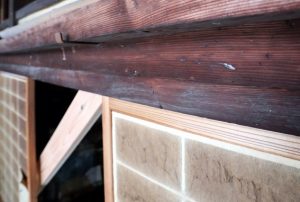 An A-bombed home in Koinaka, Nishi Ward is facing the danger of demolition as a result of July’s torrential rain and landslides that hit western Japan. The residence is located 2.5 kilometers from the hypocenter, and still retains embedded bits of broken glass that were hurled through the air in the A-bomb blast. The house was also mentioned in Hiroshima, the well-known reportage written by the American journalist John Hersey. After the war ended, the house was repaired and kept in continuous use. However, following a landslide that occurred at the slope behind the house, the government has judged the structure to be in a state of utter disrepair. The owner of the home will now spend the new year wondering if there is any way to save it.

The great-grandfather of Miho Ikeda, 58, the current owner, originally built the one-story house, about 90 square meters in size, during the Taisho Era. The A-bomb blast ripped the tiles off the roof and damaged its pillars.

At the time of the bombing, the late Toshiko Sasaki was living in the house. Ms. Sasaki suffered severe injuries to her left leg, while her parents and her younger brother lost their lives as a result of the A-bomb attack. Ms. Sasaki was one of the survivors featured in Mr. Hersey’s Hiroshima, which conveyed the horrific conditions of the atomic bombing to the rest of the world in 1946. In his report, Mr. Hersey described how Ms. Sasaki looked out at the ruins of the city from her house on the hillside after she was discharged from the hospital.

The bits of glass that remain embedded in the corridor facing the direction of the hypocenter were intentionally left where they are. After the war ended, Ms. Sasaki became a nun and lived in a convent in different parts of Japan, including Kyushu. In recent years, Ms. Ikeda’s father, who was Ms. Sasaki’s cousin and also an A-bomb survivor, lived in the house. He then passed away in February 2018 and his daughter, who serves as a Peace Volunteer at the Peace Memorial Museum, inherited the house. Shortly after, the house was hit by those heavy rains.

The house is one of five homes in the Koi area that were badly damaged in this natural disaster. As mud and rocks slammed into the house, it became tilted to one side. Following reinforcement work that was done, to eliminate the dangers, an investigation is now being undertaken to determine if the house is still livable after further repairs are performed. As for restoring the slope, this task will be left undone until 2019 because the necessary workers are not yet available.

In Hiroshima, 111 homes have been assessed as thoroughly damaged due to last July’s torrential rain. In addition to support from donations, these houses can be demolished at the expense of public funds. By the end of January, the City of Hiroshima will confirm the intent of the affected households. Thus, Ms. Ikeda, too, will be forced to make a decision about her home, despite the hope she holds to find a way to maintain the A-bombed structure so it can continue to convey the tragedy of the atomic bombing.

Hiroshima
Reportage written by John Hersey (1914-1993), a Pulitzer Prize-winning writer. Mr. Hersey wrote this account after visiting Hiroshima in 1946. Based on the detailed interviews he conducted with six A-bomb survivors, including the late Kiyoshi Tanimoto, a pastor, it was published in The New Yorker, a U.S. magazine, and created a sensation around the world with its description of the actual conditions in the A-bombed city.