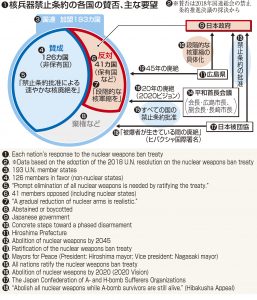 The year 2020, looming on the horizon, is the year that Mayors for Peace, for which Hiroshima Mayor Kazumi Matsui serves as president, has set as a goal for eliminating nuclear weapons from the world. Although the Treaty on the Prohibition of Nuclear Weapons, one of the pillars of the group’s 2020 Vision, was adopted at the United Nations in 2017, the nuclear weapon states remain opposed to it and reductions in nuclear arms have slowed considerably. Amid these circumstances, Hiroshima Prefecture has indicated that will urge the United Nations to set a goal for achieving a nuclear-free world by the year 2045.

Meanwhile, A-bomb survivors are calling on the prefecture and the City of Hiroshima to press the Japanese government to ratify the nuclear weapons ban treaty so that nuclear arms can be abolished as soon as possible. How can the voices of those in the A-bombed cities reach the people of the world? 2019 will be a crucial turning point.

In 2003, Mayors for Peace drew up guidelines called the “2020 Vision,” in which 2020 was set as the target year for nuclear abolition. This vision created a course to achieve this goal over the next 17 years by preventing nuclear proliferation and speeding the process of nuclear arms reductions through the establishment of a nuclear weapons ban treaty. The target year was set based on the A-bomb survivors’ long-held desire to “eliminate all nuclear weapons while they are still alive.” In line with these guidelines, Mayors for Peace has collected more than 2.8 million signatures requesting that all nations conclude the Treaty on the Prohibition of Nuclear Weapons and has submitted them to the United Nations.

In 2017, three years away from the target year, the Treaty on the Prohibition of Nuclear Weapons was adopted at the United Nations with the support of 122 non-nuclear nations and regions. Mayors for Peace called on the U.N. members to adopt the treaty by working with the International Campaign to Abolish Nuclear Weapon (ICAN), a non-governmental organization that received the Nobel Peace Prize later in 2017.

However, the latest estimate indicates that there are about 14,500 nuclear weapons in the world as of January 2018. That number has decreased by half compared to the time Mayors for Peace compiled its vision in 2003, when there were about 30,000 weapons. In recent years, however, the pace of reductions has slowed to only several hundred a year. Now that the United States has expressed its intention to withdraw from the Intermediate-Range Nuclear Forces (INF) Treaty, people fear that a nuclear arms race may break out again.

Setsuko Thurlow, 87, the face of ICAN and an A-bomb survivor who now lives in Canada, met with Hiroshima Mayor Kazumi Matsui while visiting her hometown of Hiroshima last November. She pressed the mayor to strongly urge the Japanese government to ratify the nuclear weapons ban treaty. Unlike the Peace Declaration made by Nagasaki Mayor Tomihisa Taue, who is also the vice president of Mayors for Peace, Mr. Matsui did not include a clear statement in his Peace Declaration of last August that called on the Japanese government to join the Treaty on the Prohibition of Nuclear Weapons.

When asked about this by Ms. Thurlow, Mr. Matsui replied by saying, “The City of Hiroshima needn’t be antsy and act alone. The members of Mayors for Peace are all taking action together.” He added that the organization has submitted a letter of request to the government. To date, more than 7,000 local governments around the world have joined Mayors for Peace. In Japan, nearly 100 percent of the municipalities are members. And yet they don’t have enough power to sway the stance of the central government, which has turned its back on the treaty.

The Japan Confederation of A- and H-bomb Sufferers Organizations (Nihon Hidankyo), two Hiroshima Prefectural Confederation of A- and H-bomb Sufferers Organizations (Hiroshima Hidankyo) and other organizations of A-bomb survivors have been promoting the Hibakusha Appeal campaign, calling on all countries to undertake early ratification of the nuclear weapons ban treaty. The average age of the survivors, which was 71 in 2003, is now over 82. The A-bomb survivors are putting forth their final effort to collect several hundred million signatures by 2020.

Hiroshima Prefecture sets abolition goal for 2045, focusing on phased disarmament
Compared to Mayors for Peace, Hiroshima Prefecture seems to be keeping the nuclear weapons ban treaty at arm’s length. The treaty was adopted by non-nuclear nations with the idea of having it permeate through the global community as an international norm and getting people involved in the process of putting pressure on the nuclear powers to join the agreement. Because it was established without the consent of the nuclear powers, Hiroshima Governor Hidehiko Yuzaki views this approach as “naïve” and believes that it will cause the nuclear weapon states to distance themselves further from such a treaty.

The main focus of the discussion at the Hiroshima Round Table, Hiroshima Prefecture’s advisory committee of experts in which Mr. Yuzaki himself is a member, is to craft concrete steps for a gradual reduction of nuclear arms, the approach favored by the nuclear weapon states and the Japanese government. In 2018, the prefecture revealed its plan to appeal to the United Nations to set a goal for realizing a world without nuclear weapons by 2045, but the nuclear weapons ban treaty has not been included in its proposed agenda.

The A-bomb survivors, who want to abolish nuclear weapons as early as possible by having the treaty ratified, say that setting a new goal for 2045 is incompatible with their appeal. They are also concerned that it may be used as an excuse to rebuff their desire.

Last December, Kunihiko Sakuma, 74, the chair of Hiroshima Hidankyo, met with prefecture officials and stressed, “This new goal will not be accepted by people around the world who support the treaty.” Toshiyuki Mimaki, 76, the vice chair of the other Hiroshima Hidankyo (chaired by Sunao Tsuboi), also made an appeal by saying, “The core of the campaign is ‘to eliminate all nuclear weapons while the A-bomb survivors are still alive.’ If not 2020, the target year should still be earlier than 2045.”

This year, several major events that will lend support to the A-bomb survivors’ appeal are expected to take place. The Treaty on the Prohibition of Nuclear Weapons is likely to enter into force in the second half of 2019 with the necessary ratifications of 50 nations. And the chance of Pope Francis visiting the A-bombed cities is high. Vatican City has already ratified the nuclear weapons ban treaty. The pope has also rejected the need for nuclear deterrence, which the nuclear weapon states and the Japanese government insist is needed for security and have used this as justification for opposing the treaty.

Hiroshima Prefecture, along with the City of Hiroshima, has asked the Pope to visit the A-bombed city. The prefecture has also sent out messages that convey the dangers of the policy of nuclear deterrence and propose the alternative of maintaining security through conventional arms. If they could now provide a clear picture of a productive relationship between Mayors for Peace and the A-bomb survivors’ organizations, this would add further impetus to the efforts to promote the nuclear weapons ban treaty. The Review Conference of the Nuclear Non-Proliferation Treaty (NPT) takes place every five years, with the next meeting scheduled for the spring of 2020. The prefecture and the city are asked to strengthen their cooperation with one other to respond to the voices of the A-bomb survivors and citizens.

SDGs for Hiroshima Prefecture’s Future City Plan
SDGs are the Sustainable Development Goals adopted by the United Nations in 2015 with the aim of achieving these goals by 2030. Among the SDGs are the eradication of poverty and hunger. Hiroshima Prefecture plans to urge the United Nations to incorporate the goal of realizing a world without nuclear weapons into its next goals. Since the prefecture believes that the next goals will be planned for achievement by 2045, it will work on the U.N. to make these goals mark the 100th anniversary of the atomic bombings, as a major milestone for Hiroshima and Nagasaki. In 2020, the prefecture will unveil its ideas and a roadmap for their realization.