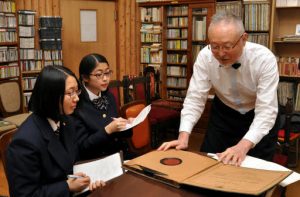 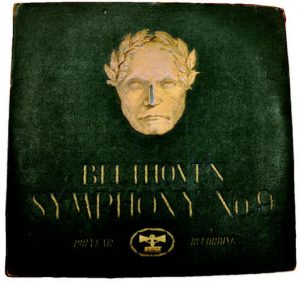 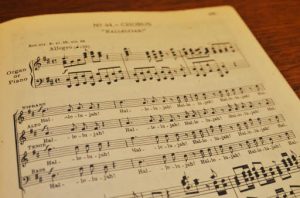 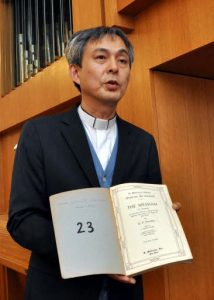 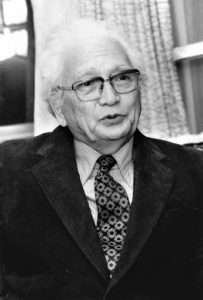 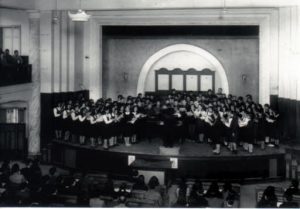 This year is coming to a close. In December, there are many performances of music and choral groups in the city, and this evokes the feeling that the end of the year is upon us.

Music could also be heard on the streets of Hiroshima after the city was decimated by the atomic bomb. The “legend” of Beethoven’s Ninth Symphony has been handed down at a coffee shop called Café Musica. A record of this piece was played by the owner, and the music gave heart to the people of the city in their efforts to rise again from the devastation of the atomic bombing.

The Messiah was sung at the Hiroshima Nagarekawa Church by citizens who practiced and sang in chorus amid the ruins, using a score sent from the United States after World War II. This piece has been sung at the church at Christmas time ever since. The fact that men and women were able to come together and sing freely at the church was a sign of the city’s revival.

For this article, the junior writers of the Chugoku Shimbun gathered information about music and Hiroshima, and in particular, how music played an important role in fueling people’s hopes for the future.

On New Year's Eve 1946, a piece of music was played at Café Musica, which was located in Enkobashi-cho near Hiroshima Station. The piece was Beethoven’s Ninth Symphony. We asked Tadataka Yanagawa, 75, the current owner of the café, about the story that has been handed down, in which this music helped encourage the people of Hiroshima as they labored to reconstruct the city in the aftermath of the atomic bombing.

The café had just been opened by Mr. Yanagawa’s father, Yoshio Yanagawa, in August 1946. With the belief that listening to music could give people the strength to go on, his father bought a gramophone and records, and played them at his café. The Ninth Symphony was the third record that he obtained. In December, when he heard that records of this piece were being sold on the black market in the Kansai Region, he went there to get one.

The master disc was a precious recording that was made in Germany in 1925. When Yoshio played the record on New Year’s Eve, with the strong hope that this piece could help empower the people listening to it, the customers in the café became quietly absorbed in the music. Outside, a man in a military uniform stood at the window, listening intently. Snow was falling on him, which made it look like he was shedding tears. This story has been handed down as the “legend” of Beethoven’s Ninth Symphony.

The café subsequently relocated two times, moving to its current site in Minami Ward, with the support of its regular customers, in 2000. A performance hall was constructed, and the café was restored to its original state. In 2002, a book titled Ode to Joy was also created by a group of citizens who wanted to help convey this legend to others.

Mr. Yanagawa believes that the music enabled people to reflect on their lives and gain the strength to go on. He is a person whose life is intertwined with music. When he sees the smiles on the faces of his customers after attending a concert in his café, this encourages him to carry on with his work for another day.

We had the chance to listen to the record of the Ninth Symphony that was played at the time. Compared to the digital music of today, the sound was wonderfully nostalgic and captivating. We felt the power of this piece and recognized that music played an important role in helping the people of Hiroshima rebound from the terrible conditions of the atomic bombing. (Yukiho Saito, 16, and Yuri Furohashi, 14)

At a Christmas service in December 1947, people sang the Messiah at the Hiroshima Nagarekawa Church with the hope for peace in the world. The church, located at Kaminagarekawa-cho, was burned to the ground in the atomic bombing.

Kiyoshi Tanimoto, a priest at the church, had a friend in the United States send him the score for the piece. This resulted in a fateful turn of events. After losing all the church’s music in the atomic bombing, he received a letter from Lillian Condit, a friend who was a music teacher in Chicago. Ms. Condit had read about Reverend Tanimoto in the reportage Hiroshima, which told the American public about the devastation of the bombing, and was worried about him. She asked if there was something she could do for him.

Reverend Tanimoto talked to a musician he knew then asked Ms. Condit to send him the score for the Messiah. Thirty copies were sent from the United States, and Reverend Tanimoto reached out to churches in the city for participants and put together a mixed choir. The Messiah is a piece that conveys the life of Jesus Christ. The choir practiced the piece for two months then sang it at the Christmas service held at the end of the year. News of the performance appeared in a newspaper article with the headline “Chorus sings out hallelujah.”

Koko Kondo, 74, Reverend Tanimoto’s eldest daughter and a resident of Miki City, Hyogo Prefecture, has been familiar with the Messiah since she was a child. Looking back on those days, she said that the score was a wonderful gift. As she grew up, she came to realize Ms. Condit’s strong desire for the people of Hiroshima to have hope for the future. She said that both the singers and listeners of the piece were heartened by the music.

The Hiroshima Nagarekawa Church, located in Naka Ward, has continued to share the story about the Messiah. Mareo Mukai, 58, a priest at the church, said, “Singing the Messiah in the A-bombed city of Hiroshima became a pledge to realize peace. I want us to go on valuing this history and create a more peaceful world.”

We felt the resolve of the people of Hiroshima, with their belief in the power of music, that the tragedy that befell this city must never be repeated. (Kana Okino, 18, and Yuno Nakashima, 12)

Checking newspapers and documents from 1945 to 1948

I checked newspapers and documents from back then and found that concerts were held not long after the war ended in 1945.

On November 13, three months after the war ended, the Chugoku Shimbun published this in a five-line article: “Reconstruction starts with music: Popular song show and new singers’ contest to be held in the morning and afternoon on November 18 on the 4th floor of the Chugoku Haiden Building in Komachi, Hiroshima.” Chugoku Haiden is now the Chugoku Electric Power Company. I found many articles about food shortages, but there were also small articles, like this one, which conveyed how Hiroshima citizens began to enjoy music.

Chieko Seki, 86, an A-bomb survivor and a journalist based in Tokyo, said that a piano recital was held in the Ujina Arc de Museum, a facility to honor soldiers, at around the same time.

In 1946, high school students and first-year university students of that time created the Hiroshima student music association. About 100 students sang in chorus at schools in rural districts and raised funds for the reconstruction efforts. This is akin to charity concerts today.

Yumi Notohara, 47, a resident of Kyoto who researches the musical history of Hiroshima, said that performing the music they enjoyed provided the suffering survivors with greater energy and a stronger spirit. (Anna Ikeda, 17)

1945
Popular song contests are held one after another.
A piano concert is held at the Ujina Arc de Museum.

1947
The “Hiroshima Peace Song” is composed.
The Messiah is sung in chorus at the Hiroshima Nagarekawa Church.

What is Peace Seeds?
Peace Seeds are the seeds of smiles which can be spread around the world by thinking about peace and the preciousness of life from various viewpoints. To fill this world with flowering smiles, 21 junior writers—junior high school and senior high school students—choose themes, gather information, and write articles.