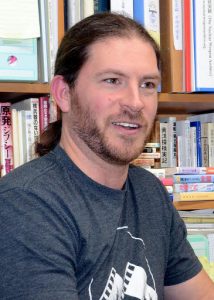 On March 1, 1954, the United States carried out a hydrogen bomb test in the Pacific Ocean. As a result, 23 crew members of a Japanese tuna fishing boat called the Daigo Fukuryu Maru (The Lucky Dragon No. 5), based in Shizuoka Prefecture, were exposed to radioactive fallout released by the blast. In an interview with three of the former crew members in the winter of 2014, they said that they had lived lives of deep anxiety, worrying that they might one day fall fatally ill from their exposure. Keith Reimink, 40, who elicited these sincere words from the crew members, spent four years creating a documentary titled “Day of the Western Sunrise.”

Prior to this film, no full-length documentary on the Daigo Fukuryu Maru incident had been made by an American film director. Mr. Reimink acknowledged that, because he is a citizen of the nation which caused this pain and suffering to the crew members, he had felt very nervous conducting the interview with them. But he added that, unless we face up to the tragedies of our past, we will likely make the same mistakes again.

Mr. Reimink studied filmmaking at New York University. He graduated in 2002 then, to avoid the threatening conditions in New York, where he had felt uneasy after the terrorist attacks of September 11, he traveled to Alaska. He later became a cook and landed a job at the canteen of a U.S. base in Antarctica. This was an inspiring time and he began shooting film of daily life there, completing his first documentary in 2012. The following year, he established a film company in the city of Pittsburgh, in the eastern U.S. state of Pennsylvania, where he resides.

He first learned about the events involving the Daigo Fukuryu Maru in a book he read in the spring of 2014. He said that he wanted to shed light on the tragic consequences of nuclear weapons, information not directly related to Hiroshima or Nagasaki and about which many Americans aren’t really familiar, so that more people will carefully weigh their decisions when they vote in elections. He incorporated animated segments within the footage of the crew members’ testimonies, depicting the very moment of the hydrogen bomb explosion; the death of Aikichi Kuboyama, who was 40 years old at the time and the boat’s chief radio operator; and the suffering experienced by the crew members, who were subjected to discrimination from others as a result of their exposure to the bomb.

On February 25, when Mr. Reimink arrived in Japan for the first screening of his film in Japan, Susumu Misaki, a former steersman of the Daigo Fukuryu Maru and one of the crew members whom Mr. Reimink interviewed, died at the age of 92 at a hospital in Shizuoka. Thus, Mr. Misaki’s words in the film have become his last words. Mr. Reimink hopes that his film can at least help convey Mr. Misaki’s voice to as many people as possible. He said he has asked the committees of the film festivals in Hiroshima to show his film at their events.

He came to Japan with his wife, a strong supporter of his work, and his brother, who was in charge of the music for the film. They will attend a screening event in Tokyo on March 2.