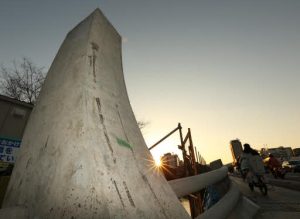 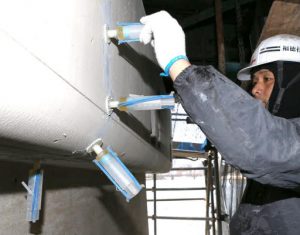 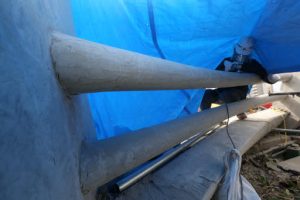 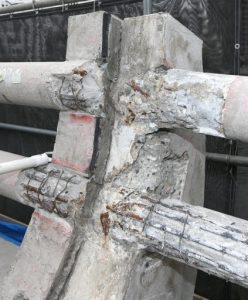 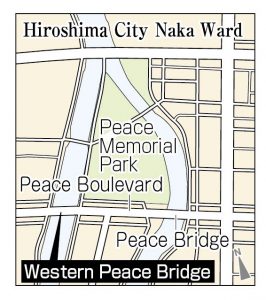 Repair work on the railings of the western Peace Bridge on Peace Boulevard is now underway. During the work, which began in February, the surface of the railings will be “restored” to the appearance of smooth concrete similar to what they looked like when the bridge was completed in 1952. The bridge is located 400 meters to the west of the Peace Bridge, and both were designed by the late Isamu Noguchi, a world-famous sculptor. The railings of the Peace Bridge have already been “restored” to their original appearance.

In 1983, the surface of the railings was sprayed for protection, paint that looked like fieldstones. When workers scraped the paint off, they found some cracks and saw that some of the concrete had peeled away. Workers used syringes to inject resin into the cracks and scraped off some concrete to remove rust from the inside of the railings.

The surface of the railings will be painted to look like exposed concrete by the end of April so that the refurbished bridge will make its debut in time for the Hiroshima Flower Festival to be held in May. Toshiya Miki, the general manager of the Construction Division of the Naka Ward Office, said, “I’m impressed with the originality of making a warped shape with concrete and the techniques used in those days. We will carry out the repair work carefully, so please look forward to the completion of this project.”