Readers Speak: Is it disrespectful to make a peace sign in front of the A-bomb Dome? 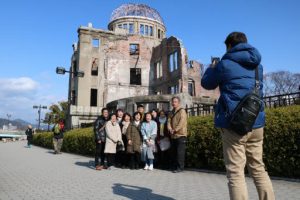 We received a message from a 76-year-old man who lives in Nishi Ward, Hiroshima and strolls around the Peace Memorial Park every day. He wrote, “I see some tourists flashing peace signs when they take pictures in front of the A-bomb Dome and I think this is really inconsiderate.” The peace sign has various meanings, depending on the context: it can convey a yearning for peace; an expression of fun; or a “V for Victory” sign. Should people refrain from making a peace sign in front of the A-bomb Dome?

As we observed people by the A-bomb Dome, it became evident that Japanese tourists, especially younger people, often make a peace sign when they pose for a picture. We asked 50 people around the A-bomb Dome whether they feel uncomfortable if they see people making peace signs at that site. Those responding to this survey included both men and women as well as both residents of Hiroshima and visitors to the city. Thirty-five people, or 70 percent of the total, answered “yes,” 12 said “no,” and three responded “no opinion.”

Many of those who answered “yes” said that making the peace sign is inappropriate because people make this sign when they’re having lighthearted fun. Yuriko Ubukata, 84, visited the Peace Memorial Park from the city of Maebashi to comfort the souls of the A-bomb victims. She said with a frown, “When I think of those who died a painful death here, seeing people flash a peace sign is unbearable to me. It’s not an appropriate thing to do.”

A “tourist spot” in Hiroshima

On the other hand, many of those who responded “no” said that they automatically make a peace sign when a camera is pointed their way. A 32-year-old female company employee from Kanagawa Prefecture said, “The A-bomb Dome is a ‘tourist spot’ in Hiroshima so I posed in front of it as I always do, without thinking.”

More than half of those surveyed, regardless of their response, said that they had never thought about this issue until they were asked. One of them is a 22-year-old college student from Kyoto, who made a peace sign as he posed for a photo. He and his friend looked at one another with a start when asked about making the peace sign. He then replied, “Now that you mention it, it might be a disrespectful thing to do.”

What do A-bomb survivors think about the peace sign? We asked Masaaki Tanabe, 81, a filmmaker who lives in Naka Ward. The house where he was born was located by the east side of the A-bomb Dome. He feels that this behavior is unfortunate, saying, “People who make a peace sign may not be able to imagine that this area was once a neighborhood with people who were living lives before the bombing.”

If there was a signboard at the site, encouraging people to “behave appropriately” around the A-bomb Dome, perhaps fewer people would make a peace sign. However, Seiji Horie, 46, the director of the non-profit organization Korekarano Manabi Network, which is based in Naka Ward and has developed a peace studies program, is skeptical about such measures, saying, “Forcing people not to make a peace sign wouldn’t help them think more deeply about the atomic bombing.”

Mr. Horie knows from his experience of many students, who meekly listen to the account of an A-bomb survivor with their heads down because they were told to do so, that they don’t necessarily understand the survivor’s story very deeply. He said, “The important thing is to get the students to think for themselves. Get young people to realize that ‘war isn't a story of old people,’ and give them the opportunity to think about the meaning of peace today. I think this is the role that Hiroshima should play.”

This year marks the 74th anniversary of the atomic bombing of Hiroshima. With the survivors growing old, we must consider ways to hand down the historical facts to the generations that follow, and the significance of having people visit the A-bomb Dome. The peace sign flashed by tourists, without awareness, might offer a clue toward coming up with an effective approach.

While we were conducting this survey, something unexpected happened. The student from Kyoto came back 30 minutes later and told us that he now regretted making a peace sign. After taking the photo, he had read some explanation about the A-bomb Dome, and began to mull the matter himself. He went on to say, “When I return to Kyoto, I’ll study more about the atomic bombing.”