Upcoming elections: What characteristics should the mayor of Hiroshima have? 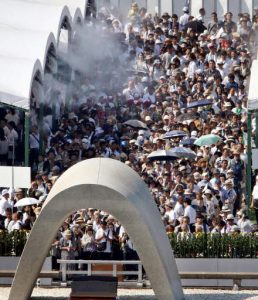 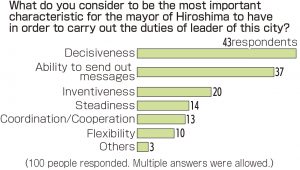 During the annual Peace Memorial Ceremony held on August 6, 2018, Hiroshima Mayor Kazumi Matsui said that world leaders “must strive to make the Treaty on the Prohibition of Nuclear Weapons a milestone along the path to a nuclear-weapon-free world,” denouncing the concept of nuclear deterrence and emphasizing the role of the treaty that was adopted at the United Nations the previous year.

Standing in front of the Cenotaph for the A-bomb Victims, Mr. Matsui and his predecessors have read out their Peace Declarations to convey their messages to A-bomb survivors, citizens, representatives from other nations, and other attendees. Each declaration has reflected the challenges of the times and the character of the mayor currently in office. Last year’s declaration, which was the last one given by Mr. Matsui in his second term, drew criticism because he did not make a straightforward request of the Japanese government to ratify the nuclear weapons ban treaty, which the central government opposes.

Satoru Ubuki, 72, a former professor at Hiroshima Jogakuin University and an expert on administrative efforts to advance peace, said, “The mayor of Hiroshima is expected to hold a different outlook on the world from the Foreign Ministry. It must be unique to the A-bombed city. As the mayor’s statements and actions are influential, that person’s philosophy is important.”

The Chugoku Shimbun asked 100 residents of Hiroshima what they consider to be the most important characteristic for the leader of this city to have. The largest number of people, 43, chose “decisiveness,” followed by “the ability to send out messages,” which was selected by 37 others.

Appealing to the world

Eriko Sogawa, 47, a company employee from Minami Ward, said she responded to the question with efforts to advance peace in mind. “I want the mayor of Hiroshima to clearly communicate the horrific nature of nuclear weapons to the world and urge the governments of Japan and other nations to ratify the nuclear weapons ban treaty,” she said. Akira Kato, 78, a resident of Higashi Ward, said, “As the mayor of Hiroshima must convey the consequences of the atomic bombing, the ability to send out messages is absolutely necessary.” These critical comments linked to last year’s declaration reflect the high expectations of Hiroshima residents for the leader of the A-bombed city.

The current administration could be considered a “coordinator” in its approach, taking time to gather various opinions and bringing them together. One example of this involves the conservation and utilization of a building that survived the atomic bombing. In June 2016, experts began discussing what to do with the former Hiroshima University Science Faculty No. 1 Building, located at the old Hiroshima University site, but it took until November 2018 for a concrete plan to be put forward, which envisions gathering together research laboratories from Hiroshima University and Hiroshima City University at that location.

Hiroshi Harada, 79, is a former director of the Hiroshima Peace Memorial Museum and one of those who was involved in the efforts to have the Atomic Bomb Dome registered as a World Heritage site. He said that the mayor of Hiroshma must listen to different opinions because the municipal government “must work alongside citizens in its efforts to advance peace.” At the same time, he feels that there are now more situations in which the mayor must have the ability to demonstrate leadership in projects that involve various departments and organizations. “The mayor of Hiroshima is responsible for unique efforts to promote peace, so this person must be able to listen to people’s voices while continuing to take steps and move these efforts forward,” Mr. Harada said.

In the survey, 14 respondents placed importance on “steadiness,” while 13 chose “coordination/cooperation.” A 29-year-old hairdresser from Nishi Ward chose “steadiness.” He said that a leader must carry out his or her campaign pledges. “I want the mayor of Hiroshima to steadily implement policies,” he said. Others focused on the “profitability” of policy measures and identifying necessary “investments.”

Regarding “coordination/cooperation,” a 39-year-old homemaker from Saeki Ward said, “The Hiroshima mayor stands out only when delivering the Peace Declaration.” But she hopes that the mayor will “listen to a variety of views when making a decision.” As the expectations of citizens vary, we have to think about what type of leader this city of 1.19 million people needs. We are now awaiting the discussions regarding the policies of the candidates for the mayoral election.