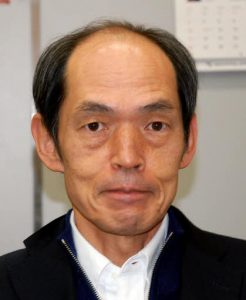 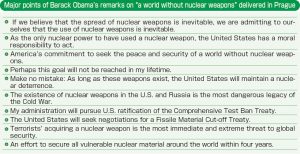 Hiroshima hopes to reawaken interest in nuclear weapons, make the most of nuclear ban treaty

Nearly 10 years have passed since the moment when Barack Obama, who was then president of the United States, mentioned the goal of “a world without nuclear weapons” in a speech he made in Prague, the Czech Republic. His words stirred the people of Hiroshima, but it does not seem that the United States has sought to live up to these words and advance toward this goal. The United States, which attacked the cities of Hiroshima and Nagasaki with the atomic bombs, remains a nuclear superpower and a dominating presence in the world. What have Mr. Obama’s words, as the U.S. leader, meant to the people of Hiroshima?

Toshiko Tanaka, 80, an A-bomb survivor who lives in Higashi Ward, said, “That was when I began to take a new step forward, as an A-bomb survivor, with the determination to keep talking about my heartbreaking experience. I felt encouraged by his words.”

Mr. Obama spoke in front of 20,000 people from the heart of Prague, the Czech Republic on April 5, 2009. In his 30-minute speech, he conveyed his vision for a nuclear-free world with the key phrase “Yes, we can.” Many Americans take pride in forcing Japan’s surrender in World War II through the use of the atomic bombs and believe that nuclear deterrence is needed for the nation’s security. So the speech delivered by the U.S. leader was welcomed by the people of Hiroshima. Tadatoshi Akiba, then the mayor of Hiroshima, coined the term “Obamajority,” with which he described the wish of the majority of the world’s people for “a world without nuclear weapons.” An “Obamajority” folk dance song was even composed. People began calling for Mr. Obama to be invited to visit Hiroshima.

Ms. Tanaka still appreciates Mr. Obama’s achievements. At the same time, she said, “It isn’t the case that people around the world will be able to deepen their understanding of the harm that nuclear weapons can cause with one speech made by a president. A-bomb survivors should stay persistent in speaking out about their experiences.” Ms. Tanaka remodeled her house three years ago so that people from around the world can visit her at her home and listen to her account. To date, 3,500 people have visited her.

Two years have now passed since Mr. Obama concluded his time as president. “Isn’t he interested in nuclear issues anymore?” said Toshiyuki Mimaki, 77, the acting chair of the Hiroshima Prefectural Confederation of A-bomb Sufferers Organizations (Hiroshima Hidankyo), chaired by Sunao Tsuboi. Mr. Mimaki said, “Mr. Obama was awarded the Nobel Peace Prize after he delivered his speech in Prague, so pursuing efforts to realize a world without nuclear weapons is an important promise that he made. He can act more freely now than when he was president, so I hope he will work with us to advance this goal.”

Contrary to the idealistic vision that Mr. Obama advocated, his administration carried out subcritical nuclear tests and worked to modernize the nation’s nuclear arsenal. Some have criticized the speech he made in Prague, saying that the true intention behind the speech was to prevent the spread of nuclear weapons to other countries. Exasperated by the lack of action on the part of the nuclear powers, non-nuclear nations and civil society put their energy into promoting the establishment of the Treaty on the Prohibition of Nuclear Weapons at the United Nations.

Kunihiko Sakuma, 74, the chair of the other Hiroshima Hidankyo, said, “The difference between now and 10 years ago is that the nuclear weapons ban treaty was established after Mr. Obama stepped down. We ourselves have obtained a tool that could lead to the elimination of nuclear arms. Whoever the leader of the nuclear superpower is, we’ll just move forward with unwavering conviction.”

The Treaty on the Prohibition of Nuclear Weapons was a fervent wish of the people of Hiroshima, but the United States, including the Obama administration, has always been against the treaty. President Donald Trump followed Barack Obama and has put forth a policy of strengthening the nation’s nuclear capability. However, Tomoko Watanabe, 65, the executive director of ANT-Hiroshima, an NPO, said, “We still got a huge boost from the speech Mr. Obama made in Prague.”

Young people feel responsibility to carry on this cause

When he visited Hiroshima in May 2016, Mr. Obama spent only 10 minutes at the Peace Memorial Museum. “It seems he came to Hiroshima not to learn about the reality of the atomic bombing but to use Hiroshima to convey his message,” said Yuta Takahashi, 18, a third-year student at Eishin Junior & Senior High School in Fukuyama, located in the eastern part of Hiroshima Prefecture. He is a member of a group that has been pursuing a petition drive for the abolition of nuclear weapons. “The survivors’ idea of a path toward nuclear abolition seems to be very different from Mr. Obama’s idea of ‘a world without nuclear weapons,’” he added. Young people feel that the A-bomb survivors are passing the baton to them and that they should take on the responsibility of moving forward along this path toward nuclear abolition.

Interview with Kazumi Mizumoto, vice president of the Hiroshima Peace Institute at Hiroshima City University: Keep up hope and keep conveying our messages

How does an expert on nuclear disarmament interpret Mr. Obama’s Prague speech? The Chugoku Shimbun interviewed Kazumi Mizumoto, the vice president of the Hiroshima Peace Institute at Hiroshima City University, for his perspective on the speech 10 years ago and today.

Reading the entire speech carefully, we can see that half of it was about the ideal of a world without nuclear weapons and the other half about what he considered a realistic approach to this goal, which included the part “As long as these (nuclear) weapons exist, the United States will maintain a nuclear deterrence.” The people of Hiroshima emphasized the former, while the Japanese government and conservatives in the U.S. emphasized the latter. That was exactly what the Obama administration expected.

The same can be said about the “moral responsibility” of “the only nuclear power to have used a nuclear weapon.” It sounded like he was facing up to the nation’s past actions of carrying out the A-bomb attacks, but in this context, it can be interpreted to mean this responsibility is about what the nuclear superpower should do for nuclear non-proliferation. Also, he said that “a world without nuclear weapons” was a goal that would not be reached “in my lifetime,” thus shirking responsibility.

In his Nobel Peace Prize lecture, he defended the right to wage “just wars,” demonstrating that he is a realist. I believe that, as an individual, Mr. Obama believes in high ideals, but he was always concerned about U.S. public opinion and attached a high priority to maintaining balance in his actions. In a sense, we paid too much attention to the phrase “a world without nuclear weapons” and turned him into an idol. The fact that his predecessor, President George W. Bush, was not supportive of nuclear disarmament led to our great expectations for Mr. Obama. Many of the things he said in his speech, including the ratification of the Comprehensive Test Ban Treaty, have not been realized. When opposed by Congress, there is a limit to what the U.S. president can do. We, the people of Hiroshima, should have understood this. Visiting Hiroshima itself was no easy thing.

Still, his speech in Prague showed the importance of a leader expressing his ideals and giving people hope. As the first African-American president, he advocated diversity and harmony. This is in keeping with Hiroshima’s values when it comes to abolishing nuclear weapons.

President Donald Trump succeeded Mr. Obama, and the Trump administration has been making the world anxious with policies like withdrawing from the nuclear agreement with Iran and indicating that it intends to abrogate the Intermediate-Range Nuclear Forces (INF) Treaty. But a force that can counter these actions will definitely have an impact. In this light, the Prague speech can serve as a touchstone for Americans who still believe in this goal, providing them with a place to which they can return. In Hiroshima, we must not lose hope and we must continue to convey our messages.