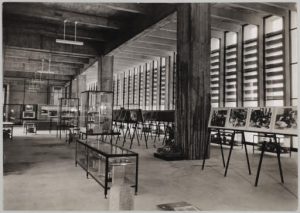 Exhibition of A-bomb tragedy returns to its origins

Here I stand in the Peace Memorial Park in Naka Ward, Hiroshima. On April 25, the Peace Memorial Museum will reopen after closing for two years to renovate the exhibition space and strengthen the earthquake resistance of the building. The City of Hiroshima opened the museum in 1955, ten years after the bombing, and since that time has conveyed to visitors the catastrophic impact of the atomic bomb on the city and its inhabitants. As of the end of this past March, the total number of visitors to the museum has reached more than 72.22 million. This series of articles will take an in-depth look at the evolution of the museum, formally known as the Hiroshima Peace Memorial Museum, in order to further reflect on Hiroshima and its past.

Today the museum holds 20,524 items which serve as “silent witnesses” of the tragedy of August 6, 1945 and continue to sound the alarm for human beings today. Initially, a man named Shogo Nagaoka (1901-1973) sought to gather A-bombed objects from the ruins. Later, Mr. Nagaoka served as the first director of the museum. When he passed away, he left a trove of documents and photographs connected to the atomic bombing, which was later found in the attic of his former home in the Kuba district of the city of Otake in Hiroshima Prefecture.

Renji Nagaoka, 77, Mr. Nagaoka’s second son and a resident of Higashi Ward, Hiroshima, donated these items to the museum in April 2015. Until that point, many aspects of the opening of the museum were unclear, but Mr. Nagaoka’s materials have shed light on these uncertainties.

Mr. Nagaoka witnessed the A-bomb’s mushroom cloud while in the town now known as Kaminoseki in Yamaguchi Prefecture. He was there with students from the Hiroshima University of Literature and Science (the forerunner of Hiroshima University) as a research assistant for the university’s department of geology. According to his personal reflections, titled “Haikyo ni tatsu” (“Standing in the Ruins”), which was published in 1950, he cried when he saw how the fossils and minerals he had collected were reduced to small, crumbled pieces at the university building located in Higashisenda-machi, Naka Ward on August 7, the day after the bombing.

In line with the promulgation of the Hiroshima Peace Memorial City Construction Law, the special legislation made by the national government, Mr. Nagaoka began displaying A-bombed roof tiles and melted artifacts that he had gathered in the A-bomb Reference Material Display Room (A-bomb Memorial Hall) in the Hiroshima Central Public Hall in Motomachi on September 25, 1949. In the previous year, he had been contracted by the City of Hiroshima to survey the damage done by the atomic bombing. On August 6, 1950, the Atomic Bomb Museum, a single-story wooden building of 132 square meters, was newly constructed next to the community hall, and he assumed the post of director, and worked as the only staff member, at the museum.

Renji Nagaoka said, “My mother ran a stationery shop, which supported our family.” After Renji entered junior high school, his father wanted him to help with his work. As one example, Renji cut off the lightning rod of the Hiroshima Fukokukan Building, which stood near the hypocenter.

Found among Mr. Nagaoka’s materials was a valuable record of the past. His collection included “HIROSHIMA,” a 46-page pamphlet that he edited in 1954, which was the year a Japanese tuna fishing boat was contaminated by nuclear fallout from a hydrogen bomb test conducted by the U.S. military at the Bikini Atoll. It also included the prospectus “Support Group for Hiroshima A-bomb Materials Collection,” which he had published. It was signed by the members of the group who were advocating this aim “to collect a variety of A-bomb-related materials,” including distinguished figures like Yosaburo Yamasaki, who donated the “A-bomb memorial archives” to the museum in 1965 and laid the foundation for sending out anti-nuclear messages from the A-bombed city.

Mari Shimomura, 47, a curator at the museum who sorted through Mr. Nagaoka’s materials, which consisted of approximately 12,000 items, said that she was deeply impressed by the fact that the citizens of Hiroshima helped Mr. Nagaoka collect and display the A-bombed items. The museum opened on August 24, 1955. In 1963, one year after Mr. Nagaoka stepped down from his position as museum director, he donated 1,500 items on display in the museum to the museum, the list of which has been kept there as a list of “permanent preservation.”

The city then announced a decision to update the exhibition space by adding wax figures that would reproduce the appearance of A-bomb survivors in the aftermath of the atomic bombing. Mr. Nagaoka, however, was opposed to this idea and said, “People all over the world come here to see the actual A-bomb items in person, rather than looking at their imitations.” Yet the figures were finally placed in the museum in 1973, the year of his death. The three mannequins, which were replaced with new figures in 1991, drew considerable attention in the museum and shocked visitors.

In 2010, a general plan to renovate the museum was made and an advisory committee, comprised of experts, began considering the museum’s exhibits and agreed on the idea of removing the mannequins from the museum. In response, a campaign to collect signatures for people to express opposition to this decision was launched on the internet.

Hironobu Ochiba, 41, a curator who was involved in the process of selecting 538 items for the renewed exhibition space said that they wanted to choose items that “would enable visitors to imagine and feel for the death of every A-bomb victim, the sorrow of the bereaved family members, and the suffering of the A-bomb survivors.” During this process, Mr. Ochiba also reflected on the question posed by Toshihiro Kanai, a journalist and activist who advocated the creation of a white paper on the consequences of the atomic bombing and its submission to the United Nations in the mid-1960s.

Mr. Kanai had asked: “Have the atomic bombs come to be known for their power, or for their human tragedy?” Like Mr. Nagaoka and Mr. Yamasaki, Mr. Kanai devoted half of his life to gathering materials related to the atomic bombing. The renewed exhibition space is an opportunity for people to return to the origins of the Hiroshima tragedy and contemplate nuclear weapons as fellow human beings.