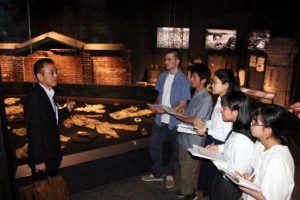 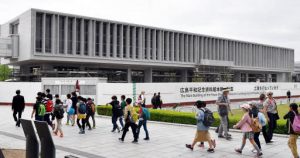 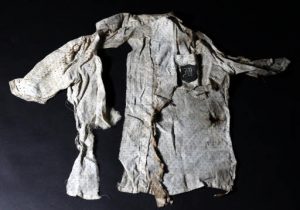 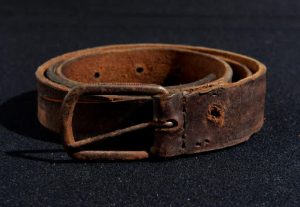 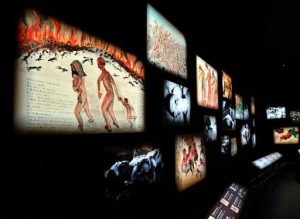 The Hiroshima Peace Memorial Museum, located in Naka Ward, reopened at the end of April after around five years of extensive renovations in the museum’s two buildings, which closed, in turn, for this renovation work. Visitors are now able to tour both buildings again. The main building of the museum focuses on exhibiting personal belongings of the A-bomb victims as well as a range of authentic artifacts that can enable visitors to comprehend the devastating consequences of the atomic bombing. Since the reopening, many Hiroshima residents and tourists from both Japan and abroad have visited the museum and gained a deeper understanding of what happened in Hiroshima on August 6, 1945. The junior writers of the Chugoku Shimbun have also paid a visit to the museum and, in this article, we share the sections of the museum, and the displays, that made strong impressions on us.

Guided by Shuichi Kato, 58, the assistant director of the museum, the junior writers toured the main building which focuses on the “Reality of the Atomic Bombing.” The exhibits in the main building are divided into four sections including the section titled “Cries of the Soul.” The building displays some 300 authentic items, such as charred work pants of the A-bomb dead and a wall which bears marks of the black rain that fell in the aftermath of the A-bomb blast.

Each exhibit includes informative explanations in both Japanese and English. Mr. Kato said, “The text for the explanations has been made as brief and concise as possible so that visitors will study the items closely and imagine the thoughts and feelings of the owners of these belongings and their family members.” These items are displayed with photos of the victims, or the victims with family members, to appeal to the emotions of the viewer.

There is also a newly established section which highlights the fact that there were also A-bomb victims of other nationalities, including Korean people and Southeast Asian students who were attending schools in Hiroshima. In this section, visitors will recognize that the atomic bomb indiscriminately took the lives of so many, regardless of nationality.

The east building, which visitors enter after touring the main building, provides details on the technology behind the atomic bomb and the history of its development as well as information regarding the damage to human health caused by radiation released by the bomb. Visitors will also grasp that the world remains threatened by nuclear weapons. On the day that the junior writers toured the museum, some visitors were looking closely at the “media tables” (touch-screen computer terminals) which offer information on post-war peace activities.

Recently, there have been many visitors from overseas. According to the museum, one-fourth of the visitors to the museum are non-Japanese. Mr. Kato said, “We would like to make the museum a place that can convey the desire for peace and the continuing suffering of A-bomb survivors to the world.”

The blouse belonged to Toshiko Omoto, who was 17 years old at the time of the A-bomb attack. She loved fashion and was a very kind and considerate sister to her younger brother.

On August 6, 1945, she was on her way to her work site, helping to tear down homes to create a fire lane in the event of air raids, when the atomic bomb exploded above the city of Hiroshima. She experienced the bombing while on the Hijiyama Bridge (now a part of Minami Ward), about 1.7 kilometers from the hypocenter. At the time she was wearing the blouse that is now being exhibited in the museum. The bomb’s heat rays charred the blouse in the right chest and sleeve areas, leaving holes.

When her family found her on August 14, she had no hair and no ears and her eyeballs were bulging out of her eye sockets. Afterward, she would often say, “If I stay here at home, no one will want to marry my little brother.” She anguished over the fact that her appearance had changed so completely. Suffering from terrible pain, Toshiko died about two months after the atomic bombing.

She had no hope for a life in the future and, in fact, was worried about causing her family great difficulty if she survived. We felt so sad as we learned her story.

Leather belt that was a present from parents for entering school

Osamu Nanko, a first-year student at First Hiroshima Prefectural Junior High School (now Kokutaiji High School), lost his life in the atomic bombing while helping to tear down buildings with many classmates in Zakoba-cho (now a part of Naka Ward). He was 12 years old at the time.

His face was so badly burned that he could not be identified. His burnt skin was peeling off his body and he was clad only in his underwear. But he was holding his leather belt tightly in his hand, a present from his parents when he entered junior high school. After being brought home, he died on the evening of August 6 with his mother and older brother by his side.

The leather belt was then kept in good condition, which indicates that his bereaved family treasured this memento out of the grief they felt over Osamu’s death.

Devastation on August 6: Reality which struck young people of roughly the same age

In the first section of the main building, which is titled “Devastation on August 6,” visitors see larger artifacts, such as a steel frame bent by the blast and a mass of glass melted in high temperatures, as soon as they enter the building. Viewing these exhibits, visitors cannot help but imagine the catastrophic conditions in Hiroshima after it was hit by the atomic bomb.

The glass case in the center of this section contains a collection of scorched clothing and bloodstained bags that belonged to children who were helping with building demolition work at the very moment the atomic bomb exploded above the city. These children, who became victims of the attack, were around the same age as us. As we looked at photos of people who suffered severe burns and drawings of the bombing made by survivors, arranged together on the wall, we couldn’t help wanting to cover our eyes. But these are images that convey exactly what transpired in Hiroshima. Standing in front of these photos and drawings made us feel like we were actually standing amid the devastation of Hiroshima on the day of the atomic bombing.