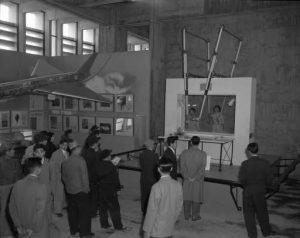 The City of Hiroshima contends that it has now carried out the third large-scale renewal of the Peace Memorial Museum since the museum first opened in 1955. The first renewal was pursued in 1975, to prevent the deterioration of the museum’s artifacts, while the second renewal took place in 1994 to renovate the adjacent Peace Memorial Hall and have it become the museum’s east building.

However, the museum exhibits were renewed substantially in 1956, one year after the museum opened, and also in 1958. At that time, the “peaceful use” of nuclear energy was promoted as part of the permanent exhibition. The museum then continued to display the materials on this theme, which were provided by the U.S. government, for some time. But why?

In the Peace Declaration of 1948, which was the second year since the mayor of Hiroshima began to make this declaration under the postwar occupation, Shinso Hamai, then the mayor of Hiroshima and a force for the city’s reconstruction efforts, encouraged people to devote themselves to building peace in the world and a human civilization that would seek a bright new age and make use of atomic power for peaceful purposes. In 1951, Arata Osada, a professor at Hiroshima University, compiled the book Children of the A-bomb, a collection of accounts from children who had experienced the atomic bombing. In the preface to his book, Mr. Osada wrote that the peaceful use of nuclear energy would be a great virtue for the world.

Both men experienced the atomic bombing. From early on, the appeal for utilizing nuclear energy for “peace building” or “industrial growth” was made by some in A-bombed Hiroshima because they intimately understood the tragedy of the atomic bombing. Other citizens also voiced strong support for nuclear energy in their desire to find meaning in the appalling deaths of their loved ones.

However, they could not isolate themselves from the Cold War.

In 1953, Dwight Eisenhower, then the U.S. president, delivered a speech titled “Atoms for Peace” at the United Nations, and exhibits on the peaceful use of nuclear energy began to be held in Western nations.

Such an exhibit opened in Japan in November 1955, in Tokyo, and toured Nagoya, Kyoto, and Osaka. In Hiroshima, displays on the peaceful use of nuclear energy opened at the memorial hall (5,165 square meters) and at the museum (2,838 square meters) on May 27, 1956.

The A-bombed artifacts, which had been on display at the museum prior to the exhibition on nuclear energy, were moved to the city’s central community center because the U.S. side requested that they be relocated, saying that displaying these artifacts in parallel with the nuclear energy exhibition could impact its objective. (Source: Evening edition of the Chugoku Shimbun published on March 22, 1956) The exhibition was co-sponsored by Hiroshima Prefecture, Hiroshima City, Hiroshima University, the Hiroshima American Cultural Center (ACC), which was part of the U.S. Information Agency, and the Chugoku Shimbun.

The exhibition included a full-scale mock-up of an experimental nuclear reactor, models of a nuclear-powered plane and train, which kindled dreams in children, and a demonstration of the “magic hand” in which female students mimicked the remote handling of radioactive materials through a glass window. During the 22-day run of the exhibition, there were about 109,500 visitors. The number of visitors to the museum in fiscal year 1956 was about 228,000.

The museum was subsequently used as a “Nuclear Energy Science Pavilion” when the Hiroshima Restoration Exposition was held from April 1 to May 20 in 1958.

At the request of the City of Hiroshima, 10 items from the previous exhibition in the United States were donated by the U.S. government, and materials such as the “magic hand” system and a radiation detector were then displayed in the Hiroshima Peace Memorial Museum. The pavilion also introduced the activities of the Japan Atomic Energy Research Institute (JAERI), which launched Japan’s first nuclear reactor in the village of Tokai, Ibaraki Prefecture in 1957. By then, the population of Hiroshima had reached 400,000, and the exposition touted the nation’s economic growth.

There is a document, held at the National Archives and Records Administration (NARA) in the United States, which reveals the intent of the U.S. government in donating these materials for the exhibition held at the museum in Hiroshima. The document notes: “While the original items in the museum were not necessarily anti-American in character they did tend to leave an unpleasant feeling toward those who dropped the bomb.” It also referred to the layout of the museum’s display, stating “…a visitor will pass through the original Japanese display first and pass through the peaceful-uses display last, thus tempering what he saw at first with a constructive view of atomic energy.” (Source: Foreign Service Dispatch issued by the U.S. Information Service, Tokyo on January 29, 1958) Robert McHenry, the director of ACC, and Hiroshima Mayor Tadao Watanabe were responsible for negotiations with the U.S. government.

The exhibition on the peaceful use of nuclear energy continued at the museum under the municipal administration led by Mayor Hamai, who returned to this office after being elected once more. And when did the exhibition finally close? In the Chugoku Shimbun of May 7, 1967, there is an article which says that the exhibit items had been completely removed. However, a book about the museum’s history covering three decades (edited in 1987) holds no explanation of the fact that these items were once part of the permanent exhibition, but were removed.

With this latest renewal at the museum, there is now an exhibit about people of other nationalities who suffered in the Hiroshima bombing alongside Japanese residents. Kenji Shiga, 66, the former director of the museum who stepped down at the end of March, has proposed that an external body be established to monitor the museum’s operations, arguing, “It is important that the museum be consistent about the direction of its exhibits.” The museum has gone through various twists and turns over the course of its existence. If its functions should be strengthened further, this can happen through the voices and the support of not only experts but also the citizens of Hiroshima and visitors to the A-bombed city.