Thoughts from Hiroshima, three years after Obama’s visit to the A-bombed city 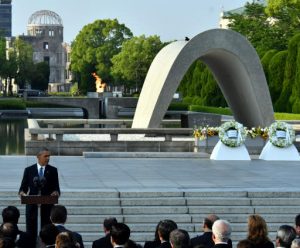 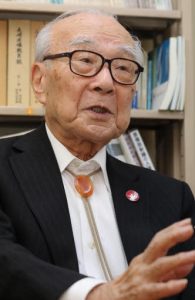 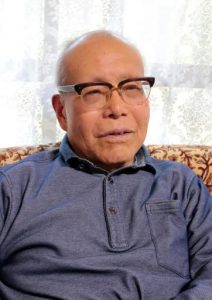 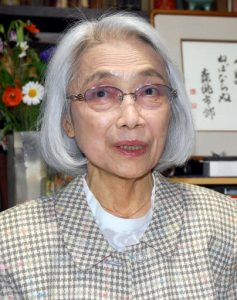 On May 27, Hiroshima marked the third anniversary of Barack Obama’s visit to the A-bombed city, the first such visit by a sitting American president. He was in Hiroshima for 52 minutes, which included a 17-minute speech in front of the Cenotaph for the A-bomb Victims and a 10-minute visit to the Hiroshima Peace Memorial Museum in the Peace Memorial Park. Did his visit here help make any movement toward “a world without nuclear weapons”? We asked three people who witnessed that historic moment to look back on that day and the three years that have passed since Mr. Obama’s visit.

He took no action to advance nuclear abolition

In the speech Mr. Obama gave at the Peace Memorial Park, I was especially impressed by the words “moral awakening” because that was exactly what I had been thinking. Unless each person becomes conscious of “the need to eliminate nuclear weapons,” this problem will not be resolved.

I was there at the park, representing Nihon Hidankyo as a survivor of the atomic bombing of Nagasaki. I rejoiced when I heard him say these words and I thought, “That’s exactly what I want to hear.” Back then, we had just begun promoting the Hibakusha Appeal, a worldwide signature drive calling for a treaty to ban and eliminate nuclear arms.

However, not only did he make no substantial progress in nuclear disarmament, he sought to modernize the U.S. nuclear arsenal. Although he could continue to wield some influence after leaving office, we don’t hear anything from him when it comes to nuclear issues. It’s unfortunate that there’s a feeling of disappointment about him which has spread among the people, who had been counting on his efforts to help us realize “a world without nuclear weapons,” the vision he described in the speech he gave in Prague 10 years ago.

I think that the United States is an “honest” country, in a sense. They chose Donald Trump to succeed Mr. Obama as president. Mr. Trump doesn’t hesitate to use threats to try to win favorable terms for his country. He does not understand the common sense of this world. The Trump administration unilaterally withdrew from the Iran nuclear deal, and now it’s putting increasing pressure on Iran, which has said that it will stop fulfilling part of its obligations under the deal in the wake of the U.S. withdrawal. The political tactics being used by the current U.S. administration are very dangerous.

There is a harsh reality in Japan as well. Prime Minister Shinzo Abe once appealed for the abolition of nuclear weapons with Mr. Obama before the Cenotaph for the A-bomb Victims. But now he does whatever Mr. Trump wants. In my opinion, Japan has become nothing short of a client state.

I sometimes ask myself whether my appeal is too weak to be heard. I had expected that people would respond to an appeal from A-bomb survivors, but the Hibakusha Appeal has not spread to the extent that I expected. I will continue racking my brain to lead the world down the path to a “moral awakening,” asking young people, “What kind of country do you want to make a happy life in?”

If another nuclear weapon is used, the only outcome can be annihilation. When people realize this, they will know what needs to be done.

I will continue telling about the brutality of the atomic bomb

I never expected that I would be invited to hear the American president’s speech in person. Thinking that this was the opportunity of a lifetime, I was listening to him very keenly. Then suddenly, I heard Mr. Obama talking about me, someone who has devoted himself to bringing comfort to the souls of the American prisoners of war (POWs) who lost their lives as a result of the Hiroshima bombing. I was so surprised that I thought my pounding heart might burst right out of my chest. At the same time, I recognized that I indeed have a presence in a corner of this history. After the speech, Mr. Obama took my hands and held them tightly, then embraced me and patted me on the back.

I experienced the atomic bombing when I was eight years old. There was only a fine line between life and death. In the process of studying our local history, I felt, “As a survivor, I want to investigate these neglected American soldiers and let their family members know how their loved ones died.” I resolved to trace the fates of the 12 American POWs who were being held in Hiroshima at the time and I kept up a correspondence with their family members.

Mr. Obama and I exchanged few words, but he embodied his appreciation for these efforts. I believe there was an understanding between us.

Since that day, I have been invited to visit a number of places. Last year, my wife and I visited the United States for the first time, attending a ceremony to console the spirits of the American POWs who died in the atomic bombing and speaking at various locations. After a screening of “Paper Lanterns,” the film which covers my life and work, I talked with the audience. They came up to me and thanked me for my lifelong efforts investigating the lives of what were enemy soldiers. At every place I visited, people would stand at the end of the event and applaud.

While I had many positive experiences, I also realized some things. When I told them that A-bomb survivors are still suffering from the aftereffects of the bomb’s radiation, people were very surprised. I was shocked to find out that most Americans don’t really know about all the damage that was caused by the atomic bomb. Thanks to the fact that I met Mr. Obama, I’m now able to communicate directly with these people. We have to continue showing the movie, and make more efforts to convey the terrible consequences of the atomic bomb.

Mr. Obama’s successor, Donald Trump, seems to care only about the interests of his own country and doesn’t think about peace in the world. As long as I’m asked, I will continue calling on people to “work together to make a peaceful world without war.”

We should pursue U.S. responsibility for dropping the atomic bombs

Eleven days before U.S. President Barack Obama visited Hiroshima, we sent a letter to the White House with this request: “You will see with your own eyes that no use of nuclear weapons can ever be justified. These weapons threaten the continued survival of our species. Please save us from this threat by declaring, from Hiroshima to the world, that nuclear weapons are inhumane, unusable, and must immediately be abolished” and “Please tell the world that the dropping of the atomic bomb was a mistake. Please offer a sincere apology to the departed victims, and to those who managed to survive.”

By dropping the atomic bombs on Hiroshima and Nagasaki, the United States massacred scores of civilians in these two cities. And since then it has been the world’s biggest nuclear power. We, as citizens as Hiroshima, were determined to hold the leader of this country responsible for the A-bomb attacks.

Mr. Obama began his speech with the words, “Seventy-one years ago, on a bright cloudless morning, death fell from the sky, and the world was changed.” It’s like this had nothing to do with the United States. There were no words of determination to abolish nuclear weapons nor any concrete measures to reduce that nation’s nuclear arsenal.

However, there was a mood of “friendship” or “reconciliation” that was sweeping inside and outside Hiroshima, which suddenly made it hard to see the unresolved issue that the United States has long continued to justify the use of the atomic bombs. How much willpower can we retain to represent the mortification of those who perished instantly in the atomic bombings? I think this is a serious challenge facing the people of Hiroshima.

On that day, we held a joint symposium for the public titled “The Significance of President Obama’s Visit to Hiroshima and the Questions This Raises” following his speech at the Peace Memorial Park, which we watched to the end on television. While some praised his visit to the city, others were critical of his speech, which lacked substance, and his tour of the museum, which was much too brief. However, it was rather difficult to get the public or the media to view things with a cooler eye because the whole country was consumed with a welcoming mood.

In the year following President Obama’s visit, the Treaty on the Prohibition of Nuclear Weapons was established at the United Nations with the support of 122 countries and regions. The leaders of Japan and the United States, who pledged to realize “a world without nuclear weapons” while standing in front of the Cenotaph for the A-bomb Victims, have turned their backs on the treaty. Working together with other countries and citizens’ groups that share the same goal is the only way to advance the cause of nuclear abolition.