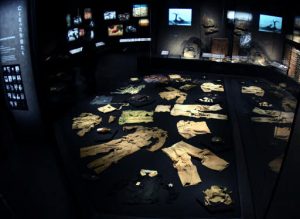 In 1994, the year before the 50th anniversary of the atomic bombing, the City of Hiroshima revised this ordinance, which was originally issued in 1955, to clearly define the museum’s purpose. The Peace Memorial Hall, which stood next to the museum, was integrated into the museum and then became the museum’s east building.

In addition to the museum’s original functions — collecting, storing, exhibiting, investigating, and researching A-bombed materials — the revised ordinance specified further activities that include “lending museum materials,” promoting peace education,” and “handing down the A-bomb experience to the next generation.” Until then, the museum was sometimes referred to as a mere exhibition house. The museum had no catalog of its collection and exhibition, either.

Masaki Kano, 64, then the city official of Hiroshima who drew up the proposal to create the catalog, was transferred to the museum when the city moved its personnel in 1994. He was surprised when he entered the underground storage room of the east building for the first time. Mr. Kano recalled, “I had no idea which item was at which location. The items were simply being laid in the storage room.” Until a year before the ordinance was revised, only seven people were working at the museum, and this included part-time staff. The budget was insufficient, too.

In 1995, two dedicated curators were assigned to the museum as part-time employees. Mr. Kano spent most of his time in the storage room and, with the curators, sorted the collected materials, which came to about 12,000 items. Checking the available registry, which lacked needed details, they assigned a category number to each item, added the name and contact information for the donor, described the circumstances under which the artifact experienced the atomic bombing, and attached a photograph. It took three years to create a search card for each item, organize them, and establish a system for making use of the cards to locate particular materials. A database for the collection was then developed.

In cases where the details of how the artifact had been exposed to the atomic bombing were unknown, or the donor had died, they had to seek out another person who might have a connection to the item, or they would use other records on the bombing to help fill in the blanks. This sort of low-profile work was performed by two people including Kiyomi Sato, 46, a curator who was hired by the city in 1995. Ms. Sato, as well as her younger colleagues, have also continued to interview each donor when new donations are made to the museum. The annual exhibition of newly-donated artifacts began to be held at the museum in 1996.

The museum’s functions were strengthened when the city outsourced its administration and operations to the Hiroshima Peace Culture Foundation, a foundation which was originally part of the city office and was reorganized in 1998. Minoru Hataguchi, 73, a former museum director who held the position for nine years from 1997, looked back at that period and said, “There was criticism about outsourcing the museum’s operations with people saying that this would undermine the administration of Hiroshima’s peace efforts. But because of this change, we were able to handle staffing and the budget in more flexible ways.” In addition, Mr. Hataguchi shared an episode about publishing the catalog that had not been previously known.

In October 1997, then Imperial Prince Akishinonomiya and his wife toured the museum for the first time when they attended the national urban greenery fair in Hiroshima, and Mr. Hataguchi served as their guide. On the following day, he received a message from the couple, asking for a book for their children that explained the museum’s exhibits. He said, “Thanks to that message, our budget request to the city for creating the catalog was smoothly approved, though before this occurred, getting that approval had been a challenge.”

The 127-page catalog titled The Spirit of Hiroshima: An Introduction to the Atomic Bomb Tragedy was published in 1999. With a focus on the museum’s collection, it describes, in Japanese and English, the actual conditions of the atomic bombing and the history of the city’s recovery from the ruins. To date, it has sold more than 126,000 copies, which is quite unusual for a book on the subject of the atomic bombing. In 1999, the museum launched a peace database on the internet, and a program of peace volunteers in which Hiroshima citizens guide visitors through the museum and the Peace Memorial Park.

Currently, the museum shares information on about 18,000 A-bombed artifacts (1,200 of these items include explanation in English); 4,600 drawings that depict the atomic bombing (1,100 of these include English text); and 66,000 books and magazines, some of which where handed down from the A-bomb Memorial Archives. There are now 203 volunteers lending their support to the museum. And more curators have been hired, with eight curators working at the museum since April.

The museum now attracts many visitors, but Mr. Hataguchi, now working as a volunteer at the museum, still feels some frustration. He said, “The atomic bomb is the devil’s weapon and has caused great physical and mental suffering to human beings, even after 70 years. I’m not sure if the museum has sufficiently fulfilled its role in moving people closer toward nuclear abolition.” He was exposed to the atomic bomb while in his mother’s womb and he lost his father because of the bombing.

The Peace Memorial Museum also serves as a place where people can gather regardless of their generation or nationality and reflect on the atomic bombing. Both the power of the City of Hiroshima, which established the museum, and power of its people, are now being tested.