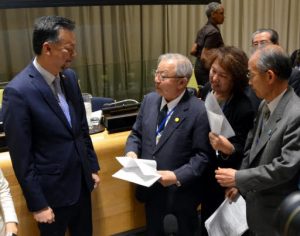 Japan does not live up to its self-appointed role

On April 30, A-bomb survivor Sueichi Kido, 79, met with Nobushige Takamizawa, Japan’s Ambassador to the Conference on Disarmament, at the office of the Permanent Mission of Japan to the United Nations in New York. Mr. Kido, the secretary-general of the Japan Confederation of A- and H-Bomb Sufferers Organizations (Nihon Hidankyo), was visiting New York to attend the third Preparatory Committee for the 2020 Nuclear Non-Proliferation Treaty (NPT) Review Conference. He called on the Japanese government not to shy away from the Treaty on the Prohibition of Nuclear Weapons, urging the government to sign and ratify this treaty.

After meeting with the ambassador, Mr. Kido expressed his frustration by saying, “Will I be able to see nuclear disarmament advance before I leave this world? As the country that experienced the atomic bombings, Japan’s stance should be based on the devastating consequences that nuclear weapons can cause to human beings.” The Japanese government remains opposed to the treaty and says that Japan will not sign it, arguing that the treaty could widen the gap between the nuclear weapon states and the non-nuclear weapon states.

Japan concerned about the U.S.

The Japanese government claims that it seeks to serve as a bridge between the nuclear weapon states and non-nuclear weapon states. Officials from the foreign ministry said that this proposal was made so that the recommendations could be adopted by consensus. But the non-governmental organizations (NGOs) do not agree. Christian Ciobanu, the U.N. representative of the PEAC Institute, which promotes peace education, said that the Japanese government seems to tied down by concerns about the United States.

Japan also sided with the nuclear weapon states in the discussions over nuclear disarmament. The United States did not propose any concrete ideas for reducing nuclear arms and instead called for creating a conducive atmosphere for making progress in nuclear disarmament, referring to the difficult conditions of the current international security environment. Japan welcomed the U.S. idea as an opportunity for constructive dialogue, but the other non-nuclear weapon states expressed wariness, wondering if the United States would use this suggestion as an excuse not to fulfill its obligations under the NPT. Japan requested that the nuclear weapon states provide more explanation about their nuclear policies, but did not point out that nuclear disarmament is now backsliding under the administration of U.S. President Donald Trump. The United States is now engaged in developing smaller-sized nuclear weapons, which could potentially lower the bar for using nuclear arms.

Since the adoption of the nuclear weapons ban treaty at the United Nations, there is greater awareness that Japan, which depends on the U.S. nuclear umbrella, has taken a stance that is actually closer to that of the nuclear weapon states. All the more because of this, many participants at the Preparatory Committee expressed hope that the A-bomb survivors and A-bombed cities will send out more messages at the grassroots level. A-bomb survivors were working hard to share their A-bomb accounts at local colleges and events connected to the conference. Hiroshima Mayor Kazumi Matsui, Nagasaki Mayor Tomihisa Taue, and Hiroshima Governor Hidehiko Yuzaki also visited New York and called for progress in nuclear disarmament.

Movement of citizens is key

After directly listening to Mr. Kido about his wish for the abolition of nuclear weapons, Mr. Syed said at a press conference that A-bomb survivors had an important role to play in telling younger generations about the devastation that nuclear weapons can cause and the importance of nuclear disarmament. He expressed his hope that the survivors will continue delivering strong messages prior to next year’s NPT Review Conference.

According to Mr. Ciobanu of the PEAC Institute, for Japan to again have an influential role in the area of nuclear disarmament, the country must engage in dialogue with civil society and younger generations. He added that only public pressure can move the national government, expressing his hope that Japanese citizens will continue pressing their government to take action. The A-bomb survivors have long been leading the nuclear abolition movement, but they are getting old. The people of Japan, as well as the Japanese government, must now make greater efforts to advance the goal of nuclear abolition.

Treaty on the Prohibition of Nuclear Weapons
This is the first international treaty to comprehensively prohibit the development, stockpiling, use, and threat of using nuclear weapons. The preamble of the treaty includes these words: “…mindful of the unacceptable suffering of and harm caused to the victims of the use of nuclear weapons (hibakusha).” The treaty was adopted at the United Nations in July 2017 with the support of 122 nations and regions. It will enter into force 90 days after 50 countries have ratified it. Currently 23 countries and regions, including Austria, New Zealand, and Thailand, have ratified the treaty.