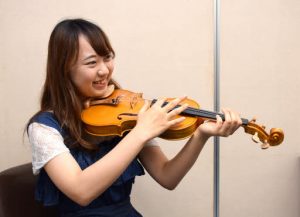 Hiroshima University has made a violin with parts that came from a tree that survived the atomic bombing with the aim of handing down the A-bomb experience. The violin will be played by a student during a peace-themed event to be held at the university’s Higashisenda Campus in central Hiroshima on August 6. The sound of the violin made from wood that endured the atomic bombing will encourage more people to cherish a desire for peace.

The wood was taken from a weeping willow that stands along the Honkawa River in downtown Hiroshima, about 370 meters from the hypocenter. Part of the trunk of the tree, which is taken care of by the national government, was removed in December 2017 because of serious damage.

Learning about the tree, Rebun Kayo, 41, a researcher at Hiroshima University, suggested that a violin be made using its wood. The university obtained the damaged part removed from the tree from the national government and asked Hiroshi Mihara, who has a violin-making workshop in Mihara, a city in eastern Hiroshima Prefecture, to produce one. Mr. Kayo is also involved in gathering the remains of A-bomb victims.

The wood from the tree was made into a chin rest and pegs, which are used when tuning a violin. The violin’s ribs are made of wood from a Japanese snowbell tree that was felled last year during the excavation of victims’ remains on Ninoshima Island, where many A-bomb victims were buried. The cost to produce the violin was about 900,000 yen.

The violin will be played when students visit nursing homes for A-bomb survivors and on other occasions in the future. Mr. Kayo said, “I hope the sound of the violin will comfort survivors and give young people a chance to start taking action to realize a peaceful world.”

During the event to be held on August 6, the violin will be played by Hinako Wakinaka, a member of the Hiroshima University Kasumi Orchestra and a second-year student at the university’s school of dentistry. She said, “I have been taking peace-related subjects at the university. I plan to express the sentiments I’ve come to have through playing the violin.”

The first use of the violin will be from 10:45 a.m. at the university’s Higashi-Senda Innovative Research Center. Besides the concert, a discussion will be held where Japanese students and international students exchange ideas on peace. Admission to the event is free and no reservations are required.