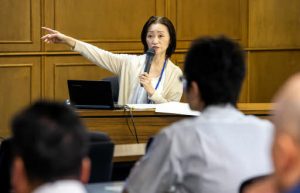 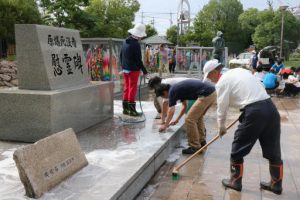 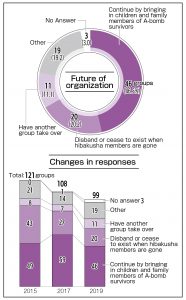 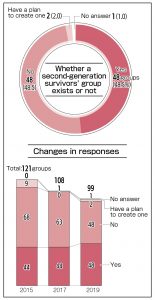 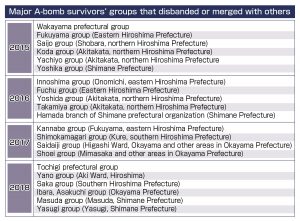 A survey conducted by the Chugoku Shimbun has revealed that A-bomb survivors’ organizations are facing difficult times, with some disbanding or suspending their activities. The survey covered 109 groups of survivors, including local groups in Hiroshima and four surrounding prefectures as well as prefectural organizations in other parts of Japan. As the survivors age, they are unable to remain as active and thus their activities are on the decline. Hopes are high for second-generation survivors and younger people to take over the survivors’ activities. Based on the responses that were returned from 99 organizations, this article will detail the findings of the survey and look at the current circumstances of the survivors’ movement as we approach the 75th anniversary of the end of World War II next year.

A peace study meeting was held at Fuchu City Hall in eastern Hiroshima Prefecture on July 11. In this session sponsored by a citizens’ group, Manami Funai, 55, a part-time worker living in the nearby city of Fukuyama, served as a speaker. She began her talk by asking the participants, “Do you know the average age of the A-bomb survivors?”

Ms. Funai is a “peace mate,” a member of a new organization that supports A-bomb survivors in Fukuyama City. Anyone can become a peace mate and take part in the group’s activities with A-bomb survivors or their children.

Born in the city of Hiroshima, Ms. Funai moved to Fukuyama some 20 years ago. Though she has no relatives who are A-bomb survivors, she has become a peace mate to ponder peace issues with her daughter Konami, 18. She is also “memory keepers” of the City of Hiroshima, volunteers who have inherited A-bomb survivors’ experiences to continue conveying them to others.

This past spring, Konami entered a university in Kanagawa Prefecture, which is near Tokyo. She plans to return to Fukuyama during her summer vacation and serve as the emcee at a memorial ceremony held by the group on August 6. Ms. Funai said, “I can hear the honest feelings of survivors. Since I was born in Hiroshima, I thought I knew a lot about the atomic bombing. But I’ve realized that there are many things I don’t know.”

The group was formed in April 2015. Its predecessor was disbanded in March of that same year because there was no one to take over its efforts. Hoping to continue the group’s activities, some survivors and second-generation survivors took the lead in creating the group. To bring in the energy of young people so that their activities can continue, the “peace mate” system was introduced.

Satoru Fujii, 72, is a second-generation survivor and has been acting as the head of the group since its establishment. He said, “The survivors’ movement will go downhill if it continues to depend on survivors and their family members.” When the former group was having discussions about whether it should disband, he often heard members say, “Our generation will be the last one. No one will follow us after we’re gone.” Their words of resignation made him more determined to continue the movement.

Serving as a group to accept members of disbanded groups

Among some 70 members of the group, there are about 25 A-bomb survivors and 25 peace mates. Others are second-generation survivors. The group is putting emphasis on handing down A-bomb experiences and, among other efforts, offers opportunities for junior high school and senior high school students and university students, who are peace mates, to meet A-bomb survivors. When a survivors’ group in the nearby Kannabe area was disbanded in 2017, its members joined the new organization that supports A-bomb survivors in Fukuyama, which serves as an organization that accepts members of disbanded groups.

On July 15, about 40 members of the group got together and tidied up a monument to A-bomb victims that is located in a park in the city center. Seeing survivors and young people working hard together in the field, Mr. Fujii reaffirmed his resolve. “We have been given new energy,” he said, “and we will take over the wishes of the A-bomb survivors forever.”

Future of organizations: 46% to continue, 20% to disband or cease to exist

With the members aging, one of the questions in the survey was about the future of the survivors’ groups. Out of the 99 groups that responded to the survey, 46, or 46.6 percent, the largest number, answered that the groups will have second-generation survivors and family members of A-bomb victims become members and carry on with their activities. Twenty respondents, or 20.2 percent, said that their groups will disband when the A-bomb survivor members are gone. Eleven groups, or 11.1 percent, said that they will have another group take over their activities. Nineteen groups, or 19.2 percent, chose “Other,” and three groups, or 3.0 percent, gave no answer.

In previous surveys conducted in 2015 and 2017, the same questions were asked. Compared to the results of the 2015 survey, the number of those that chose disbanding or ceasing to exist was reduced by half from 43. It appears that many groups have disbanded or ceased to exist over the past four years.

Plans for 75th anniversary of the atomic bombings in 2020

With next year marking the 75th anniversary of the atomic bombings, one question concerned the groups’ plans for memorial events. To strengthen their call for nuclear abolition, some groups plan to hold commemorative events or send their members to the Nuclear Non-Proliferation Treaty (NPT) Review Conference, which will be held in New York next spring.

The No More Hibakusha Hall in Sapporo, the only private-sector facility in eastern Japan that conveys the experiences of the atomic bombing, is managed by a Hokkaido organization. The group is planning to launch a website which shows artifacts related to the atomic bombings and the history of the hibakusha movement in Hokkaido. They also plan to convey information to young people and children using picture books.

The group in Nagasaki Prefecture, another place that suffered an A-bomb attack, has begun to recruit supporters who will help survivors go shopping, visit doctors, and assist with commemorative events. The supporters will start their activities in October.

◆About the future of your organization

Continue by bringing in children and family members of A-bomb survivors
46 (46.5%)

Disband or cease to exist when the hibakusha members are gone
20 (20.2%)

◆Do you plan to disband or merge with another group?

◆Do you have second-generation survivors in your group?

◆Do you have a group of second-generation survivors either within or outside of your organization?

◆What is the reason for not having a second-generation survivors’ group? (For 48 groups that answered that they do not have one)

◆Do you think that the mayor of Hiroshima should call on the Japanese government to join the Treaty on the Prohibition of Nuclear Weapons in his Peace Declaration?

◆Do you have plans for the 75th anniversary of the atomic bombing in 2020?