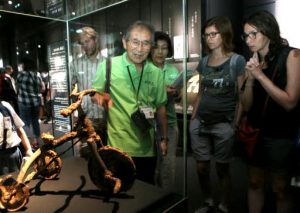 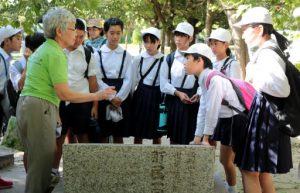 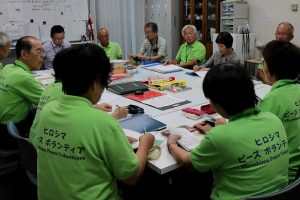 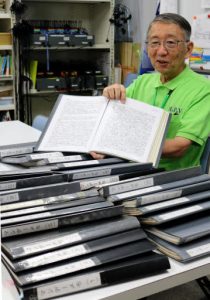 Hiroshima Peace Volunteers (HPV), a system managed by the Peace Memorial Museum in Naka Ward to register people as volunteer guides, marked its 20th anniversary this year. Presently, 202 volunteers between the ages of thirty and eighty-eight are registered with HPV, providing free, guided tours in the museum or at the cenotaphs and monuments in Peace Memorial Park. They have established a firm position as “guides of Hiroshima” for tourists coming from the other places within Japan, from overseas visitors, as well as to students on school trips. Still, it struggles to honor all requests for assistance because of the sharp increase of international tourists visiting the city.

“This point was Shima Hospital,” says Ryosuke Nagamuma, speaking in English to a pair of tourists in the east building of the museum. He’s showing them a panoramic photo taken at the hypocenter, which had been reduced to rubble. Naganuma, 78, lives in Nishi Ward, and is a member of Hiroshima Peace Volunteers.

Of the two women traveling from Paris, guided by Mr. Nagamuna that day, one of them, Anne Dintzner, 38, was with Mr. Nagamuna when he stopped in front of a few of the exhibits in the main building. His stops, where he explained the details of each in his quiet voice, included the iconic burnt tricycle, a lunchbox, and an “A-bomb painting” drawn by a survivor. The group spent about two hours going around the museum together.

Ms. Dintzner commented that she could understand and “feel” the lives of A-bomb victims behind the artifacts and photos by listening to the descriptions given by Mr. Nagamuna. She added that she appreciated getting to know what really happened in Hiroshima; a very far place for her before. Mr. Naganuma is a former employee at Mazda Motor Corporation, and has been serving as volunteer guide with HPV for twelve years. He said, “In having a casual conversation with visitors, I first try to understand their needs and questions, then adjust my explanation accordingly. I hope they feel that peace is very important, and return to their homes with that in mind.”

In April of this year, the museum’s main building reopened after a period of renovation, and the museum’s layout has been significantly redesigned to allow visitors to face and view artifacts left by the A-bomb victims in a quieter, individual fashion. As such, HPV guides have been seeking ways to provide effective guidance, or offer commentary about displays, taking into account the opinion of the museum, in this newly displayed area.

The HPV program began in 1998 after the Hiroshima Peace Culture Foundation, which oversees the museum, recruited volunteers to support visitors in learning about peace. Because A-bomb survivors are increasing in age, the initiative aimed to create a program that would allow for the transition of knowledge and responsibility of conveying A-bombing experiences from the survivors to younger generations. In April the following year, fifty-eight volunteers aged twenty through seventy had begun their work as HPV guides.

HPV guides hone their skills by independently organizing or participating in a workshop about peace education, and by sharing their personal knowledge—therefore, effectively guiding one another. Iwao Kumataka, 77, chief secretary of HPV and resident of Asakita Ward, said, “Our mission is to convince museum visitors the atomic bomb is an inhumane weapon and should never be used again. There is also a lot to learn simply by interacting with the guides.”

Favorable feedback gained after touring the outdoor cenotaphs and monuments

In addition to regularly offered tours, a guided tour given by HPV that circulates the cenotaphs and monuments located outside the museum has also gained a good reputation. During the school trip season, the museum receives seven to eight applications daily for this specific tour. During the tour, visitors walk around Peace Memorial Park for an about an hour, listening to the volunteer explain about A-bombed trees, or about what lies beneath the park area; a part of town formally very busy and crowded prior to the atomic bombing. Many schools apply for the tour each year because students can look around the park with ease, and obtain comprehensible explanations throughout.

While HPV members are registered as public guides, they conduct this work on a volunteer basis—receiving only remuneration for incurred transportation costs, and for a maximum of only two occasions monthly. The average age of the volunteers is 67.6. Their work can be considered difficult—walking around the monuments and giving explanations while staying on their feet under a blazing sky uses a lot of energy. A feature of the HPV program for visitors is that many of the registered guides are retired, giving them the opportunity to engage as guides during the week when visitors may be traveling.

The growing popularity of sightseeing in Hiroshima has affected HPV guides’ activities, though. In fiscal 1999, the number of international visitors to the museum was around 90,000, but it has surged by about five times that amount the last two decades, reaching 434,838 in the last fiscal year. Although sixty-seven English-speaking volunteers like Mr. Naganuma are registered with HPV, only a few are able to serve as guide on a recurring basis. Also, HPV only has one guide each for Chinese, Korean, and Spanish. Because of this, HPV has no option but decline many requests for guided tours from a variety of countries.

Given such conditions, this year the museum recruited an additional fifty volunteers for the first time in three years. The museum has also made it clear that it will increase the amount of transportation costs paid to the volunteers. Katsunori Hamaoka, 61, deputy director of the museum, said, “Our visitors’ satisfaction level has steadily increased, backed by the passion of our volunteers. We want to expand HPV’s average volunteer age bracket, and increase the number of volunteers who can speak foreign languages.”

Anyone who is 18 years old and over can register as an HPV guide, and the museum recruits new members when needed. Members are requested to serve as guides at least twice every month for one year or longer. Before debuting as a guide, volunteers need to attend lectures given by university faculty, or curators, regarding the damages caused by the atomic bombing as well as present worldwide nuclear conditions.

Presently, six HPV members engage as volunteer guides as well as sharing their A-bombing experience as A-bomb survivors. Other members include a young person who comes in from Tokyo on occasion, and those who work as “memory keepers” inheriting and handing down A-bomb experience to others, once being trained by the City of Hiroshima.

Manami Matsumoto, 30, is the youngest member of HPV. She now lives in Minami Ward, but is originally from Hyogo Prefecture. Ms. Matsumoto took on Hiroshima life when she entered university here, and became involved with HPV because she felt she may be among the last generation to listen to the recounting of A-bombing experiences directly from A-bomb survivors.

Once a visitor from abroad asked her if A-bomb survivors hated the United States. She didn’t know precisely how to respond, and recalls that experience with uncertainty, “I agonized over whether I really possess an understanding of the feelings of A-bomb survivors when I gave explanations about the atomic bombing to tourists.”

Ms. Matsumoto added, “I have been learning about the real conditions of the atomic bombing through my daily activity as volunteer guide, though, and I hope more young people will join HPV.”

1,000th edition of HPV newsletter to be issued, contributing to interactions among members and strengthening their capabilities

Over the last twenty years, Kenichi Harada, 74, a resident of Higashi Ward, has helped HPV members build upon their skillsets and interact with one another by editing and distributing his “Monday Memo,” a weekly e-mail newsletter. It has been continually released since April 2000, with only the occasional short lapse. Late next month, Monday Memo reaches its 1,000th edition milestone.

Mr. Harada’s newsletter has covered questions related to the atomic bombing such as: “Did the atomic bomb’s heat ray carbonize the entire human body?”, “What was the Honkawa National School like when it resumed the class?”, and “Did Israel conduct the nuclear test for developing nuclear weapons?” Volunteers investigate answers to such questions and share them with each other. The newsletter also provides information about the peace-related events. Readers can view all newsletters from the first edition to the latest in the room reserved for volunteers.

About thirty volunteers contribute articles periodically. Seiji Tsuji, 77, a resident of Nishi Ward who provides guidance as an HPV volunteer in both in Japanese and English, said, “Monday Memo is a valuable source of information for me in that it helps to deepen my overall knowledge.” Mr. Tsuji sends Mr. Harada feedback he hears from tourists almost every week.