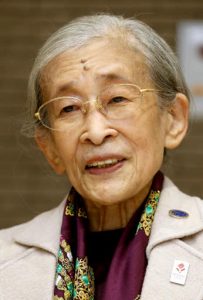 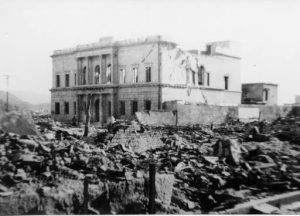 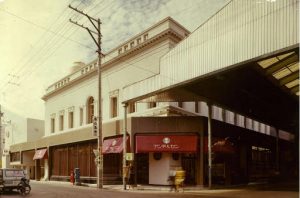 This month, Hiroshima Andersen, a bakery that is in the process of reconstructing its new building in the Hondori shopping arcade in Naka Ward, completed its efforts to affix the exterior wall, cut from the old A-bombed structure it used to occupy, to its new building. The completion of this work will enable the new building to be registered as an A-bombed building by the City of Hiroshima, like the company’s old building. The Chugoku Shimbun interviewed Akiko Takaki, 94, a senior advisor and a founder of the Andersen Institute of Bread & Life Co., Ltd., asking her questions that include her view of the former bakery building.

It all started when you and your husband Shunsuke (who died in 2001 at the age of 82) opened a small bakery in Hijiyama-honmachi in Minami Ward three years after the atomic bombing, didn’t it?
In those days, there was a critical shortage of food and everyone was hungry. But no one assumed that bread would sell well in Japan at that time. However, a high school girl told us, “I was thinking that living in a place that was so heavily damaged by the war had no meaning, but if I can eat delicious bread like this, I can go on with my life.” I could not forget her words, which made us want to keep baking the best bread we could for our customers.

You then bought a building that had been used as a bank and opened Andersen (now called Hiroshima Andersen) in October 1967. Why did you decide to utilize an A-bombed building for your bakery?
At first, I had no impressions of the building as a place that had experienced the atomic bombing. When I looked up at the high ceiling, I wondered how to make use of the building to sell our bread for 10 yen each. Most of the senior staff members insisted that the building should be torn down and reconstructed because it wouldn’t be convenient for us to use.

But when we visited Italy and Switzerland to look at the local shops, we found that many of them appeared old from the outside but were selling their goods in innovative ways on the inside. So we decided that we would never knock down the building we had bought. As it had an open ceiling space, we were able to create an atmosphere where our customers could have an enriching experience while shopping or having a meal. Certainly, though, we had some issues with the building. For example, we were unable to install the large showcase that we had imported from overseas because it was blocked by the thick pillars.

How do you feel about the fact that your building came to be known as an A-bombed building later on?
Many employees of the bank, who were in the building at the time of the atomic bombing, lost their lives in the attack. Therefore, I wanted to run a business that would benefit Hiroshima so their souls could rest in peace. But we never used the A-bomb experience of the building as a selling point. At our main building on the Hondori shopping arcade, we sought to create a “town” in our building in pursuit of “Hygge,” the Danish spirit, where people could enjoy a warm, cozy atmosphere through nice encounters with one another.

I believe many of the international visitors who come to Hiroshima are not only interested in the damage caused by the atomic bombing but are also attracted by the fact that Hiroshima was able to recover from this damage. Before our old building closed, visitors from overseas could learn about the catastrophe of the atomic bombing at the Peace Memorial Museum, walk around the downtown area, and enter Hiroshima Andersen, where, I believe, they were encouraged to keep moving forward even if they had experienced something tough and sad.

Next summer your new building will open, with the widely-known exterior wall of the old building still present. What are your thoughts about the new Andersen shop?
Our business grew along with the reconstruction and development of the urban area of Hiroshima, and was the result of working together in cooperation with the local community. Many of the local people came to feel as if they were the owners of our old shop. To return the favor of those who have helped our business thrive, we would like to provide new encounters and sources of entertainment for our customers, without being influenced too much by the latest trends.

Akiko Takaki
Born in Dalian, China, she graduated from the former Kyojo (today, Seoul) Girls’ High School No. 1. In 1948, she established the “Takaki’s Bread” shop with her husband, Shunsuke. In 1951, she took charge of public relations and sales for Takaki Bakery Co., Ltd. Since 2003, she has served the company in her current role. She was also the chair of the women’s group at the Hiroshima Chamber of Commerce and Industry from 2009 to 2013. She received the Chugoku Cultural Award in 2013.

Hiroshima Andersen’s former building
The two-story building with a Renaissance style was originally constructed as the Hiroshima Branch of Mitsui Bank in 1925. It survived the atomic bombing in 1945 when it was being used as the Imperial Bank Hiroshima Branch, located 360 meters from the hypocenter. In 1967, the Andersen Group purchased the building and continued to use it by performing a series of extensions and renovations. However, the building was closed in 2016 because the structure was not sufficiently quakeproof. In July 2018, it was torn down and part of the external wall was cut free for reuse.