How to send messages from Hiroshima as city marks 74th year since A-bombing, Part 1 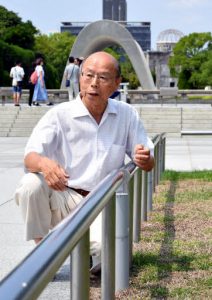 This year marks the 74th anniversary of the atomic bombing of Hiroshima. Efforts to hand down the A-bomb memories and send out messages from Hiroshima are now at a crossroads. What will become of the Peace Declaration, to be delivered at the Peace Memorial Ceremony on August 6? How about the exhibits in the renovated main building of the Peace Memorial Museum, which have been designed with a focus on authentic artifacts? The A-bomb survivors continue to pass away, one after another. In 2020, both the Nuclear Non-Proliferation Treaty (NPT) Review Conference, which serves as the basis for reducing nuclear weapons, and the Tokyo Olympics, which will attract global attention, will take place. In conjunction with these events, how will the people of Hiroshima pass on the memories and wishes of the A-bomb survivors to succeeding generations? In this series of articles, the Chugoku Shimbun will examine the efforts of the government and the people of Hiroshima and the issues to be faced in the future.

On the morning of August 6, the Peace Memorial Ceremony will again be held in front of the Cenotaph for the A-bomb Victims in the Peace Memorial Park, located in Naka Ward, Hiroshima. In mid-July, Kazuhiko Futagawa, 73, a resident of Higashi Ward, said, “It feels like my father’s bones are still lying somewhere in this park,” as he gazed at the stretch of lawn where chairs for those attending the ceremony will be set out from the main walkway. Mr. Futagawa was in his mother’s womb at the time Hiroshima was attacked with the atomic bomb. His earnest hope is that the Peace Declaration will represent the voices of many A-bomb victims and survivors.

Seventy-four years ago, Mr. Futagawa’s father, Kazue, then 47, was the manager of the Zaimoku-cho post office, which was located in one corner of the lawn and main walkway of the present-day Peace Memorial Park. On August 6, 1945, his father left home in Yaga-cho (now part of Higashi Ward), as usual, for his job at the post office. After the atomic bombing, Mr. Futagawa’s mother, Hiroko, who was pregnant with him at the time and who died in 2000 at the age of 87, searched in vain for Mr. Futagawa’s father and sister, Sachiko, then 13, who that day was helping with the work of tearing down houses to create a fire lane.

The Peace Memorial Ceremony is held in exactly the same location where Mr. Futagawa’s father, whom he never saw, used to work. At the ceremony he attended when he was 34 years old, he rang the Peace Bell as a representative of the bereaved family members. With the A-bomb survivors growing older, he came to feel, as one of the youngest survivors, that he has a duty to call for the abolition of nuclear weapons. Over the past five years, since he began his activities for the national liaison of the in-utero survivors of the atomic bombings, he has recognized the significance of the Peace Declaration more deeply.

Spiritual force is lacking in the Hiroshima Declaration

The members of various branches of the national liaison of the in-utero survivors of the atomic bombings have been promoting the Treaty on the Prohibition of Nuclear Weapons, and some have delivered speeches at the United Nations to call on all governments of the world to participate in the treaty. Mr. Futagawa hopes that the Peace Declaration will include words that will support their efforts to promote the treaty. However, members of branches other than the Hiroshima branch have recently criticized the attitude of Hiroshima, saying, “The spiritual force is lacking in the Hiroshima Declaration.”

The Treaty on the Prohibition of Nuclear Weapons was adopted at the United Nations in 2017. In the Peace Declaration he made in 2017 and in 2018, Hiroshima Mayor Kazumi Matsui did not directly urge the Japanese government to sign and ratify the nuclear weapons ban treaty. His approach was in stark contrast to that of Nagasaki Mayor Tomihisa Taue who explicitly called on the Japanese government to join and support the treaty.

Many A-bomb survivors and citizens of Japan and abroad believe that both the messages sent from the A-bombed cities of Hiroshima and Nagasaki and Japan’s participation in the treaty are key to getting the nuclear weapon states, which are against the treaty, to be involved in it. This past June, in the hope that the mayor of Hiroshima himself will play a leading role in this effort, 23 citizens’ groups in Hiroshima Prefecture asked the City of Hiroshima to clearly urge the Japanese government to sign and ratify the treaty in the Peace Declaration. One of the groups was the Hiroshima branch of the national liaison of the in-utero survivors of the atomic bombings, for which Mr. Futagawa serves as president.

In response to a similar request from A-bomb survivors’ groups, Mr. Matsui indicated that he would include a statement in the Peace Declaration to convey that the City of Hiroshima urges the Japanese government to sign and ratify the treaty. Mr. Futagawa hopes that Mr. Matsui will do this using unequivocal language.

Amid these circumstances, the Peace Declaration can play a significant role. “Are nuclear weapons a necessary evil? Hiroshima can ask this question outright,” says Mitsuhiro Hayashida, 27, a resident of Kawasaki City and the leader of the Hibakusha Appeal campaign which is urging all governments to sign and ratify the nuclear weapons ban treaty. Mr. Hayashida also believes it is important to highlight the problems with a security system that relies on nuclear weapons.

If nuclear weapons were inadvertently used as a result of a misunderstanding or a malfunction that caused an explosion, the result would be a cataclysmic disaster. Thus, in the Peace Declaration he delivered last year, Mr. Matsui pointed out that the idea of nuclear deterrence is inherently unstable. Hiroshima Governor Hidehiko Yuzaki also asked the world during the Peace Memorial Ceremony whether it is safe for neighbors, who are on unfriendly terms, to plant bombs in each other’s homes with the intent of deterring conflict.

Mr. Hayashida shared Governor Yuzaki’s speech, which he found particularly impressive, on social media. He said, “If messages questioning nuclear deterrence are shared online, people who tend to believe what the government says without much pause may have a reason to change their thinking.” His explanation suggests how citizens can make use of the words spoken by the mayor of Hiroshima, too.