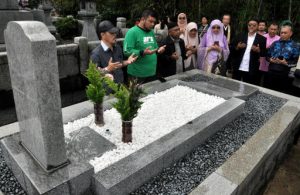 A group of visitors from Kota Bharu, Malaysia, paid a visit to the grave of Nik Yusof, a Southeast Asia Special Student who lost his life in the atomic bombing of Hiroshima and lies buried at Kozenji Temple in Saeki Ward. The visitors came to Japan to commemorate the 20th anniversary of the establishment of the friendship and handshaking city affiliation between the cities of Kota Bharu and Kasaoka in Okayama Prefecture. It was their first visit to Kozenji Temple. Mr. Yusof was also a native of Kota Bharu.

The group of visitors, consisting of 18 Kota Bharu municipal assembly members and city staff, were welcomed by Hiroshi Hoshizuki, 71, the former head priest of the temple, along with citizens who have been engaged in activities to hand down the story of the A-bombed Southeast Asia Special Students. The visitors put their hands together in front of Mr. Yusof’s grave and offered prayers.

Azman Bin Mohd Daham, 56, the manager of public relations for Kota Bharu, is a relative of Nik Yusof. He learned about Mr. Yusof’s grave through the internet and has visited the site once before. For the group’s visit to Japan, he included a visit to Mr. Yusof’s grave in their itinerary. He said, “I appreciate how the Japanese people have been looking after his grave, and I’m going to tell the public about this when I return to my own country.”

The A-bombed students were among 205 young people, including Mr. Yusof, who came to Japan from Southeast Asian countries under Japan’s Great East Asia Co-prosperity Sphere policy during World War II. Kota Bharu, located on the Malay Peninsula, was where the former Japanese Army carried out a landing operation at almost the same time as the attack on Pearl Harbor in 1941.

Mr. Yusof, who attended the Hiroshima University of Literature and Science (present-day Hiroshima University), was staying at the Konan-ryo foreign students dormitory, located about 900 meters from the A-bomb hypocenter, when the atomic bomb was dropped on Hiroshima. He was 19 years old at the time. He escaped from a collapsed building and fled toward Itsukaichi. However, his life ended on his way there, and an urn with his name written on it was placed in the care of Kozenji Temple. The head priest back then decided to erect an Islamic-style grave for him in 1964. Ever since, a service is held on a regular basis to mourn for him.