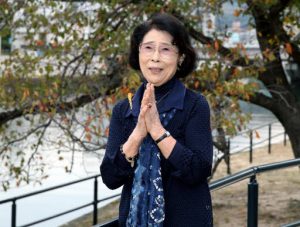 The visit to Hiroshima by Pope Francis is now just a month away. This will be the first visit to the A-bombed city by a pope in 38 years, since the late Pope John Paul II made his “Appeal for Peace at Hiroshima” in the Hiroshima Peace Memorial Park in Naka Ward. Amid worsening global conditions involving nuclear weapons, what will Pope Francis say during his time in Hiroshima? The Chugoku Shimbun spoke with A-bomb survivors who are eager to hear the pope endorse the elimination of nuclear arms in his message to the world.

“I thought it was a powerful speech.”

Fujiko Moritani, 83, a Catholic living in Minami Ward, Hiroshima, still cherishes the words spoken by the late Pope John Paul II when he visited in Hiroshima in February 1981, which marked the 36th anniversary of the atomic bombing. He began his appeal with the sentence “War is the work of man.” She listened to the speech in person and then left the Peace Memorial Park to visit her mother, Nobue Hada, in her hospital room. Ms. Moritani pondered the meaning of the pontiff’s first sentence with Nobue, who had watched the televised broadcast of the speech. “What the pope said is absolutely true,” they agreed. From the window, they looked on as a line of cars passed in front of the hospital and headed to the airport, one of the cars carrying Pope John Paul II.

On August 6, 1945, Ms. Moritani experienced the atomic bombing while at her home in Kawaramachi (now part of Naka Ward). At that time she was in the third grade at Kanzaki National School (now Kanzaki Elementary School) and was back at home after having been evacuated with her classmates to a rural town now called Kitahiroshima-cho. At the moment she thought she saw a flash, she became instantly trapped under the wreckage of the house. She managed to crawl out and escape through the flames of the city with her mother, who was carrying her elder sister, Shizuko, on her back because Shizuko had been injured.

Staying silent about the death of her brother

Ms. Moritani and her mother then searched for Kenji Hada, her elder brother and a first-year student at Hiroshima Municipal Junior High School (now Motomachi High School). Kenji had been mobilized to work for the war effort by helping to tear down houses to create a fire lane at Koamicho (part of today’s Naka Ward), about 800 meters from the hypocenter. Nobue wrote about her experience of the atomic bombing only once, in 1977, and described the moment she finally found her son with these words: “Kenji had burns all over his body and it was very hard to recognize him. When he saw me, he grabbed hold of me and said, ‘Mom, I wanted to see you,’ but he told me his eyesight was failing.” The next morning, after they had kept a vigil by his bedside through the night, he passed away.

Nobue left her daughters at the home of an acquaintance, then cremated Kenji’s body by herself. Imagining her mother’s feelings at the time, Ms. Moritani said, “My mother burned all of Kenji’s belongings, too. I guess she felt she couldn’t get over his death if she kept his things.”

After that, mother and daughter stayed silent about their memories of the atomic bombing. Nobue worked hard to establish a dormitory for mothers with dependent children who had lost their husbands because of the war, and she also served as chair of the Hiroshima Joint Association of Fatherless Families (now known as the Hiroshima Welfare Joint Association of Fatherless Families). Ms. Moritani converted to Catholicism after she became acquainted with this faith when her daughter attended a Catholic kindergarten, and she devoted herself to church activities, such as helping the homeless.

“Saving others is the work of man, too.”

Two years after she listened to Pope John Paul II’s “Appeal for Peace” during his visit to Hiroshima, Nobue died at the age of 83. In the last days of her life, she suddenly started to talk about her memories of the atomic bombing. Ms. Moritani said, “For my mother, the pope’s words may have been a source of salvation.” War is the work of man, but saving others is the work of man, too, her mother surely believed.

With Pope Francis set to make his visit to Japan, Ms. Moritani agreed to her first interview with the media because she feels, having lived a long life, that she has a duty to share her story. In mid-October, she visited the river side, accompanied by this reporter, where her brother experienced the atomic bombing. She said, “My brother was a kind boy. I still believe I wouldn’t have lost him if there hadn’t been a war.” This reflection brought back the injustice of the bombing once again.

Regarding her expectations for Pope Francis’s message, she said, “To this point, he has been devoted to helping the poor. When he is in Hiroshima, I would like to hear him speak out by rejecting war and calling for peace from the perspective of ordinary people.”