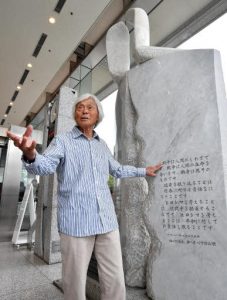 A white marble monument stands in the lobby of the Hiroshima Peace Memorial Museum, which is continuously crowded with visitors. The monument is inscribed with an excerpt from the “Appeal for Peace at Hiroshima” given by the late Pope John Paul II when he spoke in Hiroshima in February of 1981. The words read, in both Japanese and English: “To remember the past is to commit oneself to the future.” Taiji Hajime, 77, a resident of Kumano town, Hiroshima Prefecture, who served as the head of the secretariat for the committee that erected the monument, looked back at that time and said, “Our desire to keep the Pope’s words alive bore fruit in the form of this monument.”

Donations for the monument came from citizens

The late Tomin Harada, who died in 1999, was a doctor who devoted himself to treating the A-bomb survivors and he became the chair of the committee. Other prominent figures in Hiroshima also became members of the committee, which was open to all faiths and included Sadako Kurihara, a poet known for her A-bomb-related work, and Kiyoshi Tanimoto, a Protestant priest at Hiroshima Nagarekawa Church. The committee appealed to the public to support the creation of the monument by conveying this vision: “The words spoken by the Pope are exactly aligned with the minds of the citizens of Hiroshima who fervently wish for a world at peace. It is our responsibility to permanently preserve his words for the future.” The committee managed to collect 5.5 million yen in donations, enabling the monument to be raised in 1983.

Mr. Hajime was involved in the committee’s efforts because he had previously assisted Mr. Harada’s initiative to help Vietnam War orphans. He is Protestant and did not experience the atomic bombing because he is originally from Kumamoto Prefecture. But he was one of the people in the crowd that filled the Peace Memorial Park on the day of the Pope’s visit, and was thrilled by his speech. “The Pope’s appeal was a universal message,” Mr. Hajime said, “so we were able to identify with it.”

A housewife first proposed the monument

The idea for the monument was first proposed by an A-bomb survivor, the late Yoshie Fujieda, who died in 2001 at the age of 83. Ms. Fujieda presented a lei of paper cranes to the Pope in seeking to convey the wishes of the A-bomb survivors. Mr. Hajime said, “Mr. Harada made significant contributions in expanding the committee’s efforts to establish the monument, but I think the earnest desire first expressed by Ms. Fujieda helped drive the project toward a successful outcome.” Of the 22 members of the committee, she was the only one who was simply listed as “a housewife” without a more formal title.

The bombing stole away the lives of Ms. Fujieda’s mother, Kimiyo, who was 51, her first son, Yotaro, who was four, and her second son, Tsuneo, who was two. All of them were at home in Sorazaya-cho (now part of Naka Ward). She made notes about her A-bomb experience in 1973, describing how she buried them at the ruins of her home. She wrote, “I gathered their remains at one place and buried them there. I covered them with soil that hadn’t been burned and buried the debris from their toys, too. Then I picked up a handful of red earth, wrapped it in paper, and carefully took it with me.”

Masakazu Fujieda, 71, is Ms. Fujieda’s son and he was born after the war. Now a resident of Saeki Ward, he said, “Conveying an antiwar message to others also gave my mother some motivation for her life.” Mr. Fujieda recalls how she talked about her A-bomb experience, again and again, and sought to convince him that the war should never have taken place. While busy with his work, he didn’t reflect much on her message, but he began to understand the urgency she felt after he got married, had a family of his own, then grew older. He continued, “Under no circumstances should people wage war. I hope the feelings my mother expressed will be handed down to young people.”

Ms. Fujieda’s wish is inscribed on the stone monument in the form of the Pope’s words. When Mr. Hajime guides a group of students on a school trip to A-bomb-related monuments, he always makes a point of visiting this monument. He said, “Everyone believed that these words should be firmly held in their minds. This sentiment will be understood by junior high and high school students, too.” Taking the opportunity of Pope Francis’s visit to Hiroshima in November, he hopes that the monument will again be in the spotlight for visitors to the city.