In the Footsteps of Pope Francis (Part 1): On behalf of A-bomb survivors, Pope Francis proclaims use of atomic energy for purposes of war to be “immoral” 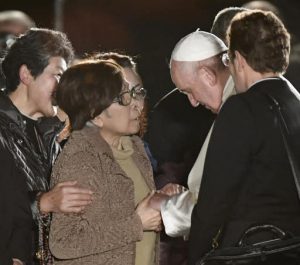 On November 24, Pope Francis visited the atomic bombed cities of Nagasaki, followed by Hiroshima. In a meeting held at the Hiroshima Peace Memorial Park, located in the city’s Naka Ward, the pope delivered a message in front of the Cenotaph for the A-bomb Victims, calling on all of humanity to act for the abolition of nuclear weapons. How did the citizens of the A-bombed Hiroshima react to the pope’s message? How should his message be used for development of a realistic nuclear-disarmament process? Herein, the Chugoku Shimbun considers the significance of the first papal visit to Japan in 38 years.

On the evening of November 24, Fumiko Kato, 89, a resident of Asaminami Ward, welcomed the pope in front of the Cenotaph as one of the A-bomb survivors invited to the gathering. “I am a Catholic A-bomb survivor and about to turn 90,” Ms. Kato said in English, tears flowing from her eyes. Pope Francis gently leaned his head against hers and cradled her shoulders.

Ms. Kato experienced the atomic bombing when she was a 15-year-old fourth-year student at Gion Girls High School. She survived the bombing at the Hiroshima Communications Bureau, about 1.4 kilometers from the hypocenter. But, more than 80 students and teachers from her school were killed, including friends who were mobilized to work at the Hiroshima Post Office, located almost directly under the blast. Baptized after the end of the war, she has continued to share her recollections of the atomic bombing with others. “I am obligated to convey my experience as someone whose life was spared.”

She felt compelled to communicate her experience based on words delivered by Pope John Paul II during his visit to Hiroshima in 1981. “War is the work of man,” he proclaimed. This time, during this second papal visit, Pope Francis declared the “use of atomic energy for purposes of war is today, more than ever, a crime.” Saying “his words empowered me,” Ms. Kato pledged she would live out the rest of her natural life in the service of her deceased friends.

Sharing their A-bomb experiences as a way to emphasize the illegality of nuclear weapons is something A-bomb survivors have long worked on. Domestically, in 1955, survivors filed an A-bomb lawsuit for compensation of damages against the Japanese government, arguing that by dropping the atomic bombs, the U.S. acted illegally. In 1963, while it rejected the claim for compensation, the Tokyo District Court ruled the U.S. atomic bombings had indeed violated international law.

Taking the side of the A-bomb survivors, Pope Francis directed at political leaders his words renouncing possession and use of nuclear weapons. “Nobody to this point has sent such a strong message,” said Haruko Moritaki, 80, co-chair of the citizen’s group Hiroshima Alliance for Nuclear Weapons Abolition (HANWA). She added, “I sensed his strong desire to lead the world on this issue.”

Current international circumstances, however, run counter to the appeals made by A-bomb survivors. For Ms. Moritaki, the pope’s message sounded like a challenge questioning whether sufficient effort had been made in the A-bombed city. “We shouldn’t conclude the pope’s visit by simple appreciation of his speaking on our behalf. He mentioned that future generations would rise to condemn our failure if we only spoke of peace and did not act to bring it about,” Ms. Moritaki said. “I wonder if we are up to accepting this profound challenge.”