In the Footsteps of Pope Francis (Part 2): Pope questions world leader attitudes as nuclear disarmament framework on verge of collapse 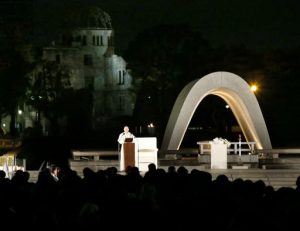 On November 24, Pope Francis visited Japan’s two A-bombed cities. In Nagasaki, the pope expressed a sense of crisis about a reemerging arms race. “There is a need to break down the climate of distrust that risks leading to a dismantling of the international arms control framework,” the pope said. In Hiroshima, he rejected the logic of nuclear deterrence. “How can we propose peace if we constantly invoke the threat of nuclear war as a legitimate recourse of the resolution for conflicts?” The pope thus indirectly called into question the leaders of the nuclear states such as the United States, as well as those of non-nuclear states including Japan that depend on a “nuclear umbrella.”

Successive popes have revealed their opposition to nuclear weapons, warning that a deterioration of international conditions could invite the use of such weapons. In 1963, during the Cold War, Pope John XXIII argued that nuclear weapons must be banned, given that the Cuban Missile Crisis in the previous year had nearly provoked nuclear war between the United States and the former Soviet Union. In 1981, Pope John Paul II visited Hiroshima and proclaimed, “To remember Hiroshima is to abhor nuclear war.”

“In his message this time, the pope took a much further step into international politics and raised the alarm,” said Saho Matsumoto, professor at Nagoya City University who specializes in international political history. Pope Francis used excerpts from Pope John XXIII’s encyclical (open letter) following the Cuban Missile Crisis, and according to Dr. Matsumoto, “It demonstrated his recognition that if the current situation were to be left alone, it might lead to another crisis.”

When the pope referred to “the international arms control framework,” he seemed to be conscious specifically of next year’s scheduled Nuclear Non-Proliferation Treaty (NPT) Review Conference, which is held every five years. The NPT framework, established in 1970 with participation by the nuclear states, has ever since provided a platform for dialogue among the signatories. The world is now at a crossroads that will determine whether or not the framework can be maintained.

The last NPT meeting, held in 2015, broke down over the concept of establishing a “Middle East weapons of mass destruction free zone.” In 2017, the Treaty on the Prohibition of Nuclear Weapons (TPNW) was adopted by the United Nations. However, conflicts between pro-treaty nations that do not possess nuclear arsenals, and the nuclear states and their allies have yet to be resolved. Prospects therefore remain uncertain about the success of the next NPT Review Conference, in 2020.

Under such circumstances, a single message by the pope will not likely bring about positive change. But, Vatican City, of which the pope serves as sovereign, has unique connections and influence in the international community. The city-state mediated restoration of diplomatic ties between the United States and Cuba, for example, and in 1979 intervened to resolve the hostage crisis at the U.S. Embassy in Iran. “There is a possibility that the Vatican might play the role of mediator between opposing nations at the NPT Review Conference. It could be a key player there,” Dr. Matsumoto said.

The Japanese government’s stance is unchanged toward the pope’s visit to Japan and his call for action on the elimination of nuclear weapons. Prime Minister Shinzo Abe met with the Pope November 25 and said, “As the only A-bombed nation, we have a mission to take the lead on international efforts to realize a world without nuclear weapons.” He added that Japan would “serve as a bridge” between nuclear and non-nuclear states. The prime minister, however, failed to mention concrete measures toward achieving that goal.

Toshiyuki Mimaki, 77, acting chair of the Hiroshima Prefectural Confederation of A-bomb Sufferers Organizations (chaired by Sunao Tsuboi), simply sighed. “The Japanese government always says that.” Mr. Mimaki plans to visit the U.S. and attend the NPT Review Conference. He is still pondering language he will use to convey the horror of the atomic bombings at the conference. “Hibakusha can play the role of recounting their memories to the world. But there is still something only nations can do.” With that in mind, he urged governments to come up with results that can respond to the moral questions posed by Pope Francis.