How to send messages from Hiroshima as city marks 74th year since A-bombing, Part 3 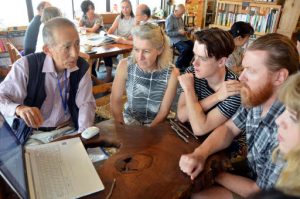 Part 3: Visitors to Hiroshima sit close to A-bomb survivors and listen to their A-bomb experiences in cafe

“My father was in the navy and he died in the hospital he was taken to, six days after the atomic bombing,” said So Horie, 78, in English. Mr. Horie, a resident of Saeki Ward, was speaking in a cafe called Hachidori-sha, located not far from the Peace Memorial Park in Naka Ward, Hiroshima. On July 6, Mr. Horie shared his A-bomb account with five international visitors, sitting shoulder to shoulder at the table. He spent about two hours explaining the hardships he endured as a result of the atomic bomb: his father was killed in the bombing and his siblings died after the war due to cancer.

“The days of six”

Hachidori-sha invites A-bomb survivors to speak at the cafe on “the days of six” each month: the 6th, the 16th, and the 26th. Guests can listen to A-bomb accounts in a relaxed atmosphere and dialogue between the survivors and the guests sometimes goes on for hours. Although the events are not intended only for international visitors, the cafe is welcoming an increasing number of such visitors in connection with the rise in foreign tourists to Japan and favorable word of mouth. Discussions beyond national boundaries have become a familiar sight here.

On July 6, four A-bomb survivors, including Mr. Horie, welcomed the guests to the cafe. Jenna Hudson, 24, an English teacher from Hong Kong, said, “I’ve wanted to visit Hiroshima to learn about the atomic bombing from the point of view of the local people. Through the heavy conversation we had with the survivor, I could feel the vivid reality of his experience.”

Erika Abiko, 40, is the owner of Hachidori-sha. She explains, “I established ‘the days of six’ because I wanted people to become friends with A-bomb survivors. If people realize that the catastrophe really happened to their friend, they’ll no longer feel that it’s ‘a thing in the distant past’.” This is what Ms. Abiko learned as she deepened her friendships with A-bomb survivors that she met during a voyage organized by Peace Boat, a Tokyo-based non-governmental organization (NGO), in 2008.

A-bomb survivors who sympathize with Ms. Abiko’s efforts gather at Hachidori-sha. Mr. Horie was four years old when he experienced the atomic bombing while at Koiuemachi (now part of Nishi Ward) with his sister Keiko, then 15. His father, Ryusuke, then 46, was a captain in the navy and was in Otemachi (now part of Naka Ward), near the hypocenter, at the time of the bombing. He was carried to the naval hospital in Iwakuni but died there. Several decades later, his sister, who quickly protected Mr. Horie from the bomb, passed away at the age of 55. His brother, Yu, who was 18 at the time of the bombing and searched for their father in the ruins, also died at the age of 63. Both siblings suffered from cancer.

Mr. Horie did not speak about his experience for many years, thinking there were people who went through more painful experiences than he did. However, after the 60th anniversary of the atomic bombing, he began to feel that the number of those who know about what happened back then is declining. Around the same time, he was invited to share his A-bomb account in English to international visitors at the World Friendship Center, a non-profit organization (NPO) in Nishi Ward, where he was learning English for pleasure.

Topics are added depending on the country of his listeners

As Mr. Horie has spoken about the sights he saw through a boy’s eyes, like the pattern of a kimono scorched into a girl’s skin or a playground at a school where bodies were being cremated, his sense of mission as a witness has steadily grown. At first, he relied on the translation of his talk in English. Now he is able to modify the contents himself by adding topics, such as the arms industry or nuclear accidents, depending on the country of his listeners.

Even while battling illness, he continues to speak about his A-bomb experience. He said, “I can speak twice as much without a translator. Visitors from abroad actively ask questions when we have a heart-to-heart talk.” The positive response from his listeners has motivated him to continue these dialogues.

Many of the visitors to Hiroshima come from the United States, the nuclear superpower that carried out the A-bomb attacks, and U.S. allies. Since the cafe opened in July 2017, Ms. Abiko has not canceled a single day of “the days of six” gatherings. To date, around 1,000 people have taken part. She said with conviction, “The atomic bomb is not only Hiroshima’s problem, it’s an issue that all of humanity must deal with. I’d like more and more people to sympathize with this point of view and take action to abolish nuclear weapons.”