How to send messages from Hiroshima as city marks 74th year since A-bombing, Part 4 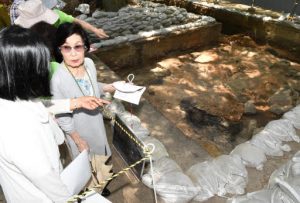 Part 4: Unearthed remains of atomic bombing serve as “witnesses” to life at that time

On July 7, Miyoko Doi, 89, a resident of Asakita Ward, saw A-bombed remains of the former Nakajima district, including charred and carbonized tatami mats and a crumbled mud wall turned reddish-brown. The City of Hiroshima is now pursuing excavation work in the former district which is now the location of the Hiroshima Peace Memorial Park. Ms. Doi said, “I want the city to tell people about the neighborhood that was once in this place.” She gazed at traces of her former neighbor’s house, laying 60 to 90 centimeters in the ground.

4,400 people lived in the district

The atomic bombing, carried out by the United States, destroyed and incinerated practically the entire area within a two-kilometer radius of the hypocenter. It is said that the former Nakajima district, most of which was located within 500 meters of the hypocenter, was lined with many homes and shops and had a population of about 4,400 people. Excavation work is now underway in the former Tenjin-machi-suji area, located on the north side of the east building of the Peace Memorial Museum. Ms. Doi’s home once stood at 78 Zaimoku-cho, several doors down from the Tenjin-machi-suji area to the west.

On the same day, a gathering was held by a citizens’ group seeking to preserve the A-bombed remains that lie beneath the Hiroshima Peace Memorial Park. At the gathering, Ms. Doi talked about what her former neighborhood and her family were like before and after the bombing. She shared her memories of the site, recounting such things as “There was a restaurant that served issen-yoshoku (the old type of okonomiyaki)” and “I went to a public bath near my house.”

Then came August 6, 1945. Ms. Doi was then a second-year student at Hiroshima Girls Commercial School. As she had been mobilized to work at Fukuya Department Store, which was located 710 meters from the hypocenter, she narrowly escaped death. But five members of her family — her 37-year-old mother, Yoshiko Miyoshi; her younger sisters Tokiko, 13, Hiroko, 6, and Misao, 3; and her younger brother Shigeharu, 9 — were all killed in the bombing.

Ms. Doi said, “I don’t want anything sad like this to ever happen again.” The late Shigeru Miyoshi, Ms. Doi’s father, identified his wife’s remains, still wearing her belly-warmer tie, in the ruins of his home. His wife was in the last month of her pregnancy. Ms. Doi showed the audience an A-bomb picture that was drawn by her father while he was still alive to depict his memory of the moment he found his wife lying in the ruins. Some participants covered their eyes with their hands.

After reaching her late 80s, she sometimes turns down requests to share her A-bomb experience. But she decided to speak at the gathering because she hopes to support the effort to utilize the A-bombed remains of the district. Shunsuke Taga, 69, the head of the group, said, “I want to tell people that the area where Peace Memorial Park is now wasn’t a park before the bombing. In fact, many people lived in this place and were leading lives as individuals.” The remains that lie beneath this site will serve as witnesses to the atomic bombing.

Meanwhile, some former residents of the district also raised concerns about the remains during the gathering, saying, “The remains that have been excavated so far haven’t given others enough sense of the former residents’ lives.” The unearthed site is believed to be near a lumber shop that was run by the parents of Shizuko Kato, who was then 15, and in the same grade as Ms. Doi. The acquaintance of Ms. Doi’s died in the bombing. But nothing has yet been found to directly indicate that the shop was at this site.

Concern about deterioration of artifacts

The city is planning to begin displaying these remains to the public on a regular basis starting in fiscal 2020. So far, work to investigate and excavate an area of about 25 square meters has been performed. In the future, the scope of the excavation will be expanded by about 25 square meters to the east from the current remains. When an approximately 2,100 square meter site was dug out by March 2017, in connection with anti-seismic reinforcement work for the museum’s main building, many items were unearthed, including charred rice paddles and the tiles of a public bath. Thus, some former residents of the district are hoping that the excavation effort of the area can be expanded further. But the city has asked for their understanding about the current plan, arguing that the excavation work needs to proceed while maintaining the aesthetic aspect of the park, considered a national scenic spot.

On July 7, the city’s advisory panel offered opinions about the excavation and the use of the A-bombed remains. Masayuki Miura, the chair of the panel and an honorary professor at Hiroshima University who specializes in architectural history, pointed out the risk of deterioration to the excavation site that is unearthed. It was proposed that the minimum level of excavation be carried out to prepare for the public display by 2020, and discussion take place to determine if the excavation should be widened afterwards by evaluating the impact of the remains in terms of conveying its message to the world.

It is presumed that the remains were kept intact beneath the ground because soil was added to cover the burnt-out site after the end of the war to develop the Peace Memorial Park. On one hand, the landscape of the park is well known around the world, but on the other hand, the remains of the former urban area are preserved underground. It is time to engage in more thorough discussions with citizens and experts on the ideal state of the park in order to enhance its ability to more strongly convey the reality of the atomic bombing.

Plan to display the A-bombed remains of the former Nakajima district
This plan was developed by the City of Hiroshima to convey the lives of the people who lived in the former Nakajima district (where the Peace Memorial Park is now located in Naka Ward) before the A-bomb attack by the United States and the resulting devastation. With the goal of opening the site to the public from fiscal year 2020, the 75th anniversary of the bomb, excavation work is now underway on the north side of the Peace Memorial Museum’s east building to prepare for this public display. After an observation tour of the site was conducted on July 7, the area was backfilled for the Peace Memorial Ceremony on August 6. The site will be excavated again after the ceremony.