How to send messages from Hiroshima as city marks 74th year since A-bombing, Part 5 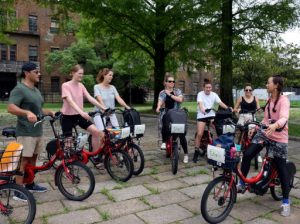 “Participants in the ‘Sokoiko!’ tour, please follow me to the next spot.” A group of foreign tourists who were on power-assisted bicycles responded to this instruction from their guide and began cycling south along the riverbank in single file. The tour participants moved farther and farther away from the Hiroshima Peace Memorial Park, in Naka Ward, as they headed toward traces of the atomic bombing found in other parts of the city.

They stopped at the west end of Miyuki Bridge, which is about 2.2 kilometers southeast of the hypocenter. This is where the late Yoshito Matsushige, a photographer for the Chugoku Shimbun at that time, took photos of the devastation shortly after the A-bomb blast. Roger Olanssen, 66, a visitor from Norway who joined the tour on July 3, said, “This is helping me grasp the extent of the damage, how large the area is.” The group then went north along the Kyobashi River to take in an A-bombed tree.

The “Sokoiko!” cycling tours were begun three years ago by a company in the city and are conducted by advance reservation only. The tours start and end at Hiroshima Station, using rented bicycles available from “Peacecle,” a bike sharing service run by the city. The main “Peace Tour” visits about 10 locations over a duration of three hours, but the Hiroshima Peace Memorial Museum, a popular sightseeing spot, is not included in this tour with the hope that people will go to the museum on their own. Satoshi Ishitobi, 39, the president of the tour operator, said with conviction, “I want to show people symbols of both the suffering and the recovery of the city, even if they’re some distance away from the park.”

After working for an apparel company outside the prefecture, Mr. Ishitobi returned to Hiroshima wanting to contribute to his hometown through his work. The idea of organizing tours came when he showed foreign friends of an acquaintance around the city, who enjoyed seeing the townscape. He planned the tour route carefully, based on the historical facts he studied, and set the fee for the tour at 6,500 yen per person. Thanks to glowing reviews on a leading travel site, about 100 people, mainly from Europe and the United States, joined his tours each month this spring. This is five times the number of participants he had during the same period last year.

Mr. Ishitobi assessed the situation by saying, “There is a growing need for international visitors to learn about the atomic bombing more deeply by spending reasonable time and money in Hiroshima, where they’ve come all the way from overseas.” At the same time, he feels that the “Peace Memorial City” has not made full use of the things, particularly A-bombed buildings, that could convey the catastrophic consequences of the atomic bombing.

For instance, the city has decided to suspend opportunities for the public to go inside the ruins of the Chugoku Military District Headquarters (the former air defense operations room) in Naka Ward, due to the deterioration of this site. This was one of the spots on Mr. Ishitobi’s tour, and there is no prospect of opening the inside to the building to the public again. The participants would listen carefully when a guide explained, “This is the place where the first message about the atomic bombing of Hiroshima was transmitted to others outside the city.” Mr. Ishitobi expressed regret, saying, “If people could see this site, their experience would be even richer.”

Discussions on how to utilize the former Hiroshima University Science Faculty No. 1 Building in Naka Ward, another spot on the tour route, are still under way. People can only look at the outside of the building. Tour groups also sometimes visit the former Army Clothing Depot in Minami Ward by request. The facility, which is maintained by Hiroshima Prefecture, became the base for rescue efforts after the bombing. It is usually closed to the public.

The City of Hiroshima formed a council to promote “Peace Tourism” two years ago. Based on this body’s discussions, the city has begun to pursue some concrete initiatives. For example, Honkawa Elementary School Peace Museum, in Naka Ward, which makes use of a portion of the A-bombed school building as a museum, is now open every day, including weekends and holidays. The city’s Tourism Department said, “We will listen to what the public thinks and work together with other departments in charge of the use of the A-bombed buildings as effectively as we can.”

Mr. Ishitobi also lent his support to the council by offering a variety of suggestions, such as viewing reproduced images of the interior of A-bombed buildings after the bombing by using a virtual reality (VR) device in the building. He hopes that city administrators understand the issues and measures, which the private sector has raised in the field, and respond flexibly at a speedier pace in order to make full use of the A-bombed sites that lie outside the Peace Memorial Park.

A-bombed buildings
The City of Hiroshima registers A-bombed buildings that stand within a five-kilometer radius of the hypocenter and provides financial assistance for costs involving the preservation of these sites. Currently, a total of 85 facilities are on the list, of which 21 are owned by the national, prefectural, or municipal government, and 64 are privately owned. Hiroshima University and Hiroshima City University have agreed to relocate their peace-related programs to the former Hiroshima University Science Faculty No. 1 Building, which is owned by the city.