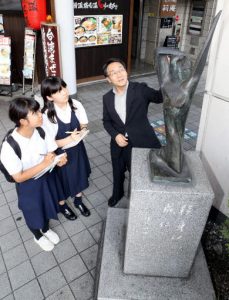 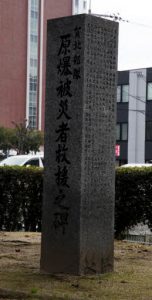 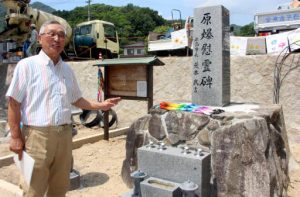 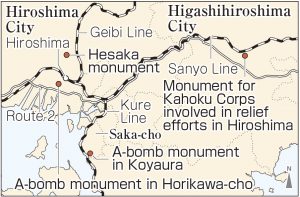 There are many monuments in and around the Hiroshima Peace Memorial Park, in Naka Ward, intended to comfort the souls of the A-bomb victims. Tourists and students on school trips can frequently be seen visiting them on foot. In addition, there are a number of monuments that stand quietly in locations farther away from the park. What is their connection to the atomic bombing? The junior writers of the Chugoku Shimbun visited four such monuments, located in Hiroshima Prefecture, and talked to people who live near the monuments and researched their historical background. Through these activities, we have come to understand the relationship between the monuments and their locations, as well as the strong desire for peace that people have imbued in them.


Statue pointing to the sky above the hypocenter
A-bomb monument in Horikawa-cho (Shintenchi, Naka Ward, Hiroshima)

Along Chuo Street in Naka Ward, Hiroshima stands a bronze statue of a human-like figure pointing to the sky in the direction of the hypocenter. The monument is located in Horikawa-cho.

The junior writers spoke with Toshiyuki Ikunaga, 68, the owner of a nearby photo studio, about the monument. Mr. Ikunaga told us that the monument was created by his father, Ryozo, an A-bomb survivor, and his neighbors in 1957. Horikawa-cho has long been a busy shopping district and was so before the atomic bombing of Hiroshima. The area was only about 750 meters from the hypocenter, and 185 people there were killed by the bomb.

“Almost all the homes and shops were burned down by the atomic bomb. It is said that, after the inferno eventually subsided, the island of Ninoshima could be seen, about five kilometers to the south,” Mr. Ikunaga said. Until recently, people from the neighborhood held a memorial service every year on August 6. But now that the family members of the A-bomb victims have grown older, Mr. Ikunaga, who serves as the chairman of the neighborhood association, just cleans up the area around the monument with other residents, rather than holding a memorial service.

There are only a few people familiar with the details of the monument these days. One day Mr. Ikunaga saw someone sitting on the base of the statue, as if it were a bench, which made him sad. He said, “It’s true that this monument is hard to recognize, but I hope that people will treat this monument and the A-bomb-related monuments in their neighborhood with care, imagining and thinking about the sorrow and grief of the people of the A-bombed city of Hiroshima.”


Standing quietly in one corner of a cemetery
A-bomb monument in Hesaka (Hesaka-Sakuraue-machi, Higashi Ward, Hiroshima)

When we visited one corner of a municipal cemetery, located about five kilometers to the north of the hypocenter, we found a monument standing quietly and inscribed with the words “A-bomb monument.” According to a newspaper article published in the past, many people used to visit the monument to pray and offer flowers and candles. However, only a few people visit the monument now.

We researched the background behind the monument with the help of a reference book titled A Record of Hesaka-cho, which was published in 1977. According to the book, a branch of the army hospital was temporarily established at Hesaka National School (now Hesaka Elementary School) in the aftermath of the atomic bombing, and many injured people were taken in at this relief station.

Around 600 people reportedly died there and were subsequently cremated. About two months after the bombing, survivors buried the ashes of the dead at a nearby mountain, and raised this monument. In 1959, the ashes were transferred to the Atomic Bomb Memorial Mound in the Peace Memorial Park, and in 1995 the stone monument was moved to its current location due to a residential housing complex construction project.

The monument seems to be making a quiet appeal to the world not to repeat the tragedy wrought by the atomic bombing.

On August 6, 1945, many people went into the central part of Hiroshima from the outskirts of the city to engage in relief efforts amid the A-bomb devastation. Some of them were members of a group of around 250 people known as the Kahoka Corps. The Kahoka Corps was a homeland defense group comprised of young people between the ages of 19 and 23. They resided in present-day Higashihiroshima City and their job was to be prepared should the U.S. military invade the Japanese mainland.

From August 7 to 13, these young people provided medical treatment for the injured and cremated dead bodies around Hiroshima Castle where military facilities were located. After they returned home, many of them suffered from diarrhea and hair loss, and some died.

In August 1987, remaining former corps members raised a monument in Saijo Chuo Koen (Saijo Central Park) in Higashihiroshima City. Recently, the monument was temporarily removed due to the start of construction work for a new museum in the neighborhood, but it will eventually be relocated to another part of the park.

Shigeo Ito, 89, who is part of Higashihiroshima City’s A-bomb-related materials preservation promotion council, said, “I’d like to tell the story of the corps to younger generations so they can learn about how hard the corps members worked despite their exposure to the A-bomb’s radiation.” When we study about the damage caused by the atomic bomb, we should expand our awareness beyond the city of Hiroshima itself.

In July 2018, the Koyaura district of Saka-cho was hit hard by heavy rain that struck western Japan. An A-bomb monument that was located on a hillside beside the JR Kure train line was buried by dirt and uprooted trees from a landslide.

On July 6, exactly one year after that torrential rain, the junior writers visited the Koyaura district. The monument has since been relocated to Koyaura Park in an area where restoration work is under way. Following the heavy rain, some 70 residents formed a group to protect the A-bomb monument and ensure that it would be passed on to future generations.

According to Toshiki Nishitani, 73, the head of the group, about 360 injured people were carried from Ujina (present-day Minami Ward, Hiroshima) to Koyaura by ship in the aftermath of the Hiroshima bombing, but about half of them died and their remains were buried. A wooden column was made to mark the burial site, but it was replaced with a stone monument in 1987 and the names of 93 people whose identities were known were inscribed on the stone.

On August 6, this year’s memorial ceremony will be held at a new location. Mr. Nishitani said, “The monument conveys to us the cruelty of nuclear weapons. I hope that this monument can serve as a catalyst to draw the attention of young people to the damage caused by the atomic bomb.”