How to send messages from Hiroshima as city marks 74th year since A-bombing, Part 6 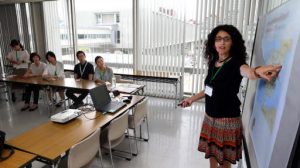 The number of Spanish cities that have joined Mayors for Peace, which is led by the cities of Hiroshima and Nagasaki, now totals 391. In mid-July at the International Conference Center Hiroshima in Naka Ward, Eulalia Carrillo, 50, a Barcelona Province government employee who is responsible for assisting all these municipalities, said, “The key to building peace lies in the hands of local governments which have responsibility for the peace and human rights of their citizens.” The staff of the Hiroshima Peace Culture Foundation, which serves as the secretariat for Mayors for Peace, nodded in agreement.

The current president of Mayors for Peace is Hiroshima Mayor Kazumi Matsui, and a total of 7,772 cities from 163 countries and regions are members of the organization. To communicate and confirm the direction of its activities, the secretariat has taken in one to seven interns a year since fiscal year 2014, and Ms. Carrillo is one of them.

Each member city is said to be actively working toward passing a resolution of support for the Treaty on the Prohibition of Nuclear Weapons and participating in international conferences. This past March, Mayors of Peace cities held a symposium that focused on the ongoing conflicts in Syria. Against the disturbing backdrop in Europe where there is a backlash against refugees, member cities encouraged refugees and influential figures to adopt a declaration that declares solidarity with victims of regional conflicts.

In Spain, the memories of such atrocities as the aerial bombing of Guernica during the Spanish Civil War (1936 - 1939), remain in the minds of people in various parts of the country. However, since Spanish cities have begun to be involved in Mayors for Peace, peace-related activities have spread. Ms. Carrillo stresses the importance of their participation, saying, “If people want peace in the world, they first have to resolve the conflicts around them and ensure that the lives of the citizens remain as peaceful as possible.”

The activities and efforts of the member cities have grown more diverse, such as, in Iran, handing down the memories of damage caused by toxic gas used in the Iran-Iraq War, and, in Mexico, a project to remove firearms from the public and dispose of them. The Mayors of Peace secretariat commented, “While respecting the efforts made by each member city to tackle the problems that make it difficult to realize peace, we would like to stayed focused on our main aim of achieving the abolition of nuclear weapons, together with all of the member cities.”

In October 2003, before its name was changed, Mayors for Peace clearly stated its objective of “aiming for the abolition of nuclear weapons by 2020” in its 2020 Vision. At the third Preparatory Committee for the 2020 Nuclear Non-Proliferation Treaty (NPT) Review Conference, held in New York this past spring, both Hiroshima Mayor Kazumi Matsui and Nagasaki Mayor Tomihisa Taue delivered speeches in the assembly hall. They also met with representatives from the United Kingdom and other nuclear weapon states and called on them to move forward with efforts for nuclear disarmament. Mayors for Peace also issued a joint appeal calling on all U.N. member states to change their approach from confrontation to collaboration and cooperation.

We are faced with a bitter reality regarding the state of nuclear weapons. At the assembly hall, there was not only conflict over the nuclear weapons ban treaty, but also conflict between the nuclear superpowers themselves, with the United States and Russia sharply criticizing one another. Such disputes continue without paying attention to citizens. Yasuhito Fukui, an associate professor at Hiroshima City University and a specialist in nuclear disarmament under international law, observed these discussions and feels that it isn’t easy for civil society to influence international politics, given the fact that the nuclear weapon states are reluctant to even pursue the conventional step-by-step approach to the reduction of nuclear arms.

Role of people to move government

Although Japan is the only country to have experienced atomic attack, the Japanese government remains opposed to supporting the nuclear weapons ban treaty. Mr. Fukui, a former bureaucrat in the foreign ministry, mentioned the ministry, which is not easily inclined to change its position on issues, and said, “When I looked at the belongings of the A-bomb victims on display at the Peace Memorial Museum, I began to grasp the danger of nuclear weapons more keenly. Hiroshima has something that can move people’s hearts, and it’s important to delve into the reality after the atomic bombing painstakingly and convey the findings to the rest of the world.” Mr. Fukui believes that the A-bombed city must stay persistent in its efforts to send out its appeals.

At the Preparatory Committee for the NPT Review Conference, Mr. Matsui asked Dell Higgie, New Zealand’s Ambassador for Disarmament, to press the Japanese government to support the nuclear weapons ban treaty. Ms. Higgie replied, “It is the role of the Japanese people to move its government.” Mayors for Peace, with the support of 7,772 cities worldwide, is thus highlighting the challenges that the citizens of Hiroshima face.

Mayors for Peace
Mayors for Peace is an alliance of cities working toward the abolition of nuclear weapons. It developed out of “The World Conference of Mayors for Peace through Inter-City Solidarity” which was established in 1982 in response to a proposal from the mayors of Hiroshima and Nagasaki. In 2001, the name was changed to Mayors for Peace, and in 2013, the Japanese name of the organization was altered. In its action plan, which was formulated in 2017, the organization added the phrase “Realization of safe and resilient cities” as another pillar of its activities. The mayor of Hiroshima serves as president, while the mayors of 14 cities, including Nagasaki, serve as vice presidents. As of July 1, 2019, Mayors for Peace is comprised of 7,772 municipalities from 163 countries and regions (the number of Japanese municipalities is 1,732).