How to send messages from Hiroshima as city marks 74th year since A-bombing, Part 7 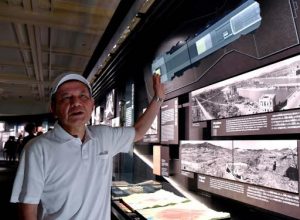 Part 7: “Memory keepers” are determined to hand down the survivors’ experiences

On July 31, Takanori Mizuno, 61, a resident of Asakita Ward, Hiroshima, will present the A-bomb testimony of Hiromi Hasai, an A-bomb survivor and nuclear physicist, at the east building of the Hiroshima Peace Memorial Museum in Naka Ward. It is Mr. Mizuno’s first presentation of Mr. Hasai’s A-bomb testimony. Mr. Mizuno is an “A-bomb Legacy Successor,” a volunteer who inherits and hands down the experiences of A-bomb survivors. Mr. Hasai, who passed away in January at the age of 87, used to say, “I will speak for myself while I’m still alive,” and did not directly ask that Mr. Mizuno speak for him. “For a while I couldn’t come to terms with his death. But six months have passed and I feel that I have to start now,” Mr. Mizuno said with a nervous look.

“Memory keepers” undergo a three-year period of training by the City of Hiroshima and inherit the memories passed on by A-bomb survivors who are assigned by the city. Mr. Mizuno heard about the horrific sights, such as scores of bodies and people with severe burns, from Mr. Hasai, who entered the city center to return home the day after the atomic bombing. He has also learned about the inhumane nature of nuclear weapons from a scientific point of view.

Mr. Mizuno feels that at the core of Mr. Hasai’s thoughts is “anger.” Therefore, he included this straightforward question in his manuscript for the presentation: “Why did the atomic bomb have to be dropped on human beings?” Relating the words of hatred toward the United States that Mr. Hasai had heard from others in the aftermath of the atomic bombing, Mr. Mizuno will convey the desire that Mr. Hasai had when he was alive: “Building peace is difficult. That’s why I hope you will think together, and talk together, with a wide variety of people.”

Mr. Mizuno has also reflected on Mr. Hasai’s request not to emphasize his career as a nuclear physicist. He said, “Mr. Hasai may have felt that the important thing is to focus on the hardships that ordinary citizens were forced to endure.” He also plans to talk about the feelings of his own mother, Akiko, who is 86.

On the day of the atomic bombing, Akiko’s mother, who was Mr. Mizuno’s grandmother, was out in the city to help tear down buildings to create a fire lane. Her remains were never found. Akiko once expressed her frustration to her son, saying, “I’m feeling deep chagrin.” She now lives in Kurakake Nozomi-en, a special nursing home for A-bomb survivors in Asakita Ward. In his presentations as a “memory keeper,” Mr. Mizuno tries to convey the feelings of those who are unable to share their tragic experiences.

As of the end of March, the average age of the A-bomb survivors is now 82.65. The “memory keepers” are seeking to have their listeners understand the true nature of the atomic bombing in greater depth by also taking in the perspective of people who have been close to them and incorporating this information in their presentations. The museum’s Outreach Division said, “Listening to the stories of people who have been close to ‘the memory keepers’ helps them to convey their determination to hand down the survivors’ testimonies.”

Former residents of the former Nakajima district, an area annihilated by the bomb that is now part of the Peace Memorial Park, have been sharing their accounts, but they are aging. Ryoga Suwa, whose home was at a temple in the district, used to share his experience of losing his parents and his sister in the atomic bombing, but he passed away in March at the age of 85. Kanji Yamasaki, a former resident of the former Tenjin-machi district, who had long spoken out about his experience, also died in June at the age of 91.

Everyday lives before the bombing

With the survivors growing old, urgent efforts must be made to locate those who can still share their A-bomb account and are willing to have their testimony recorded. A citizens’ group called the Hiroshima Field Work Execution Committee has held a meeting every year since 2003 to hear the experiences of the former residents of the Nakajima district. This year, the meeting was held on July 20 in Naka Ward.

About 60 people attended the gathering to hear the experience of a former resident who said, “My relative owned a confectionery shop where they were making momiji manju (small cakes shaped like a maple leaf).” Some of those in attendance were from other prefectures, such as Miyagi and Kagoshima, amid rising interest in this Hiroshima neighborhood thanks to the popular animated film “In This Corner of the World.”

Scenes of daily life in the district before the bombing may not be special, but they can help convey the damage caused by the A-bomb attack more vividly. Mikio Nakagawa, 60, a representative of the committee and a resident of Minami Ward, said with conviction, “As long as there are survivors who are able to share their memories, I would like to continue listening to them.”

A-bomb Legacy Successor
With the A-bomb survivors aging, the City of Hiroshima initiated this program to inherit and hand down the survivors’ testimonies in fiscal 2012. Those who apply to become a “memory keeper” undergo a three-year training program in which they learn about the various kinds of damage caused by the atomic bombing and hear A-bomb experiences from individual survivors. Currently, 131 people have been commissioned by the city to serve as “memory keepers.” Last fiscal year, the Japanese government began to subsidize the costs of dispatching “memory keepers” to places outside the city of Hiroshima. During this period, “memory keepers” presented A-bomb testimonies at 273 elementary schools and junior high schools in 38 prefectures in Japan, the United Kingdom, and Costa Rica.