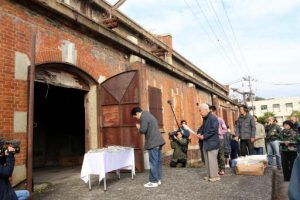 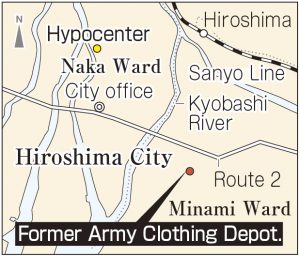 At the meeting, Taiki Adachi, Hiroshima Prefecture’s Property Administration Division manager, explained its plan to preserve the outer appearance of building No. 1, and to demolish and remove buildings No. 2 and No. 3. Building No. 1 is closest to the A-bomb hypocenter. He asked participants for their understanding of the plan by saying, “This plan is based on current prefectural policies. As the safety issues relating to these buildings must be handled urgently, we’re going to preserve the building properly and use it in a positive manner in recognition of the significance of the former Clothing Depot.” He also said the final direction would be decided in February of 2020.

During the discussion, there were questions about the feasibility of the buildings’ gratuitous conveyance to Hiroshima City and how to deal with building No. 4, which is now managed by the Chugoku Financial Bureau. In response to an interview by the Chugoku Shimbun, a city employee in charge said, “The city cannot take over the building because it has no concrete plan as to how to use it,” while the Chugoku Financial Bureau said, “We will examine in detail how to handle the building, including the demolition and removal options.”

According to the prefecture’s original plan, building No. 1 whose outer appearance is to be preserved, will have its west-side external wall reinforced so it will not cause damage to private houses nearby in the event of an earthquake registering above a six on the Japanese seismic scale. Its roof will also be modified and repaired. With respect to the demolition work of buildings No. 2 and No. 3, it is expected to take about two years to complete due to the difficulty to secure the place for demolition as well as the necessity of careful work to prevent collapse of the buildings.

The Hiroshima Prefectural government will consider how to utilize preserved building No. 1, and the site from which the other two buildings will be removed, in collaboration with the national government and Hiroshima City. There is a possibility the interior of building No. 1 will be earthquake-proofed. In that case, the prefecture is considering an optional plan that would utilize the site of the two other buildings as a parking lot to create an environment for accepting visitors.

In September, Hiroshima Prefecture announced it would take measures to ensure the safety of these buildings, as they have deteriorated with age and are in danger of collapsing in the event of an earthquake. In October, the prefecture publicized six different plans that included earthquake-proofing, demolition, and exterior preservation for the buildings. This plan, presented to the prefectural assembly’s committee meeting on December 4, is one of these six plans.

Former Army Clothing Depot
The former Army Clothing Depot was used to manufacture clothing and footwear for the former Japanese Army. It was built in 1913 and is located 2.7 km southeast of the hypocenter. It once consisted of 13 warehouses, but now four buildings stand in an L-shaped configuration. Hiroshima Prefecture owns the buildings No. 1 to No. 3 and building No. 4 is owned by the national government. The four buildings are three stories high and made of reinforced concrete and bricks. Buildings No. 1 to No. 3 have a total floor space of 5,578 square meters each, and building No. 4 has a total floor space of 4,985 square meters.