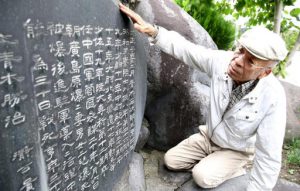 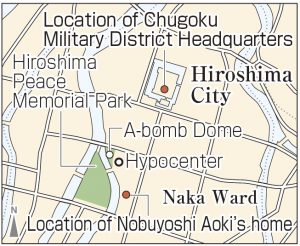 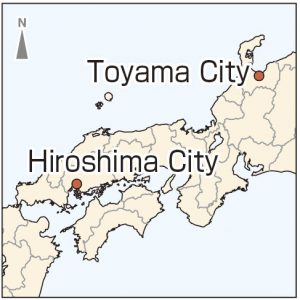 Family not officially registered as victims for more than 70 years

I left Hiroshima for the Hokuriku district, located in north central Honshu, on a Shinkansen bullet train. I then took an express train to JR Toyama Station. From there my destination was a 15-minute drive. In the twilight of the evening I came across a memorial monument on the grounds of a private home in a quiet residential area. The monument read: “His wife, infant daughter, and infant son lost their lives in the Hiroshima atomic bombing.” And engraved in the stone are the names of Nobuyoshi Aoki, who died as a result of the atomic bombing at the age of 32, his wife, and their two children.

No registration but Nobuyoshi

Though the three members of Nobuyoshi’s family, as well as a relative, lost their lives, a survey conducted by the Hiroshima municipal government registered only Nobuyoshi as an A-bomb victim. I found out this fact and visited Toyama to learn about them.

I was greeted by Hisayuki Aoki, 73, Nobuyoshi’s nephew. The monument was erected some 40 years ago by his late father, Katsuji, to mourn his brother and his family. In line with Katsuji’s wishes, Hisayuki, who was born after the war, has been maintaining the monument. As Katsuji did not want to recall that tragic event, he refrained from telling Hisayuki much about Nobuyoshi’s family.

“My father only said that he was ‘an outstanding boy, and I was proud of him.’ I believe the monument represents my father’s feelings. He wanted to keep their names on it,” he said, touching the monument with his hand as if stroking it.

Nobuyoshi was born into a farming family in the city of Toyama and was raised there. After graduating from junior high school under the prewar education system, he decided to became a soldier. He graduated from the Military Staff College in Tokyo in March 1944, then was assigned to a post in Hiroshima and moved to Otemachi 3-chome, Hiroshima (now Otemachi 2-chome, Naka Ward) with his wife and daughter.

Area around his home was completely destroyed

On the morning of August 6, 1945, his wife Fumi, then 28, and her sister Tamae Edamoto, then 26, were at their house. Nobuyoshi had left for the Chugoku Military District Headquarters located on the grounds of Hiroshima Castle. It is believed that Tamae was doing the laundry.

Then the atomic bomb, dropped from a U.S. plane, exploded in the sky above the city. The area around their house, which was located about 300 meters from the hypocenter, was completely destroyed. Four people, including his four-year-old daughter Yoshimi and nine-month-old son Nobumi, died at their house.

Nobuyoshi’s colleague, the late Shuetsu Matsumura, spent some time with Nobuyoshi after the atomic bombing. According to Mr. Matsumura’s diary, Nobuyoshi gathered up the bones of his wife, sister-in-law, and daughter at the site where his house had been, but he could not find the remains of his son, who was still a baby. He picked up a kimono from a washtub filled with water and kept that as a memento of him.

Hisayuki still has Nobuyoshi’s black notebook with the title “20th Year of Showa Notebook.” In the entry for August 6, 1945 (the 20th year of Showa), he scribbled faintly in pencil: “Injured. Entire family annihilated.”

Nobuyoshi was not seriously injured but he suffered from acute symptoms of radiation sickness. Mr. Matsumura’s diary states: “He looks pale and the bleeding from his gums won’t stop.” Nobuyoshi died in Hiroshima on August 30, 24 days after the atomic bombing.

More than 70 years later, Nobuyoshi’s niece Machiko Kanai, 66, who lives in Toyama, inquired—“just in case”—whether the names of Nobuyoshi’s family members are included in the register of the A-bomb victims kept under the Cenotaph for the A-bomb Victims in the Peace Memorial Park. She began wondering about this when she first visited Hiroshima for sightseeing in 2016.

As a relative of the victims, she requested that the Hiroshima municipal government check whether their names were included and found out that, except for Nobuyoshi, the names of the other four were missing. She thought of the chagrin of those who were killed in an instant in Hiroshima and were not even registered. “They were among those killed in the atomic bombing. I want to comfort their souls,” she thought. She requested that the municipal government register their names, and they were added to the register in the summer of 2018. This past spring, their names were included in the data from the survey concerning the victims.

The four victims were not included in any other reports carried out by the city, prefecture, or national governments. None of the official institutions had ascertained that the four were killed. Were the city’s efforts or the national government’s investigation conducted after the war sufficient?