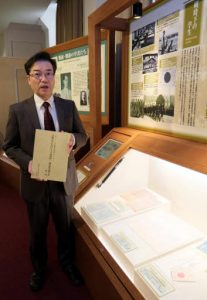 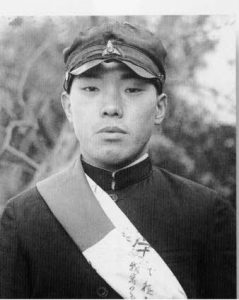 Students victims are “a little-known part of this history”

The victims of the atomic bombing included those who were summoned to Hiroshima by the military, lived far from their homes, and died when the city was attacked. A survey carried out by the government was unable to obtain sufficient information from the bereaved families, who are scattered widely across the country. Even today, the overall picture of the victims remains hazy.

I went over the report from the statistical survey of atomic bomb victims, again and again, seeking clues. The survey was steadily pursued by the City of Hiroshima by sourcing information from the register of the A-bomb victims of Hiroshima and a range of related materials. A simple question then rose in my mind. Back then, there were many students from various Japanese universities in the “military city” of Hiroshima, waiting to be sent off to the front lines as soldiers. However, only a list of names compiled by Waseda University, which lost 30 students, seems to have been referenced by the city when it comes to schools located outside Hiroshima Prefecture.

What about other universities?

“This was completed in 2006. Until then, we didn’t even know how many students had died in Hiroshima.” Shin Nishiyama, 56, a professor of the Kyoto University Archives in the city of Kyoto, placed a thick book on the table. It was a “research report on the departure of Kyoto University students to the front.”

At least 10 students became victims of the A-bombing

In 2004, just prior to the 60th anniversary of the end of World War II, Kyoto University initiated a survey about the students who lost their lives during the war. After close examination of the school register, it turned out that 495 students had died, and at least 10 of them were victims of the atomic bombing of Hiroshima. Among the list of the war dead, which includes such information as “department of economics, died from a disease contracted at the front in the mountains of Luzon,” or “department of law and political science, died in Okinawa due to a suicide mission,” I saw the words: “school of medicine, died in the atomic bombing of Hiroshima.”

In September 1945, a little over one month after the atomic bombing, the Makurazaki typhoon hit Hiroshima. It is known that the typhoon took the lives of researchers from Kyoto University who were in Hiroshima as members of the Scientific Research Council Special Committee for the Investigation of A-bomb Damage. Professor Nishiyama said, “I was surprised to learn that this many people from our school were killed by the atomic bomb. It is a little-known part of this history.”

Although university students were temporarily exempted from military service, that measure was halted toward the end of the war, and they came to be conscripted into the military. In the 1980s, the City of Hiroshima made concerted efforts to compile a list of A-bomb victims from schools and companies, and the register from Waseda University was among these sources.

According to Professor Nishiyama, it was rare for Japanese schools to conduct such a survey in earlier times, as Waseda University did, because, unlike Europe and North America, there were only a few researchers who specialized in studying the subject of “universities,” and resources for this research that bring together and store historical information, like archives, were not available.

Some information is missing

Around 1995, the year which marked the 50th anniversary of the end of the war, universities began pursuing their own investigations. At that point there was a growing trend for universities to face up to their connections to the war. In 2007, Keio University published a register of the war dead which indicated that nine of its students had died in Hiroshima in August 1945. Kyushu University and the University of Tokyo also listed the names of those who became victims of the atomic bomb in their reports.

Although Kyoto University put significant effort into compiling its record, some information is still missing.

For example, a student named Kazumi Mesaki “died on August 12 due to the atomic bombing,” but whether he experienced the bombing of Hiroshima or the bombing of Nagasaki was “unknown.” However, as I investigated the matter further, I discovered that he had died in Hiroshima and his name had already been added to the register of the A-bomb victims.

Mr. Mesaki was from today’s Fukuyama City. He was known for composing standout poetry while a student at the former Hiroshima High School (now Hiroshima University). In January 1945, just before graduation, he joined an army unit in Hiroshima. However, he enrolled at Kyoto Imperial University (now Kyoto University) in the hope of studying sociology.

Kanetaka Mesaki, 62, his nephew who lives in Fukuyama City, said, “My grandparents told me while they were alive that he returned home once after he joined the army and complained, ‘I don’t want war.’”

Including Mr. Mesaki, 11 students at Kyoto University died in the atomic bombing of Hiroshima. Some of them may not be counted in the 89,025 victims, which is the death toll based on the survey conducted by the City of Hiroshima. If the city joins hands with universities across Japan, both may be able to determine the missing names of the victims who were forced to give up their desire to study – and their very lives – and fill in these blanks in their reports.