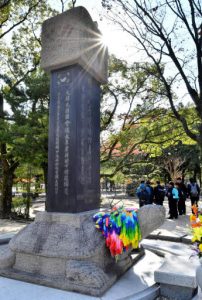 Many Koreans lost their lives, but identifying them is difficult

“I wish I could find more documents about the A-bombed Korean victims somewhere,” Kwon Joon oh, 70, a second-generation A-bomb survivor, said with a deep sigh at the Hiroshima headquarters of the Korean Residents Union in Japan (MINDAN), located in Higashi Ward. Mr. Kwon serves as the vice chair of the Committee Seeking Measures for the Korean A-bomb Victims.

On that day, August 6, 1945, many Korean natives and their families experienced the atomic bombing. They had come to Japan from the Korean Peninsula, which was under Japanese rule back then, because they wanted to escape poverty, were forcibly recruited to work for Japanese companies, or were drafted into the Japanese military. Each summer, Mr. Kwon and other MINDAN members gather in front of the Monument in Memory of the Korean Victims of the A-bomb in the Peace Memorial Park in Naka Ward, and commemorate their comrades.

However, many aspects of the true facts surrounding the damage suffered by Koreans of South Korea and North Korea, as a result of the atomic bombing, remain hazy. In 1976, the cities of both Hiroshima and Nagasaki submitted a request calling for the abolition of nuclear weapons to the United Nations. The request estimated that there were a total of “140,000 plus-minus 10,000” A-bomb victims who had died by the end of 1945, but stated that the number of victims who were from the Korean Peninsula was not at all clear.

According to a survey carried out by the Home Ministry’s Police Bureau at the end of 1944, 81,863 Koreans lived within the borders of Hiroshima Prefecture back then. Hiroshima and Nagasaki (Iwanami Shoten Publishers), a volume compiled by the two A-bombed cities in 1979, estimated that 25,000 to 28,000 Koreans experienced the atomic bombing and 5,000 to 8,000 of these had died as a result. Meanwhile, the Korea Atomic Bomb Victim Association, which was established in Seoul, released an estimate in 1972 which said that 50,000 people experienced the atomic bombing in Hiroshima and 30,000 had died.

An official of the Hiroshima Peace Memorial Museum said, “It is true that many Koreans died because of the atomic bombing, but it’s hard to say that any of the death toll estimates made so far have been based on solid grounds.” The museum completed an update of its exhibition contents in April, but it does not display a specific estimate for this death toll.

Neither the Japanese government nor the South Korean government has investigated the entire picture of the Korean A-bomb victims. In particular, few public documents remain about the A-bomb damage suffered by those who had been recruited for Japanese companies or drafted into military service. To look into information held by the city, Mr. Kwon contacted the Atomic Bomb Survivors Relief Department. Because he witnessed first-hand how his A-bombed parents struggled to go on living after the war, he sees himself as “a person who is positioned very close to the first-generation Korean A-bomb survivors living in Japan.” As a second-generation survivor, he has a strong desire to pass on memories of the Korean A-bomb survivors to the next generation.

However, both the city’s register of the A-bomb victims and the Atomic Bomb Victims Project haven’t classified the victims in detail, such as their nationality and place of birth. Even if we try to extract the names of those who came from the Korean Peninsula, some related documents have sometimes listed their Japanese names, which they had been forced to use under the “Soshi-kaimei” policy of the Japanese government, rather than their original Korean names. Japan’s colonial occupation of the Korean Peninsula, a negative legacy, has cast a shadow over the identification of missing Korean victims, which is part of the missing history of Hiroshima.

In the first place, there are surely a substantial number of Korean A-bomb victims whose names have not been captured by the city.

While some Koreans continued to live in Japan after their experience of the atomic bombing, many of the Korean A-bomb survivors returned to their home country. Some of these people then endured ordeals that included the Korean War, which broke out in 1950, and discrimination against those who had returned from Japan. In addition, until 2003, when the Japanese government abolished the directive issued by the former Ministry of Welfare, which had stated that the Atomic Bomb Survivor’s Certificate was not valid overseas, A-bomb survivors living in other countries were not considered to be eligible to receive aid from the Japanese government.

For the city, the application form for the certificate, which had to be submitted by the survivors, should have been the source of information for grasping the names of family members who perished as a consequence of the atomic bombing. But a countless number of survivors died without receiving the certificate.

“I thought there should be something Hiroshima citizens could do if the city hasn’t confirmed the details of the Korean A-bomb survivors,” said Etsuko Nakatani, 70, the chair of the Hiroshima Branch of the Association of Citizens for Supporting South Korean Atomic Bomb Victims. Ms. Nakatani visited Hapcheon County in South Korea this spring, the area known as “Hiroshima in South Korea” because many Korean A-bomb survivors live there. In 1978, the late Jeong Gijang, an A-bomb survivor who had lived in Hapcheon, visited other survivors within the county and put together survey results from his interviews.

The survey revealed that 5,001 Koreans experienced the atomic bombing, and about 96% of these experienced the bombing of Hiroshima. It also found that 153 people had died in Japan by the end of August 1945, and 268 people were dead within the 12 months that followed the bombing. To check if any primary documents used in the survey, such as the actual survey sheet, still remain, Ms. Nakatani plans to visit Korea again.