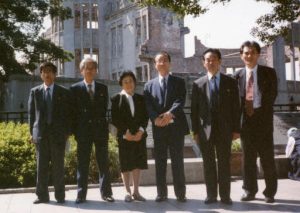 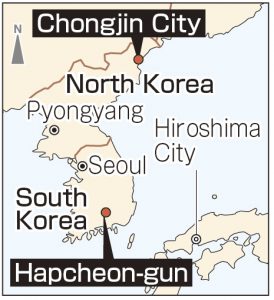 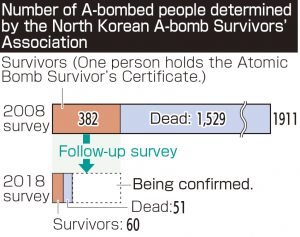 Not eligible for assistance due to lack of diplomatic relations

In the register of the A-bomb victims maintained by the City of Hiroshima, the names of the newly confirmed dead are added each year. Although the task of identifying the deceased has become easier to accomplish, there are still many victims whose names have not yet been listed in the register. Most of these are A-bomb victims who had been living in North Korea, a nation that has no diplomatic relations with Japan.

Anger toward the Japanese government

Pak Yonsang, 76, spoke to the Chugoku Shimbun at his home in Asaminami Ward about his younger brother, Mansang, who lived in Chonjin, North Korea. “My brother was unable to access the relief for atomic bomb survivors provided by the Atomic Bomb Survivors Relief Law, and so his name is not listed in the register of the A-bomb victims,” said Mr. Pak, expressing anger toward the Japanese government.

Mr. Pak’s father was born in present-day Hapcheon-gun, Gyeongsangnam-do, South Korea. Due to the hardships of life under Japanese colonial rule, he moved to Hiroshima.

In the early morning of August 6, 1945, his mother gave birth to Mansang at her home on the outskirts of Hiroshima. Mr. Pak, who was one year old at the time, was headed to his grandparents’ house in Fuchu-cho with his father to receive some food there. They experienced the atomic bombing near Hiroshima Station. His mother and Mansang were also exposed to the radioactive fallout from the bomb when they entered the city center several days later.

After the war, his father supported the family by channeling rice to the black market and by collecting metal. Mr. Pak said, “Although my brother did well at school, our family had no money to send him to university.” In 1963, when Mansang was a third-year student in high school, he moved to North Korea and studied very hard to be a doctor. Mr. Pak and his parents managed a Korean barbecue restaurant in Hiroshima and often sent medical books to Mansang to support his studies.

At a time when it was difficult for families to come and go between Japan and North Korea, Mansang visited his birthplace, Hiroshima, in 1997 as a member of a delegation of A-bomb survivors. In those days, with the former Japanese Ministry of Health and Welfare stipulating that the Atomic Bomb Survivor’s Certificate would not be valid overseas, he chose not to apply for the certificate. Two years later, he suddenly developed kidney disease and died when he was in his mid-50s.

Nearly half of A-bomb survivors died

In 2008, the North Korean A-bomb Survivors’ Association in North Korea announced the results of a survey which indicated that a total of 1,911 A-bomb survivors went to live in North Korea after the war and that 382 of them were confirmed to be alive. A follow-up survey carried out in 2018 obtained information about 111 survivors and found that 51 of them, or nearly half, had already died. It also determined that only one person possessed an Atomic Bomb Survivor’s Certificate.

Mr. Pak has had his parents’ names listed in the register of the A-bomb victims. This is because when a bereaved family returns the Atomic Bomb Survivor’s Certificate to the City of Hiroshima upon the death of an A-bomb survivor, city staff members ask whether or not the family would like to have the name of the deceased listed in the register. With regard to his brother, though, he gave up the idea of getting Mansang’s name listed in the register, too.

Recently, he was surprised to learn that the names of A-bomb survivors who do not hold the Atomic Bomb Survivor’s Certificate can, in fact, be registered. Even so, he does not intend to submit an application. Expressing his frustration, he said, “It makes no sense to have my brother’s name listed in the register if the Japanese government will not treat A-bomb survivors living in North Korea the same way as other survivors.”

A-bomb survivors in North Korea insist that they are the victims of Japanese colonial rule and war and that the Japanese government should apologize to them and provide them with compensation. As a problem needing a speedy solution, they also urge the Japanese government to start providing humanitarian assistance to A-bomb survivors who require medical care. However, relations between Japan and North Korea have not improved, and there has been no progress in providing humanitarian assistance to them.

In 2018, a delegation from the Japan Congress Against A- and-H Bombs (Gensuikin) conducted a fact-finding survey involving A-bomb survivors living in North Korea. The delegation members felt it was important to determine the current conditions of the North Korean A-bomb survivors and to convey the survey results to the Japanese people, particularly given the strained relations between the two nations. Kim Jin Ho, 73, the executive director of the Council of A-bombed Koreans in Hiroshima, said, “The A-bombed survivors are getting old and they have no time to lose.” As long as the Japanese government leaves the assistance issue untouched, the names of the missing A-bomb victims cannot be identified.