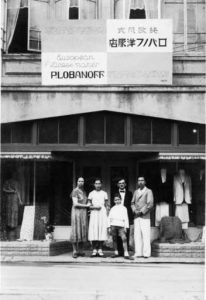 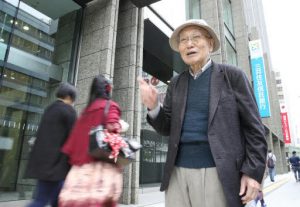 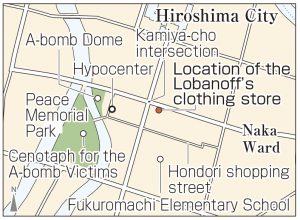 There is a busy intersection in the heart of Hiroshima, in Kamiyo-cho, Naka Ward, where many people and vehicles come and go. Before the atomic bombing of the city, a European dressmaking shop, “European Dressmaker Lobanoff,” stood on one corner of the former Togiya-cho district, which was located nearby. The shop was operated by Paul Lobanoff, a White Russian who defected from Russia to Hiroshima in 1917 in his opposition to the Russian Revolution.

“From the clothes-drying platform of my house, I could see the chandelier hanging on the second floor of the Lobanoff’s house,” said Shoji Sumida, 93, a resident of Nishi Ward, nostalgically. Mr. Sumida was a neighbor who lived diagonally across from the Lobanoff family until the year prior to the bombing.

A group of White Russians could occasionally be seen visiting the Lobanoff’s house and sitting around a table. “I think they were singing folk songs. They sang them in choral parts, and since we only knew how to sing in unison, their singing style seemed quite new to us and we listened closely.” Kimiko Kawamoto, Mr. Sumida’s sister who died last year at the age of 97, said during her life, “When I delivered circulars to the Lobanoff’s house, I smelled butter from the opposite side of the entrance door of the house.”

On August 6, 1945, the Togiya-cho district, which was located approximately 300 meters from the hypocenter, was destroyed in an instant when the atomic bomb exploded. It is said that approximately 90% of the residents died there and then.

Kazuko Josaka, 84, a resident of Naka Ward whose relative was the owner of the Lobanoff’s house and who lived in that neighborhood, avoided becoming a victim of the atomic bomb because she had been evacuated out of the city with other students during the war. Her father, Shoichi Mimura (who died in 1980 at the age of 84) was not at home and was therefore not directly exposed to the atomic bomb at a close distance. He did, however, lose his wife and his second daughter to the atomic bomb. He created a list of the community’s atomic bomb victims with other Togiya-cho residents and conducted a memorial service. Then he submitted the original text of the register book to a temple and asked them to take care of the book. In the register book, there was an entry that reads “White Russian Paul Lobanoff and four others.”

Of those five people, most likely the members of the Lobanoff family, only two names were recorded: Sergei Lobanoff in a list of the 1936 graduates of Fukuromachi National School (now Fukuromachi Elementary School in Naka Ward) and Paul Lobanoff in his parents’ column. It is not clear how the Lobanoff family came to Hiroshima or whether all five people actually died in the atomic bombing. Even the names of all five people are not known.

However, there is reliable information that only Sergei survived. Kenji Fukui, who was his classmate at Fukuromachi Elementary School (and who died last year at the age of 94), said that he once came across Sergei on the Hondori shopping street (in Naka Ward) after the war. In an interview with the Chugoku Shimbun in 2009, Mr. Fukui said that Sergei told him that he was in Harbin (in former Manchuria in northeastern China). Ms. Josaka said, “About 20 years ago, I heard from one of the former residents that Sergei went to New York after the war.”

To determine the truth involving the fate of the Lobanoff family, the Chugoku Shimbun visited Petr Podalko, a professor at Aoyama Gakuin University who is well-versed in the history of the White Russians.

Mr. Podalko said that many of the White Russian defectors moved to third countries like the United States and Australia after the war. He therefore thinks it is not surprising to believe that the Lobanoff family moved to New York if they had survived. He added, however, “The data on A-bombed White Russians is extremely scarce.”

During the Cold War, White Russians were regarded as a counterrevolutionary force and a national enemy in the former Soviet Union, where communism had taken hold. Some of them left their country and moved to Hiroshima. It is said that a total of 13 people from six White Russian families experienced the atomic bombing and that five people died by the autumn of 1945. This matter, though, is hardly known among the Russian people.

There are very few records relating to the Lobanoff family. Were there any bereaved family members or friends of the family who tried to apply to have their names registered as they mourned their deaths? Despite efforts to find information about the family, the Chugoku Shimbun could not find the names of all the family members or their whereabouts after the war. In the spring of this year, the Hiroshima Peace Memorial Museum opened a permanent exhibit which includes a photograph of five people posing in front of the Lobanoff’s clothing store. This one picture provides evidence of the Lobanoff family’s existence in Hiroshima.