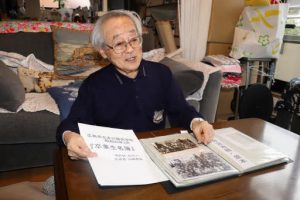 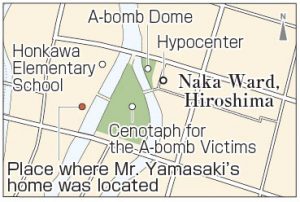 “Privacy protection” by the local government hinders search for names

“They say that a man dies twice. The first time he dies is when he dies physically and the second time he dies is when no one remembers him. When I go to heaven, I want to tell the friends that have died before me that I didn’t forget them and that I continued to look for them my whole life,” said Yasuhiro Yamasaki, 86, a resident of Kawanishi, Hyogo Prefecture.

Listing the names of his old elementary school classmates

Honkawa National School (now Honkawa Elementary School in Naka Ward) is the school located closest to the hypocenter of the atomic bomb. On the day of the atomic bombing — August 6, 1945 — the school building was annihilated in an instant. Mr. Yamasaki had graduated from the school just four months earlier. He has made longtime efforts to trace the whereabouts of his former classmates at the elementary school and recreate a list of their names.

After graduating from Honkawa National School, Mr. Yamasaki’s classmates entered either junior high school or a national advanced school. But they had almost no chance to take any lessons at all as this was around the end of the war. Instead, they were mobilized to work at military factories or fields inside and outside the city. In particular, the atomic bombing killed many mobilized students who were engaged in work to tear down houses in the central part of the city to create fire lanes. Because it was so close to the hypocenter, the Honkawa area was completely destroyed.

Mr. Yamasaki was a first-year student at the junior high school affiliated with the Hiroshima Higher Normal School (now the junior high school affiliated with Hiroshima University). Starting on August 4, he felt ill and so he stayed at an acquaintance’s house on Noumi Island (now part of Etajima City) to rest with his parents and youngest brother. On the morning of August 6, he saw an enormous fireball suddenly rising up in the sky to the north. Something terrible has happened in Hiroshima, he thought. The next day he returned to his home in Tsukamoto-cho (now called Dobashi-cho in Naka Ward). The site was still very hot because of the fire that had swept through the area.

His home was located about 500 meters from the hypocenter. In the ruins, lying near the living room, were the charred bodies of his elder sister Michiko, then 13, and his younger brother Koji, then seven. Day after day, he also searched for another younger brother whose name was Koshiro and was five at the time. When he dug through the rubble of the collapsed storehouse that had belonged to his neighbor, he found a small piece of human bone. The bodies of his aunt and her husband, who had been living with them, were never found. In all, he lost 16 family members and relatives as a result of the atomic bombing.

Afterwards, Mr. Yamasaki studied at Kyoto University and worked for a laboratory linked to the former Ministry of International Trade and Industry as an expert in optics technology. In 2006, at the age of 73, he began to create a list of his former elementary school classmates after feeling moved by a former classmate from junior high school who had looked for an old friend that he had been unable to contact after the war ended.

Wondering what to do, he contacted Honkawa Elementary School, his old school. Someone at the school told him that the documents that had existed prior to the bombing had all been burned up. He then decided to complete his own list of names.

Mr. Yamasaki did an exhaustive search of the information and photos of A-bomb victims that had been registered at the Hiroshima National Peace Memorial Hall for the Atomic Bomb Victims in Naka Ward, the name lists of alumni associations at junior and senior high schools, and “The Mobilized Students Magazine” that was published by the Hiroshima Prefecture Mobilized Student Victims Association in 1968. When he was able to locate the whereabouts of former classmates, he reached out to them seeking further information.

A circle of sympathy for his efforts expanded among his classmates, and they came together for a class reunion eight years ago. So far, the whereabouts of a total of 139 classmates have been traced: 32 survivors and 107 people who have died, including those who died because of the atomic bombing. But the fates of at least 30 more former classmates remain unclear.

Mr. Yamasaki’s efforts have also been impeded by the protection of personal information. Even when he has been able to confer with the alumni associations of junior and senior high schools in Hiroshima, which his classmates had entered after graduating from elementary school, it has become increasingly difficult for him to see the list of names of these alumni associations because of privacy concerns.

Is there any other documentation that he can consult? Sympathetic to Mr. Yamasaki’s search, the Chugoku Shimbun contacted Honkawa Elementary School for information, and was told that a list of A-bomb victims from Honkawa National Advanced School was available. However, it turned out that the Chugoku Shimbun was not allowed to see the list because the city’s board of education concluded that viewing it was impermissible because it contained personal information such as the names and addresses of the victims.

Mr. Yamasaki’s eyesight is now failing and he can barely see. His wife Hideko, 82, serves as his eyes and stays alert to information related to the atomic bombing so as not to miss anything that might aid her husband’s search. Mr. Yamasaki is still determined to trace the whereabouts of his old elementary school friends. He said, “The list will be incomplete until I can identify them all.”

Can the government do more to assist with such grassroots efforts? The information that Mr. Yamasaki has gathered can surely provide clues for the city’s efforts, too, as it continues to investigate and gather the names of the A-bomb victims.