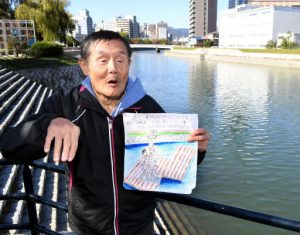 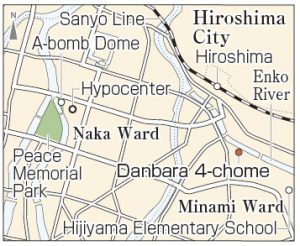 Real name and age are uncertain

Masao Tanaka, an A-bomb survivor living in Minami Ward, Hiroshima, enjoys working with his fellow workers at a sheltered workshop called “I Love Sagyosho” in Naka Ward. It is a place that employs people who have a hearing impairment. Mr. Tanaka is good at drawing and has a cheerful nature. However, he also feels deep anguish in that he does not know his real name. He became separated from his family on the day of the atomic bombing — August 6, 1945 — when he was around four or five years old, which means he is now roughly 79.

“I wish I could see my parents again.” Interviewed by the Chugoku Shimbun, Mr. Tanaka shared this earnest wish in sign language. He has tried his best to recall the dim memories he has of his early childhood.

Before the atomic bombing of Hiroshima, He lived in a wooden, one-story house with five family members that included his mother and his siblings. He remembers that there was a mountain nearby their home and that his father was not living with them. He said, “I suppose my father had been sent off to battle.” As he could not hear or speak, he has no memories of playing with other children in the neighborhood.

On the morning of August 6, he was at home and had just finished eating rice balls prepared by his mother, when the atomic bomb exploded above Hiroshima. The tatami mat floors in his house suddenly rose up. He crawled under the floor toward some rays of sunlight, but ended up falling into a river. He frantically tried to keep his head above water and cried out for help. A young man on a raft pulled him up onto the raft. All around him, there were people lying on the raft.

His memories end there. It is thought that he was taken to a shelter for lost children which was set up at Hijiyama National School (now, Hijiyama Elementary School in Minami Ward) two days after the atomic bombing. A teacher noted in his account in the Record of the A-Bomb Disaster issued by the City of Hiroshima that there was a deaf boy named Masao Tanaka.

From 1946, Mr. Tanaka was brought up in the Hiroshima War Orphans Foster Home in the Itsukaichi district (part of present-day Saeki Ward), which looked after A-bomb orphans. In the foster home’s records, the estimated date of his birth was October 10, 1940. He attended Hiroshima Prefectural Hiroshima School for the Deaf. In 1960, when he became an adult, he created his own family register. He worked at a place that made shoji screens, a lumber mill, and other companies and went on living with all his might. But where were his mother and father? And what was his name? He lived his life while always seeking his parents and his identity.

At the workshop, “I Love Sagyosho,” where he began working nine years ago, Mr. Tanaka encountered a caring person who understood his feelings and sought sincerely to help him. It was Hiromi Okimoto, 57, the administrator of the workshop.

One day, Ms. Okimoto was shown one of the pictures that Mr. Tanaka drew using colored pencils. The picture depicted a little child held by a soldier on a raft with “Name?” written on it. Ms. Okimoto felt the grief that lay deep in Mr. Tanaka’s heart.

Ever since that day, Ms. Okimoto and Mr. Tanaka have spent time together walking around the city, hoping to prod his memory. At one location Mr. Tanaka suddenly stopped and said, “I remember this scene.” It was at a corner along the Enko River in Danbara 4-chome in Minami Ward. Mr. Tanaka said, “There were houses standing on the side of the river. I was going down the river on a raft.” But he was unable to remember anything more.

When we walk along the streets of Hiroshima, with nothing particular on our minds, we never realize that there are still people walking around the same A-bombed city in search of a clue that could help fill the void in their life that was snatched away from them by the atomic bomb. We need to bring together the memories of the A-bomb survivors from the time of the bombing and the relevant information of younger people who wish to listen to the survivors’ memories, and we must continue to make efforts to fill in even small pieces of these voids.

When we hear about, and talk about, the number of A-bomb victims — as many as “140,000 plus-minus 10,000” — how much do we think about the individual victims whose names and existence have remained missing? Do we share the awareness that the people and things that are connected to the atomic bombing are not people and things of the past? Even now, with the 75th anniversary year of the A-bomb attack approaching, the postwar era has not ended. And there is still much research to do to continue clarifying the reality of the atomic bombing.