World without nuclear weapons, crimes against humanity discussed at international symposium in Hiroshima 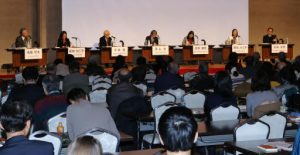 An international symposium titled “Towards a World Without Nuclear Weapons and Crimes Against Humanity” was held at the International Conference Center Hiroshima on December 15. The symposium was organized by Hiroshima City University, the Chugoku Shimbun, and the Research Center for Nuclear Weapons Abolition (RECNA) at Nagasaki University. Participants discussed, from a humanitarian perspective, human rights violations being repeated in conflict zones overseas as well as possession and use of nuclear weapons.

The keynote address was delivered by Kuniko Ozaki, former judge of the International Criminal Court (ICC) in The Hague, the Netherlands. Ms. Ozaki spoke about ICC’s role and the history behind how the international court was established 17 years ago. The ICC investigates individuals responsible for such crimes as organized genocide and sexual violence in disputed areas, among other places. She pointed out as a challenge the fact that superpowers including the United States, Russia, and China, as well as powerful countries in the Middle East and Asia, still are not ICC members.

“ICC aims to pass fair judgment on crimes to prevent similar offenses from recurring,” Ms. Ozaki said. She called on the audience of around 280 “to be, in the first place, interested in and motivated to learn about these issues.”

Takashi Hiraoka, former Hiroshima mayor, spoke next in front of the symposium participants. Mr. Hiraoka recalled his experience of testifying before the International Court of Justice (ICJ) in 1995, when he declared the use of or threatening the use of nuclear weapons to be “a clear violation of international law,” in opposition to the Japanese government’s view. In his talk at the symposium, Mr. Hiraoka criticized the government’s stance. “The pillar supporting the principle of nuclear abolition is the fear of the inhumanity of nuclear weapons.”

Joining later discussions were Akira Mayama, a professor at the Graduate School of International Public Policy at Osaka University, Yasue Mochizuki, a professor at the School of Law and Politics at Kwansei Gakuin University, and Rumiko Seya, Director of the Japan Center for Conflict Prevention. Five junior writers of the Chugoku Shimbun announced proposals put together by young people for realization of a peaceful world.