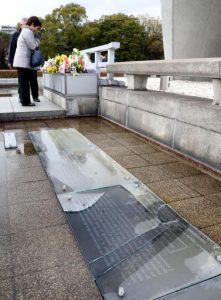 On December 14, it emerged that one of the explanatory glass plates installed at the Pond of Peace had been damaged. The Pond of Peace is located adjacent to the Monument for the A-bomb Victims in Hiroshima Peace Memorial Park in the city’s Naka Ward. Hiroshima City learned of the incident from a report made by a park visitor on December 10 and is now investigating the cause.

The plate is 60 centimeters high, 90 cm wide, and one cm thick. The eight plates that lie at the base in front of the pond offer explanations about the Cenotaph for the A-bomb Victims in eight languages, including Japanese, English, and Chinese. The Italian-language plate was found with several cracks extending across its entire width.

According to Hiroshima City’s Peace Promotion Division, a visitor to the Hiroshima Peace Memorial Museum notified the museum’s information desk of the damage on the afternoon of December 10. The city staff then checked security camera footage taken the previous night, but no suspicious activity was apparent. Because it was unclear whether the damage was caused by the glass itself or a human action, Hiroshima City did not report to police or publicize the issue. The city government has since asked a glass expert to investigate and is considering the best way to repair the damage.

The eight plates were donated at the end of October to Hiroshima City by the Rotary Club of Hiroshima West as a welcome to Pope Francis for his visit to the Peace Park in November, as well as to commemorate the 50th anniversary of the club’s founding. “The damage to the plate is shocking, especially because it occurred only slightly more than one month after the plate had been installed,” said Yasushi Shinbara, 59, chair of the Rotary Club’s Commemoration Project Committee. “But I choose to believe the damage didn’t result from vandalism.”