Photos of Hiroshima, taken before the A-bombing by Wakaji Matsumoto, Japanese immigrant to the U.S., to be exhibited in the U.S. in 2021 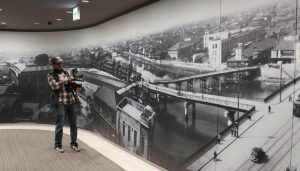 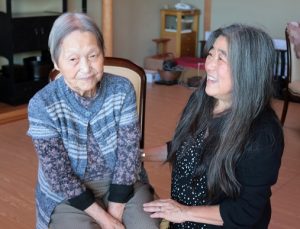 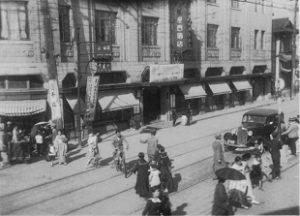 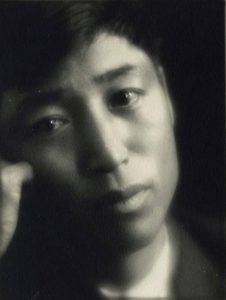 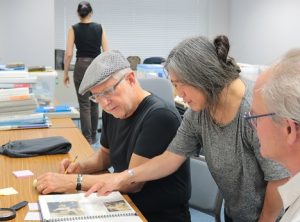 A special photographic exhibition featuring Wakaji Matsumoto (1889-1965) who took many photos of Los Angeles, U.S., where he emigrated, and of Hiroshima before the dropping of the atomic bomb, will be held at the Japanese American National Museum in Los Angeles starting around February 2021. Wakaji’s granddaughter, Karen Matsumoto, 65, who lives in the state of Washington and who is organizing the exhibition, stayed in Hiroshima City in November with museum staff to collect items to be exhibited, and videotape the exhibition.

The title of the exhibition is “Wakaji Matsumoto: An Artist in Two Worlds, Los Angeles and Hiroshima, 1917-1944.” This exhibition challenges visitors about what was lost as a result of the U.S. dropping the atomic bomb on Hiroshima through photos that vividly capture the liveliness of the town and the people’s daily lives. Most of the 80 to 100 photos to be exhibited are being released to the public for the first time in the United States.

Photos scheduled to be on exhibit include those of a trade fair held at the Hiroshima Prefectural Industrial Promotion Hall (present-day A-bomb Dome), the hustle and bustle of the busy Hondori shopping street, and people coming and going along avenues lined with streetcar tracks. Wakaji Matsumoto also took the panoramic photo depicting the townscape of the area around the Aioi Bridge, now exhibited at the beginning of the Peace Memorial Museum tour route, in 1938. The U.S. exhibition will also display photos of Japanese immigrants living in the U.S. to show the roles played by the first generation Japanese in American society.

While staying in Hiroshima, Karen and museum staff visited the Hiroshima Municipal Archives, which archives about 10,000 of Wakaji’s photos and personal belongings, and selected the items for the exhibition. Akira Boch, 48, a videographer living in Los Angeles, recorded interviews with Shizue Kawamoto, 94, Wakaji’s second daughter who lives in Hatsukaichi City; Kazuhiko Takano, 63, the director of the Hiroshima City Museum of History and Traditional Crafts; Masami Nishimoto, 63, a senior staff writer of the Chugoku Shimbun, and others. Mr. Boch will produce video works that trace Wakaji’s footsteps and will present it at the exhibition venue.

Wakaji moved to the United States in 1906 when he was 17 years old. While making his living as a farmer, he mastered the latest photographic techniques, and in 1927, returned to Japan and opened the “Hiroshima Photography Studio” near the Kamiya-cho intersection in Sarugaku-cho (now Motomachi, Naka Ward). He took a wide variety of photos of events, incidents, and accidents. He closed his photo studio in 1942 and took the photo albums to his parents’ home in Jigozen Village (now part of Hatsukaichi City), thus saving them from the destruction caused by the atomic bombing. Wakaji’s photos are described (by Mr. Takano) as first-rate materials, which provide a glance of people’s lives in Hiroshima before the atomic bombing.

Related article
Special exhibition of Wakaji Matsumoto’s photos to be held at The Japanese American National Museum in Los Angeles in 2021(Originally published on December 17, 2019)