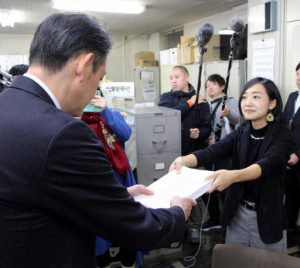 Following the prefectural government’s announcement of its draft of preserving one and demolish two buildings of the former Army Clothing Depot, on December 16, a residents’ group submitted 11,907 signatures, calling for preserving all the structures. The buildings are among the biggest remaining structures that survived the atomic bombing of the city. Signatures were collected via the Internet.

The group was formed to call for preserving and making use of the buildings after the prefectural government’s draft was announced. The group began collecting signatures on December 10. Two female members of the group visited the prefectural office on December 16, and Mayu Seto, 28, a resident of the city of Kure, handed the signatures to Taiki Adachi, head of the prefecture’s Property Administration Division.

Ms. Seto requested him not to demolish any building, saying “We are not opposed to taking safety measures, but the sheer scale of the three buildings standing together is of great value.” Trying to gain their understanding, Mr. Adachi said, “If they collapse in the event of an earthquake, they could put private houses across the street or pedestrians in danger. Safety should be given the highest priority.”

Three other groups, including the Hiroshima prefectural chapter of the Japan Council against Atomic and Hydrogen Bombs (Gensuikyo) based in Higashi Ward of Hiroshima, met Mr. Adachi in the prefectural assembly building and handed him written requests calling for the preservation of the three structures and securing a necessary budget for the preservation. Nobuo Takahashi, the director of Hiroshima Gensuikyo, said to Mr. Adachi, “As A-bomb survivors are aging, those structures that tell the reality of the atomic bombing are of historical importance.”