Life and death of a Hiroshima Girl, Part 1: Scars of the atomic bombing 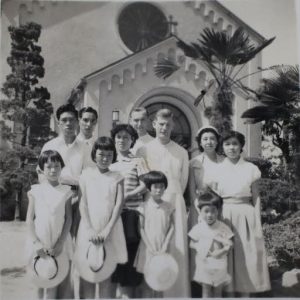 Seeking peace of mind in God

Letters and diaries written by Tomoko Nakabayashi, one of the “Hiroshima Girls” who traveled to the United States to receive medical treatment for their A-bomb injuries, have been found. Tomoko died in 1956 at the age of 27 while in a hospital in New York. This series of articles will follow the trajectory of her life, which she was unable to share herself, as well as her death, and look at the damage wrought by the atomic bomb on human beings.

“I wish she had lived. Even in my old age, I still feel frustrated.” Eiko Shinohara, 91, Tomoko’s elder sister and a resident of Mitaka, Tokyo, took out six airmail letters, with 10-cent stamps, from a small box. They were mailed by Tomoko between June 1955 and April 1956. The letters were written with a fountain pen, and every inch of the paper is covered with writing. She also keeps the baby clothes that Tomoko sent to her before Eiko had her first child.

Shigeko Inoue, 83, Tomoko’s younger sister who lives in Suginami Ward, Tokyo, opened Tomoko’s diary written in two A-5 size notebooks. Her diary entries begin on May 10, the day after she arrived in New York, and end on July 12, 1955. Shigeko described Tomoko as “quiet but strong-willed.”

The three sisters were born and raised in Tokyo. Their father was an official in the former Patent Bureau. The family moved to Hiroshima, where their paternal grandmother was living, after the Great Tokyo Air Raids of March 10, 1945. They lived in Hakushima-Kitamachi (now part of Naka Ward).

On August 6, 1945, Eiko was at the Hiroshima Railway Bureau in Minami Ward, engaging in work for the war effort, when the city was attacked with the atomic bomb. She was carried into the outskirts of town on someone’s back. Tomoko was exposed to the bomb at the Hiroshima Prefectural Industrial Research Institute, her workplace in Higashi-Hakushima-cho (now part of Naka Ward). Shigeko and their parents were at home at the time. After the blast, Tomoko returned home “nearly blind.” They fled to Chojuen, which was close to their home.

Their father, Hajime, and mother, Miharu, did what they could to treat Tomoko’s burns by applying grated cucumber, but her body was marred by dreadful keloid scars. She was unable to bend or stretch out her right elbow, and the fingers on her left hand became stuck together.

She put her mind to making hats

“Tomoko would sometimes cry as she looked at her fingers.” When Shigeko said this, Eiko added, “But she put her mind to making hats, using the fingers she could move. Unlike us, she was clever with her hands.”

Tomoko went to Miki Dressmaking School in Hashimoto-cho (Naka Ward), then studied with a designer in Tokyo who supplied the Imperial family with clothes for a while. After she returned to Hiroshima, she became an instructor at her old school.

On December 24, 1950, Tomoko was baptized at Catholic Misasa Church (Nishi Ward). She had graduated from a Christian high school for girls in Tokyo with her year-older sister. This graduation took place one year earlier than expected due to special measures taken during the wartime. The baptism was performed by Father Makoto Takakura, who experienced the atomic bombing while at Noboricho Church (Naka Ward) and became a naturalized Japanese citizen from Germany after the war. (He died in 1978.)

Imagining Tomoko’s feelings, Eiko said, “I think she wanted to gain strength by believing in God, to have something to turn to for help.” Tomoko underwent an operation on her right elbow in Hiroshima. In the summer, she even enjoyed swimming in the Seto Inland Sea with Eiko’s friends.

In April 1955, Norman Cousins, the editor-in-chief of a literary journal in the United States, paid a return visit to Hiroshima, from New York, with two surgeons. Two years before this, he had met the “Hiroshima Maidens,” a group led by the pastor Kiyoshi Tanimoto at Nagarekawa Church. After that, Mr. Cousins sought out support to provide them with medical treatment in the United States. At the time, Japan was still in the midst of reconstruction from the war and there was no assistance being offered to the atomic bomb survivors.

Parting at the airport became the last farewell

Some people were suspicious of this effort to provide treatment to A-bombed women in the country which dropped the atomic bomb, and viewed it coolly. But the Atomic Bomb Casualty Council, which was chaired by the mayor of Hiroshima and established in 1953 with the determination of doctors in the A-bombed city, lent their support and helped conduct preliminary medical examinations of the young women at Hiroshima City Hospital over the course of three days.

Taking into account the effects of plastic surgery and the women’s physical strength, the organizers selected 25 women to travel to the United States for treatment. These women, dubbed the “Hiroshima Girls” there, helped raise awareness of the A-bomb victims among the American people.

On May 5, 1955, the group boarded a U.S. military aircraft at the airport in Iwakuni. Tomoko’s parents and sisters were there to see her off. Tomoko, wearing a beret that she had made herself, looked out at them from a window and pointed to herself. They never dreamed that this would turn out to be their final farewell.